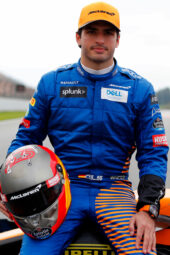 As the son of a former World Rally Champion who shares his name, Carlos Sainz has a racing pedigree that matched his first team-mate Max Verstappen, son of Jos Verstappen.

Sainz and Verstappen did some a battle at Toro Rosso in 2015, in what is one of the most fascinating sub-plots to an intriguing season.

Sainz is a latecomer to the grid, as he wasn’t expected to be racing in Formula 1 in 2015.

Sebastian Vettel’s move to Ferrari freed up some room at Red Bull and the management picked Toro Rosso’s Daniil Kvyat. 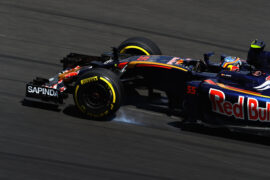 However, Sainz should not be taken lightly. His junior career is impressive and it is clear he has raw speed and potential. But the 20-year-old has been fast-tracked into motorsport’s top division after just a solitary season in GP3 and a Formula Renault 3.5 championship last season.

Toro Rosso are were confident that Sainz would be a success, and both they and Red Bull were impressed with how he has performed in testing events. That’s no substitute for the real thing though, and Sainz will be scrutinised from the start.

2016 was a good season for Carlos he scored 46 points and finished 6th as best result in 3 races. If it wasn't for Max Verstappen he certainly would have replaced Daniil Kvyat instead of Max. The Toro Rosso STR11 was a very good chassis, except the 2015 Ferrari power unit wasn't up to the job to show their real speed. 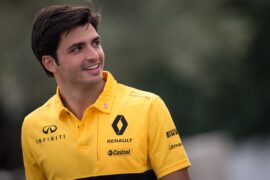 In the 2017 season, Sainz showed his skill with the Renault powered Toro Rosso STR12. The car was compared to the grid about as fast as last years STR11. But his performance compared to his teammate Daniel Kvyat was outstanding. The Spanish driver scored 48 points while the Russian driver only scored 4 points at Toro Rosso.

Because underperforming Renault driver Jolyon Palmer had to leave and McLaren wanted to get rid of their Honda engine nightmare, Carlos got an opportunity to switch from Toro Rosso to factory team Renault. He was allowed to race the last four races for Renault and was giving his new teammate Nico Hulkenberg a hard time at the moment he stepped in the RS17.

In the start of 2018, Renault thought they would be closer to the top 3 teams. Carlos was able to score 1 point in Melbourne but was hoping to do better than his teammate Hulkenberg who finished 7th in the championship with 69 points. Sainz scored a total of 53 points in 2018. His best result was 6th in the last race of the season at Abu Dhabi.

In 2019 he replaced the empty seat at McLaren, that was leftover by Fernando Alonso's F1 exit. His teammate will be the youngest McLaren driver ever: Lando Norris. The current season started with problems for the Spanish driver. He out-qualified Norris in the first three races but was not able to score points in that span.

On the 28th of April, Sainz scored his first points for McLaren at the Azerbaijan Grand Prix, with a solid 7th place. That race started a streak of high-quality performances which helped the Spaniard to score points in eight of the last nine Grands Prix before the summer break, including two 5th places in a row in Germany and Hungary. 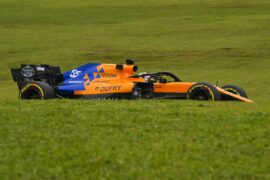 Sainz scored points in just three of the first seven races of the second half of 2019, he earned his first podium with an amazing drive during the 2019 Brazilian Grand Prix. Sainz's car lost power during Q1 and he had to start the race from 20th of the grid. In the race, he spent the first half of the race making great overtaking manoeuvres.

Two late Safety Car periods and brave calls by the McLaren pit wall put Sainz in position to score a good amount of points. With the Ferraris of Sebastian Vettel and Charles Leclerc out and the fight between Lewis Hamilton and Alex Albon, Sainz finished the race in fourth. Hamilton admitted responsibility in a crash which sent Albon to the back of the grid and was given a 5-second penalty after the race.

Sainz was promoted to third but was under investigation for illegal use of the DRS, however, he was not penalized and kept his third place. Sainz's first podium in 101 F1 starts was McLaren's first since the 2014 Australian Grand Prix.

He finished 2019 in sixth place in the WDC with 96 points, the best tally in his Formula 1 career. His sixth-place was the highest finish for a McLaren driver since Lewis Hamilton finished fourth in 2012.

The 2020 F1 season started slowly for Sainz, with reliability even preventing him from starting the 2020 Belgian Grand Prix. Still, the Spaniard scored the second podium of his career in the 2020 Italian Grand Prix, where he even had a big chance to take his first GP win. 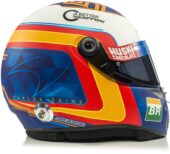 Carlos Sainz of Scuderia Toro Rosso STR12 on track during qualifying for the Australian Formula One Grand Prix at Albert Park on March 25, 2017 in Melbourne.

Giovinazzi was gutted to hear his Ferrari chance was lost

Jan.20 - Antonio Giovinazzi has admitted he didn't take news of Carlos Sainz's Ferrari seat for 2021 "all that well". The 27-year-old has been retained by Alfa Romeo and remains a..

Binotto has 'no regrets' about not signing Hamilton

Jan.14 - Ferrari has no "regret" after failing to make a serious bid to snap up Lewis Hamilton for 2021. That is the claim of the Maranello team's boss Mattia Binotto, as reports..

Jan.13 - Carlos Sainz is en route to Maranello, where he is tipped to get his first taste of life at the wheel of a Ferrari with a test in the 2019 car. The Spaniard told his fans..

Jan.12 - Carlos Sainz's famous father is not worried his son will clash with Charles Leclerc at Ferrari this year. Sainz jr is moving from McLaren to Ferrari for 2021 to replace..

Sainz hasn't got any doubts about his move to Ferrari

Jan.11 - Most drivers in Formula 1 would have jumped at the opportunity to sign for Ferrari, according to Carlos Sainz. Given the Maranello team's performance slump in 2020, many..

Dec.22 - Carlos Sainz admits he hopes to stay at Ferrari for longer than the duration of his initial two-year contract. "Our common goal is for these two years to be successful,"..

While the Abu Dhabi Grand Prix isn't going to go down as a thriller for anyone watching at home, it was the most tense and emotional experience we’ve had in quite a

McLaren selling one third of team for $245m

Dec.13 - McLaren is reportedly selling 33 percent of its famous Formula 1 team for some $245 million. The team has declined to comment, but Sky News' highly respected City editor..

Sainz thinks there is no logic behind young drivers test

Dec.11 - There is "no logic" to the FIA's decision to allow some experienced drivers to test after the Abu Dhabi finale but not others. That is the view of both Carlos Sainz and..

FIA says no to 'young driver' test for Vettel & Sainz

Dec.10 - Current Formula 1 drivers have been told by the FIA that they are not eligible to do the 'young driver test' in Abu Dhabi after this weekend's 2020 finale. The issue..