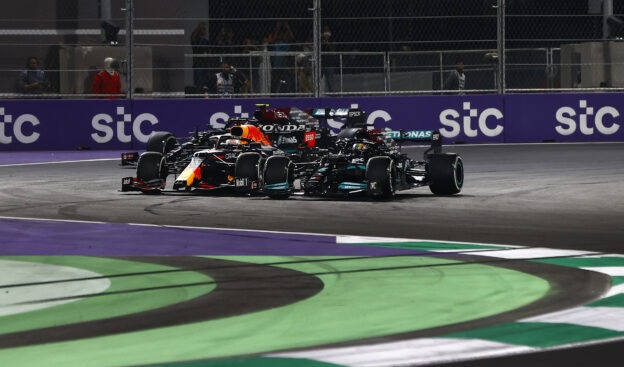 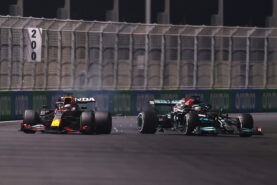 Lewis Hamilton scored his 103rd race win today. The British driver won the first ever Saudi Arabian F1 GP. It was his 8th race win of the 2021 season. The Mercedes driver started from pole. It was the 124th race win for Mercedes.

The start of the race was after sunset and the fastest street circuit was light up by floodlights. All cars got away without any incidents and even came through the first lap without any yellow flags. In the other earlier 5 races the start all had first lap incidents. Lewis Hamilton kept the lead and nobody lost a place in the top 10. After 5 laps Hamilton only was 1.5s clear of Valtteri Bottas and Max Verstappen was 1.4s behind on P3.

In lap 10 Mick Schumacher crashed the Haas in turn 23. A safety car was deployed to slow down the field and recover the the crashed car of Schumacher. Hamilton pitted to get a new set of hard tyres. Verstappen didn't pit and got the lead of the race. A lot of other cars pitted also. Drivers who did a pitstop were Sergio Perez, Valtteri Bottas, Charles Leclerc, Lando Norris, Fernando Alonso, George Russell, Lance Stroll and Nicholas Latifi.

The safety car period ended in lap 13 when the race was stopped with a red flag. Because teams are allowed to change tyres during a red flag period, which gave the drivers who didn't do a pitstop earlier got a free pitstop. Verstappen changed to the hard tyres to try and drive to the finish. The race was restarted by a standing start. A lot of drivers even had switched to a new set of medium tyres.

At the restart Hamilton had a great start, while Verstappen had a slow getaway. He cut the second corner to stay ahead of Hamilton. Esteban Ocon also had a great start in the Alpine and even got in front of Hamilton. Valtteri Bottas almost hit the back of Verstappen's Red Bull. Further back Charles Leclerc in the Ferrari got collided with the Red Bull of Sergio Perez, because there was no room. Nikita Mazepin crashed into the back of George Russell's Williams. Both drivers retired and the race again got red flagged to clean up the track.

During the red flag situation Verstappen was offered a deal to start behind Hamilton to not get a penalty for overtaking Hamilton in turn 2 out of the circuit. The second restart Verstappen had medium tyres. Verstappen overtook both Hamilton and Ocon in turn 1 and got the lead of the race, while Ocon settled for 2nd, Hamilton was 3rd and Ricciardo was 4th.

One lap Hamilton overtook Ocon for P2 to try and put pressure on his title rival. Ocon now was 3rd, Ricciardo was 4th and Bottas was 5th. In lap 24 Aston Martin driver Sebastian Vettel and AlphaTauri driver Yuki Tsunoda collided. The front wing of Tsunoda was left on the track and caused a short virtual safety car period. Both drivers were able to go on. bot lost a lot of places. Vettel now was 11th and Tsunoda who had to drive to the pits for a new front wing even dropped to P16 and was last. Verstappen and Hamilton now were 11 sec. in front of Ocon who was on P3.

In lap 28 another virtual safety car period was used to pick up some debris of the Vettel's car. The German driver collided with his old Ferrari teammate Kimi Raikkonen when battling for position. In lap 29 again a virtual safety car was used to clean up the track. Verstappen now was 2 sec. in front of Hamilton. In lap 33 the track was clear and the race was restarted again.

In lap 36 again a very short virtual safety car was used to clean up debris that was left on the track by the damaged car of Vettel. When the race was restarted Hamilton got very close to overtake Verstappen and was faster on the mainstraight. Verstappen didn't want to give up and brake very late and gone wide. The Red Bull team told Verstappen to slow down and let Hamilton pass. When he did that Hamilton hesitated and Verstappen slowed down even more, but Hamilton didn't understand what was happening and drove into the Red Bull and damaged his front wing.

In lap 44 Hamilton overtook Verstappen for the lead of the race. Verstappen wanted to pit to get a set of soft tyres, but because he received a 5 sec. penalty he could pit. If he did he might lose P2 to Ocon. 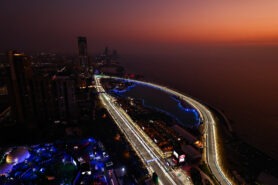 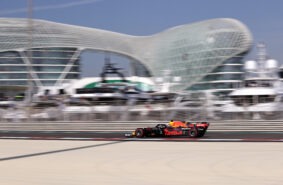