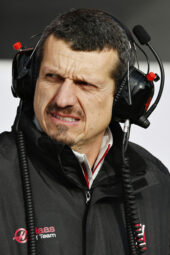 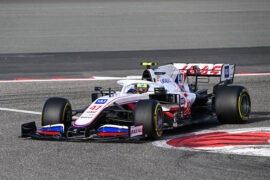 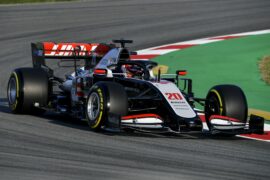 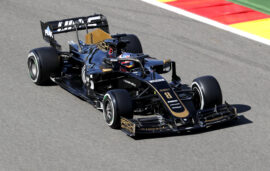 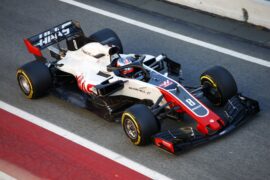 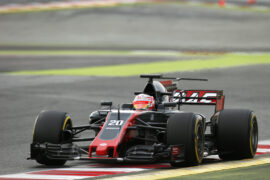 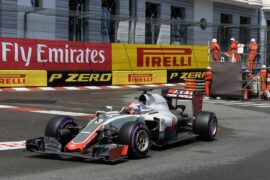 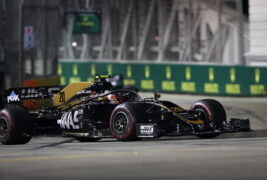 Gene Haas at the drivers announcement press conference back in 2015.

Haas started their Formula 1 adventure in 2014 and drove their first season in 2016. It's the first team from the United States since Penske back in the Seventies. The team is based in Kannapolis, North Carolina.

The team is working closely with Ferrari. A lot of technology that's being used is coming from the Maranello based company. They also use a Ferrari power unit.

The first race they ever drove in Formula 1 was a fabulous one. The frist race was the 2016 Australian F1 Grand Prix. Romain Grosjean and Esteban Gutierrez where the drivers that season. You could see by the qualifying results that they had to learn a lot about this game. Both drivers started from 19th and 20th place on the grid. 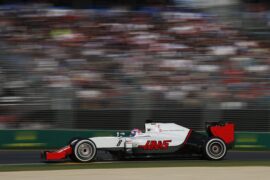 At the start Esteban had some bad luck. Fernando Alonso who was driving for McLaren-Honda collided with the back of his car. Romain Grosjean was doing very well with the car in this first race and finished 6th to score the teams first points on their debut.

The Haas team scored 29 points during their debut F1 season. Unfortunately Mexican driver Gutierrez didn't scored no points. All points where scored by Frenchmen Grosjean. He scored points in Australia, Bahrain, Spain, Austria and the US.

The team finished the season on the 8th place in the constructors championship. Which is an astonishing result when you look at the teams that finished behind them, like Renault and Sauber who have a massive history in F1. 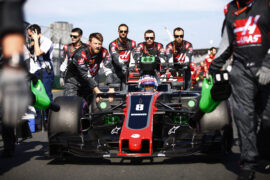 The 2017 season didn't start out as a fairy tail like the 2016 season did. Instead of a 6th place finish by Romain Grosjean, both cars had to retire the first race of the season. French driver Grosjean had to retire because of a waterleak and Danish driver Kevin Magnussen, who replaced 2016 driver Esteban Gutierrez had  a suspension failure.

The VF-17 car livery also changed during the season from dark grey to light greay. The Haas VF-17 car retired 8th times during the 2017 F1 championship. That's 1 more retirement then in the 2016 season. We also saw a lot of mooning by Grosjean. He even put his habit on his helmet during the US grand prix.

The team also could not beat their best place finish of 2016. In just the second race of the 2016 F1 champship they Grosjean finished 5th. Their best classification was 6th in Austria on the Red Bull Ring.

Overall they finished on 8 place in the 2017 F1 constructors championship, just like they did in 2016. The big difference is that they scored 18 more points. The Haas F1 team scored 29 points in their rookie season and 47 in 2017. In 2016 Haas scored five top 10 classifications and in 2017 thirteen. Especially Kevin Magnussen did a good job by scoring points in five races, Gutierrez who he replaced scored 0 points back in 2016.

Should besieged Mazepin should re-think his F1 career?

May 8 - Criticism of Nikita Mazepin's rookie season is becoming even more intense, as some wonder if the young Russian is skilled enough to race in Formula 1. The beleaguered Haas..

May 7 - Nikita Mazepin says he will use intense criticism of his enemies to his "advantage" as he continues his troubled first season in Formula 1. For a spate of controversial..

Uralkali Haas F1 Team's Official Test and Reserve Driver Pietro Fittipaldi talks us around the key corners of the Circuit de Barcelona-Catalunya ahead of this weekend's Spanish..

Apr.30 - Nikita Mazepin insists he has a "very good relationship" with his Haas race engineer - even if it sometimes doesn't sound that way on the radio. "Yes, sometimes it sounds..

Apr.28 - Gunther Steiner has played down suggestions that the Haas project may be coming to an end in Formula 1. It is said that the small American team only started the 2021..

Apr.28 - Gunther Steiner has denied that Mick Schumacher has a "huge advantage" over fellow Haas rookie Nikita Mazepin in 2021. While 22-year-old Mazepin's debut season on and off..

Apr.27 - Nikita Mazepin is expecting to spend "at least a few years" in Formula 1. The controversial Russian has had a tough introduction to the F1 world, under fire for both his..

Mazepin admits F1 is every man for himself

Apr.21 - Nikita Mazepin says the world of Formula 1 is a case of "every man for himself". The Russian rookie has taken a lot of heat for his on and off-track behaviour of late,..