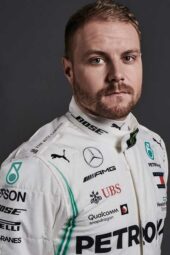 After a super 2014, Valtteri Bottas underlined his potential as as a future world champion with an impressive year in 2015.

Last season he added two more to his collection, and held off Massa to secure fifth in the championship.

Bottas is quick, clever, composed and consistent. No wonder bigger teams are interested in his services.

When the Finn arrived in 2013 he was expected to do well, but Williams struggled and provided him with an awful car.

Bottas had a dismal year but his stock remained high, thanks, in part, to his stellar junior career. 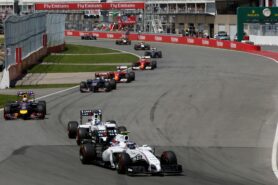 Like many of the young drivers in recent years, the 25-year-old has a strong junior CV. Two championships in Formula Renault and a GP3 world title in 2011 can’t disguise his potential.

That GP3 season caught the eye of the legendary Sir Frank Williams, and Bottas was quickly signed as the team’s reserve driver.

After one season in that role, he was promoted to race alongside Pastor Maldonado. The Venezuelan had the better of Bottas in 2013, but it was he who left the team at the end of that season.

The 2014 F1 season was a good one for Bottas. He scored 6 podium's for Williams, finished 4th in the drivers championship and defeated his highly profiled new team mate Felipe Massa, who had to make room at Ferrari. 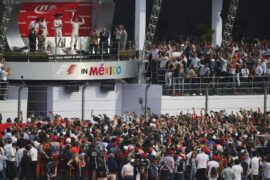 Next season the Williams still was fast compared to the competition Ferrari and Red Bull. Bottas agains scored some podiums and outrun his team mate again to finish 5th in the drivers championship. The top teams look to have interested in him. But maybe his low profile kind of character is why the top teams don't contract him.

With seats at big teams possibly opening up for 2016, Bottas is at the front of the queue. Another fine season would all but confirm his progress up the grid. The Williams is now clearly beaten by Red Bull, Ferrari and even Force India is faster this season. The Fin had an ok 2016 F1 season at Williams. He took a podium in Canada and scored 32 more points then his teammate Felipe. He outscored him for the 3rd consecutive time. 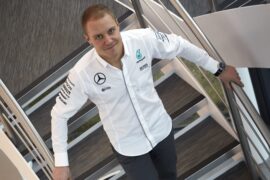 After Nico Rosberg won the 2016 F1 drivers champioship , he annouced his F1 exit a few days after he won  the last F1 race of the season for Mercedes, the Abu Dhabi Grand Prix.

His exit was a complete surprise for the Mercedes F1 team an it's said that all the F1 drivers where knocking on Mercedes their door to get the hot seat.

Names like Fernando Alonso whose adventure at McLaren was again becoming a difficult story, were named next to Pascal Wehrlein and Valtteri Bottas on the shortlist of the silver arrow team. 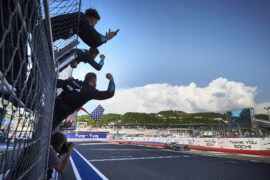 Mercedes chose Bottas, who used to be managed by team principal Toto Wolff at Williams.

It was going to be very interesting to see him perform next to 3 times World Champion Lewis Hamilton during the 2017 F1 season.

Would he be able to beat him or not, that would be interesting fact to see.

Valtteri Bottas had an interesting 2017 F1 season. He wasn't able to beat his teammate in every race, but he did score 3 victories, 4 poles and a total of 13 podiums. He got stronger as the season evolved and finished the season with a win at Abu Dhabi.

When you look at the teammate comparison tab, the first thing you will notice is that Hamilton outperformed the Finnish driver in every way in 2017. However, Bottas was adapting to Mercedes.

In 2018, he had a really difficult season at Mercedes. In the first half of the season, he was quick enough to deserve at least two victories, but bad luck played against him at China, with a Safety Car that put his lead in risk and a puncture at Baku after he was leading entering the last two laps. Bottas did not win a single race in 2018, although he was leading in Russia when he received the order to let his teammate, who was fighting for the title, pass and take the win.

For the current season, there was much speculation about Bottas' improvements and his new approach for the season. His year started well with victories at Australia and Azerbaijan and two Pole Positions in the first four races of the year. From his win at Baku onwards, he has not won a race. He scored stunning Pole Positions at Spain and Silverstone, but he could not convert those into race victories.

The last two races before the summer break were his worst of the season. He crashed out of the German Grand Prix after having a golden opportunity to take points off Hamilton's lead in the title fight, and then finished eight at Hungary after starting in the front row. An error-prone start of the race at Budapest and a touch from Charles Leclerc's Ferrari in the first lap damaged his chances in that GP. 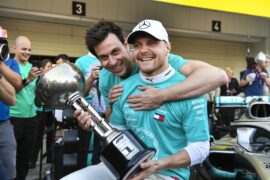 After falling 62 points behind Hamilton in the title fight and with Max Verstappen just eight points behind in the championship, Bottas' seat at Mercedes was in danger after the summer break. The team manager, Wolff, said that the decision would be made in August and that two drivers were options for the seat, Bottas and Esteban Ocon.

On the 29th of August, Bottas was confirmed for 2020 at Mercedes. In the first five races of the second half of the season, Bottas scored four podiums. In the 2019 Japanese Grand Prix, Bottas took his third win of 2019 and the sixth of his career with a solid drive after starting from third on the grid.

With his win at Suzuka and Hamilton's third place, Bottas helped Mercedes secure their sixth straight World Constructors' Championship. Also, the result determined only a Mercedes driver could win the 2019 Drivers' championship.

In the following race at the 2019 Mexican Grand Prix, Bottas crashed on his second run in Q3 and started the race in sixth. However, a solid Sunday drive helped him reach third place and keep his slim title hopes alive. In the 2019 United States Grand Prix, Bottas started from Pole Position and won his seventh F1 race after a late overtake on his teammate Hamilton, who secured the championship with a second place.

In the final two races of the year, Brazil and Abu Dhabi, he had engine problems. He retired in Brazil with an engine blowout which was prompted by an oil consumption-related issue. He had to start the last race from the last place due to grid penalties for exceeding Power Unit elements and finished fourth after he could not overtake Leclerc for third.

He finished his best year in F1 with 326 points and second place in the WDC. He won four races during the year, reached the podium 15 times (career-high), and started from Pole Position five times.

For the second-straight season, Bottas won the inaugural race of the F1 calendar. This time, he won the 2020 Austrian Grand Prix from Pole Position to reach an early lead in the World Drivers' Championship. However, Bottas won his second race of the year in the 10th round, the 2020 Russian Grand Prix, after polesitter Lewis Hamilton received two five-second penalties for doing practise starts in a forbidden place.

Bottas again could not beat Hamilton to the World Drivers' Championship in 2020, even after his great start.

In the final races of 2020, Bottas struggled with bad luck and his own performances. He ended the year second in the WDC, with two victories and five Pole Positions. 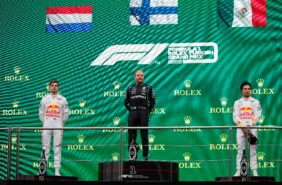 Difficult last season with Mercedes ends with P3 in the WDC

Valtteri Bottas had his final year as a Mercedes driver in 2021, before being replaced by George Russell. The Finnish racer completed a year with ups and downs, bad luck, and some bad driving on his part in third place in the WDC.

Bottas struggled with a W12 car that was unstable most of the time, but he managed to win the 2021 Turkish Grand Prix after inheriting Pole Position due to a penalty to his teammate Lewis Hamilton. That was the 10th win of his career.

On 6 September 2021, it was announced that Bottas was set to leave Mercedes and join Alfa Romeo from 2022 on a multi-year deal.

Alfa Romeo's challenger for the start of F1's new era in 2022 was a good one, and Valtteri Bottas gave it good use in the early stages of the season.

Bottas scored points in six of the first seven races of 2022 and kept the team in the Top 5 in the standings of the World Constructors' Championship. 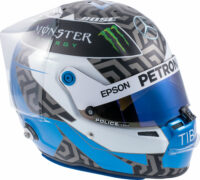 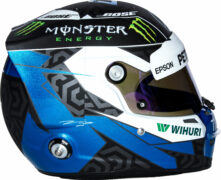 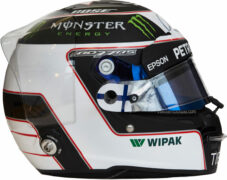 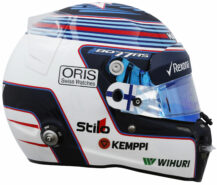 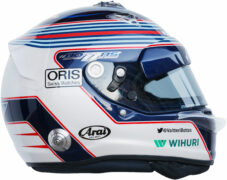 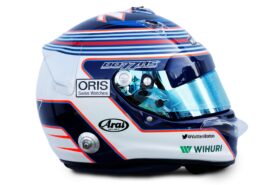 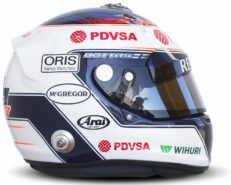 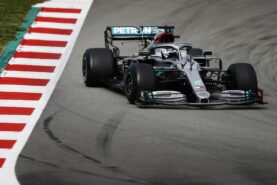 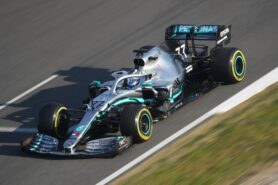 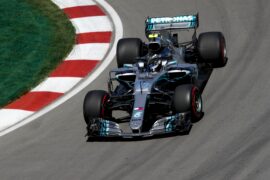 Valtteri Bottas racing the Mercedes W09 at the Canadian GP (2018) 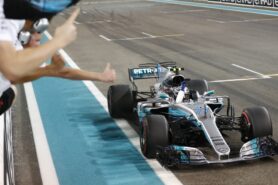 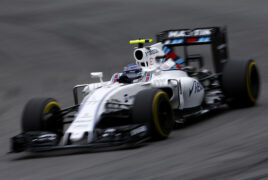 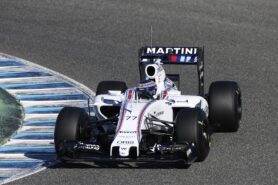 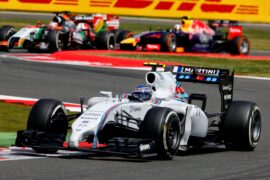 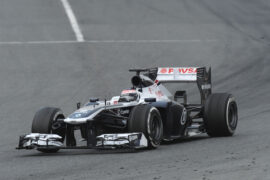 Nov.11 - Talks are taking place about tweaking the 'penalty points' system in Formula 1. Pierre Gasly has been warned by his 2023 team, Alpine, to be "careful" over the next two..

Oct.29 - Valtteri Bottas is not ruling out staying in Formula 1 long enough to benefit from Audi's decision to enter the sport from 2026. The Finn currently races for F1's..

Oct.21 - All Formula 1 champions operate in "grey areas" of the regulations, according to two-time drivers' title winner Fernando Alonso. He was speaking in the Austin paddock..

Sep.12 - Valtteri Bottas is keeping conspicuously quiet about rumbling speculation about his future as a works Audi driver in Formula 1. After serving as Lewis Hamilton's teammate..

Aug.28 - Valtteri Bottas is getting in early by putting his hand up for a works Audi race seat in 2026. The VW-owned German carmaker has finally announced that it will enter..

Jul.22 - Alfa Romeo is still looking for an opportunity to give highly-rated development driver Theo Pourchaire a run in the 2022 car. Many were surprised when it was announced..

Zhou not worried about next year's F1 seat yet

Jun.7 - Chinese rookie Guanyu Zhou says he isn't sure if he will keep his Alfa Romeo seat for 2022. In recent days, rumours have suggested the 23-year-old is among the drivers..

May 27 - There have already been 5 races in this year's Formula 1 season, and it has definitely been an exciting one! The two on top are Max Verstappen driving for Red Bull, and..

Alfa Romeo F1 Team ORLEN returned to action on practice day for the Spanish Grand Prix, the sixth round of the 2022 season. The team had a productive first session with Valtteri..

May 18 - Kimi Raikkonen's retirement only partly explains the big step forward made by Alfa Romeo in 2022. One factor may be the arrival, fresh from five years alongside Lewis..