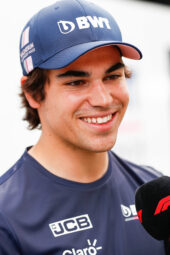 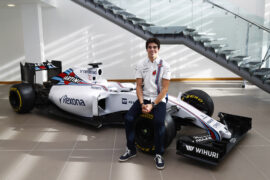 Like many race drivers, the Geneva-based Canadian Lance Stroll began his Motorsport career in karting and recorded numerous race and championship wins in his native Canada and North America.

Stroll closed out his busy 2015 season – contesting 50 races in all – making his debut in the Macau Formula 3 Grand Prix. Stroll was part of the Ferrari Driver Academy and the second youngest driver to be signed to a Formula One team. On 11 November 2015, it was announced that Stroll would leave Ferrari to serve as a test driver for Williams. 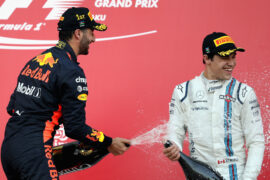 In 2016 Stroll remained with the Prema Powerteam, for a third consecutive year, to contest the Euro F3 Series for a second year. He began 2016 by finishing 5th in the Rolex 24 at Daytona in a Ford Chip Ganassi Racing entered Ford EcoBoost Prototype to become the youngest highest-placed overall finisher in the history of the event.

In the 2016 Euro F3 series, Stroll took eleven wins and claimed the title in the second race at Imola, over a hundred points clear of his main rival Maximilian Günther.

On 3 November 2016, Williams Martini Racing announced that Stroll will drive for them in 2017 Formula One season. He will become the first Canadian F1 driver since the 1997 World Champion Jacques Villeneuve, who coincidentally started his F1 career at Williams.

2017 wasn't a bad season for Williams. The team finished 4th in the constructors championship and Stroll was only 3 points behind former Ferrari driver Felipe Massa.

The 2018 season was horrible for Stroll at Williams. The Williams FW41 was the slowest car on the grid and Lance only could score 6 points and end up as 18th in the drivers' championship.

Halfway through the 2018 season the father of Lance bought the Force India shares and changed the name to Racing Point for 2019 with his son as 2nd driver next to Sergio Pérez. This is the season in which Stroll can show what he's made of. In the first 2 races of the season he outperformed his highly-rated teammate Sergio Pérez.

In the second half, Stroll could not compete against his experienced teammate. The Canadian only scored points in two of the last nine races (10th at Spa and ninth at Japan).

Stroll scored points in six of the first seven races in 2020, and in the eighth round, the 2020 Italian Grand Prix at Monza, he achieved the second podium of his career with a good third place that could have been a win if he had a good start in the second start of the GP.

In the 2020 Turkish Grand Prix, Stroll silenced his critics after achieving his first-career Pole Position in wet conditions. In the race, he led comfortably in the first part before an issue in his front wing pushed him back to ninth. 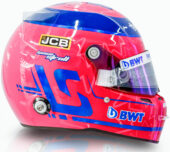 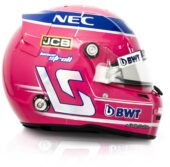 Stroll happy to silence his critics with great performance

Jan.21 - Lance Stroll says he is happy to keep responding to his critics by impressing them on the track. The Canadian's countryman Jacques Villeneuve has been a fierce and vocal..

Jan.7 - After more than 60 years away from Formula One, Aston Martin returns to Grand Prix racing in 2021. With one of the most iconic emblems in the world emblazoned above the..

Lance Stroll 2020 Beyond the Grid podcast

He’s one of the most exciting young drivers on the grid, with two podiums and one stunning pole position to his name, and yet Lance Stroll has had to deal with a minority of..

Nov.16 - Jacques Villeneuve has a rare compliment for his countryman Lance Stroll after the Turkish GP. Although Stroll finished ninth on Sunday, he actually commandingly led the..