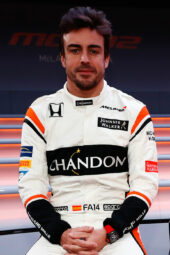 Fernando Alonso’s obsession with winning a deserved third world championship saw him return to McLaren-Honda to try and find success since 2015. However, after a switch to Renault engines, the pairing did not bond well and Alonso retired in 2018.

The Spaniard will go down as one of the sport’s all-time greats. But if he does not come back to the sport and retires without a third title, then there will be a strange sense that his career has been unfulfilled. Alonso needs, and deserves, that third world title to cement his legacy.

In a generation of some of the greatest drivers the sport has ever seen, such as Sebastian Vettel, Lewis Hamilton and Kimi Raikkonen, Alonso stands above them all.

His tenacity, determination, race craft, will to win and, obviously, his speed combined to make him the fiercest driver on the grid, and the best in the world.

Fernando Alonso driving the Minardi in 2001

Alonso got his first taste of racing as a young child when his father built a go-kart for his sister. She didn't get the hang of it, but he certainly did.

Three consecutive karting championships in the mid-1990s led him to the Nissan Euro-Open series in 1999, where he became champion.

After a year in Formula 3000, Minardi called and a 19-year-old Alonso was racing in Formula 1 in 2001. It’s difficult to impress at the sport’s slowest team, but the then-teenager shone and he earned a move to Renault in 2002, as a test driver.

Alonso signed on the premise that he would be racing properly in 2003, and he duly partnered Jarno Trulli that year. Renault had a quick car, but it wouldn't have been able to have won a race, as it did in Hungary that season, if it wasn't driven by a genius.

Alonso lapped the then five-time champion Michael Schumacher on the way to his maiden win.

The Spaniard was clearly a world champion in the making, and after two strong seasons in 2003 and 2004, he realised his dream the following year.

Schumacher’s dominance at Ferrari was over, and Alonso was at the forefront of the sport’s new era. In his Renault, he won seven races over the course of the season, while his relentless consistency saw him pick up a further eight podiums. He piped Kimi Raikkonen by 21 points.

The following year, Schumacher returned to his best form. and he and Alonso fought over the 2006 championship. The Spaniard’s brilliant start to the season, which saw him win six times in the opening nine races, set him up perfectly and, although Schumacher came close to snatching glory, Alonso clinched his second straight world title.

Renault’s stranglehold over the sport’s bigger teams was unlikely to last, and so it proved Alonso when moved to McLaren in 2007.

He was partnered by rookie Lewis Hamilton, and the pair, famously, didn't get on. Alonso felt that the team had broken promises, which guaranteed he was the number one driver and should receive preferential treatment.

As the season continued, Alonso’s behaviour became petulant. In Hungary, he blocked Hamilton from setting a meaningful lap time in qualifying. As a result, he was handed a penalty himself.

In the background, McLaren were caught with secret Ferrari documents. It is said that Alonso testified against his own team in court, which resulted in a world record $100m fine. It was safe to say, he wasn’t going to last long with the team. 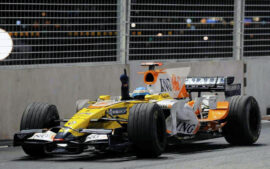 After both he and Hamilton narrowly lost out on the title to Raikkonen, Alonso moved back to Renault. However, the French outfit was a shadow of its former self.

In a car that was fighting for the lower end of the points, Alonso hit a purple patch of form. Luck appeared to help him win in Singapore, after his team-mate, Nelson Piquet. Jr, crashed into a wall.

It later came out that this was done on purpose and was organised by the team. He denied having any knowledge at all.

However, his win in Japan was genuine and brilliantly driven. To highlight his fine season, Piquet ended the year with 19 points while Alonso scored 61 points that 2008 F1 season.

It was obvious that he was waiting for the right move, but 2009 didn't present any exciting opportunities. A second year heralded with Renault brought just 26 points. It was obvious that the time had come to find a team that could give him a race-winning car.

Step in Ferrari. The Italian team had given up with Raikkonen and signed Alonso on a five-year deal. He won his first race in Bahrain and was at the forefront of one of the best title fights in years.

Further wins in Germany, Italy, Singapore and Korea put him on the brink of the world championship in Abu Dhabi. But a poor strategic call by the team lost him crucial ground that he couldn't make up. Sebastian Vettel snatched the title, but, in truth, it was gifted to him. 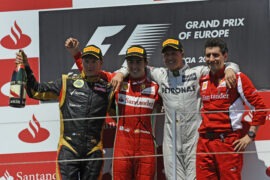 The young German then strolled to his second title in 2011, but Alonso and Ferrari put up a much better fight in 2012.

Wins in Malaysia, Valencia and Germany put him in a strong position at the half-way stage, but Ferrari couldn’t develop their car as well as Red Bull.

Vettel came back strongly and ate into Alonso’s lead by winning a string of races.

In the final race, Alonso finished second. Vettel, who crashed on the opening lap, recovered to finish sixth and won the title, just.

The staggering performance of Alonso over the course of that season won him many admirers, after his reputation took a serious hit in 2007.

But Ferrari failed to give their star driver a capable car in either 2013 or 2014. Frustration took hold of Alonso, and he decided he’d had enough. 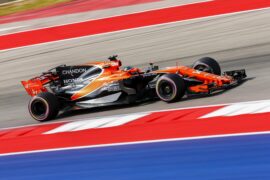 McLaren, backed by new engine supplier Honda, made their move to bring him back and “finish what we started.”

Alonso and McLaren had their backs against the wall after horrible campaigns in 2015 and 2016. But that’s just how they like it as they were hoping to prove the doubters wrong and start winning together again. The adventure with the Honda power unit was a clear disaster.

Even Ron Dennis had to clear the scene and seasons 2015, 2016 and 2017 were a nightmare. In those seasons Alonso retired 21 times, had 10 power unit failures and didn't score a single podium. His best results were three 5th place finishes.

Alonso could not cope with his frustration and sometimes was screaming on the radio about the poor engine performance. To get his head in a better mood he even took part in the Indianapolis 500 and showed the American's a taste of his racing skill by taking the lead in the race. Ironically he had to retire with an engine failure. The engine they used was from Honda.

At the end of the 2017 season the news came out that Mclaren would switch their Honda power units with the Renault power unit of Toro Rosso for the 2018 season.

In the first race of 2018 in Melbourne, Alonso finished 5th and was able to keep Red Bull driver Max Verstappen behind him for 20 laps. After he crossed the finish he was very glad he could fight again with another driver on the track and shared his relief on the radio to his team.

During the summer break of 2018 Alonso announced that he would not be racing Formula 1 in 2019. He still likes F1 racing, but his ambition is to become the best driver on the world by winning all sorts of racing formulas.

In 2019, he participated in a post-race test for McLaren at Bahrain. However, the team stated that he was not going to take part in other sessions during 2019. Alonso is currently listed as a McLaren ambassador.

Alonso made his comeback in 2021 with the newly named Alpine F1 team. This team is basically the Renault team with a new name and management. The target is to be on the podium regarly in 2021.

Ocon smiles at claims he can beat his new teammate Alonso

Jan.22 - Esteban Ocon has smiled at claims he will give F1 legend Fernando Alonso a run for his money at Alpine this year. Team test driver Sergey Sirotkin this week predicted..

Jan.20 - Esteban Ocon will give new teammate Fernando Alonso a run for his money early in 2021, according to team reserve driver Sergey Sirotkin. As Renault becomes Alpine for the..

Jan.11 - Fernando Alonso can add a third title to his tally on his return to Formula 1. That is the view of Pedro de la Rosa, a fellow Spaniard who worked with Alonso at both..

Dec.18 - Formula 1 should "analyse" why Fernando Alonso's 2005-spec Renault aroused so much positive feedback when the Spaniard demonstrated it in Abu Dhabi last weekend. Over..

Dec.17 - Assessing the talent of young drivers in Formula 1 has become increasingly difficult, according to returning two-time world champion Fernando Alonso. After two years out..

Below you can see the time sheet of the quickest lap times of each 'young' driver that was allowed to test the cars that were used during the 2020 season. Fernando Alonso showed..

Alonso eyes Renault podium for next season return to F1

Dec.15 - Fernando Alonso is targeting the podium for his full-time return to Formula 1 next year. The Spaniard, who demonstrated his title-winning 2005 car in Abu Dhabi, is..

Dec.14 - Formula 1 is hoping for a 2021 season that is "as normal as possible". That is the claim of Bruno Famin, the FIA's operations director who this year has been in charge of..

Dec.11 - Esteban Ocon insists he is "not afraid" of Fernando Alonso. This year, as he returned to F1 following a year on the bench, 24-year-old Ocon struggled to match up against..

Sainz thinks there is no logic behind young drivers test

Dec.11 - There is "no logic" to the FIA's decision to allow some experienced drivers to test after the Abu Dhabi finale but not others. That is the view of both Carlos Sainz and..