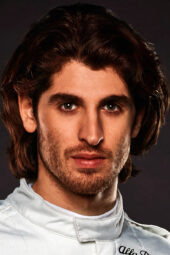 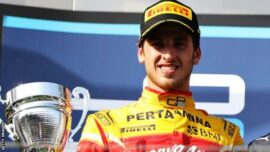 Giovinazzi during his days in the GP2 Series

Giovinazzi started his racing career in 2006 and he quickly found success, winning three karting championships in 2006 —the Italian National Trophy 60cc, the 36th Torneo Industrie - Minikart, and the Euro  Trophy 60—. Then he won the WSK Master Series - KF2 championship in 2010 and 2011, a title won by Max Verstappen in the following season.

His single-seater career took off with his solid participation in the Formula Pilota China, where he won the title convincingly in his first season in 2012 after winning 6 of the 18 races in the calendar, including a streak of four victories in a row at the Sepang International Circuit in November of 2012. Also, he had a small tenure in the 2012 Formula Abarth, where he had successful results —two wins and another podium— as a guest driver.

His promising career proceeded with participation in the 2013 British Formula 3 Championship, the FIA Formula 3 European Championship and the Masters of Formula 3 race at Zandvoort, all with the Double R team. The Italian's highlight of the 2013 season was his second-place finish in the British F3 Championship, where he lost the title at the hands of Jordan King.

He won the 2015 Masters of Formula 3 race at Zandvoort ahead of George Russell and Sergio Sette Camara, becoming the first Italian to win the event and the only one so far. He had brief stints in the DTM with Audi, participated in the 2015 Macau Grand Prix and finished fourth.

In the following season, he participated in two races of the Asia Le Mans Series, winning them both. 2016 delivered him another second place, this time in the GP2 Series with Prema Racing, with his teammate Pierre Gasly beating him by eight points to win the title, despite the Italian winning five races compared to the Frenchman four. Then, he drove in one race the European Le Mans Series and two races of the FIA World Endurance Championship, earning one podium for Extreme Speed Motorsports in the LMP2 Ligier JS P2.

Formula One entered his life in 2017 when Ferrari announced him as their third driver for the 2017 season on the 19th of December of 2016. Then, he drove the Sauber C36 as a substitute of Pascal Wehrlein in the Australian and Chinese Grands Prix, as the German driver was not fit to drive after a crash in the 2017 Race of Champions. The Italian, who participated in the 2017 winter testing, did not impress in the first two races of his F1 career with a 12th place at Melbourne and heavy crashes in Saturday's Q1 at Shanghai and during the Grand Prix showed he did not enjoy a great start for his F1 tenure.

After his brief participation with Sauber, he landed a role as Haas F1 Team third driver. He participated during FP1 in 13 Grands Prix weekend throughout 2017 and 2018, seven with Haas in 2017 and six with Alfa Romeo Sauber in 2018. On the 25th of September of 2018, he was announced as Kimi Raikkonen's teammate at Alfa Romeo for the 2019 season. 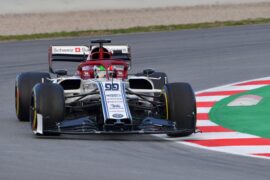 The 2019 campaign started with real difficulties for the Italian, as he could not match Raikkonen's speed and consistency during race days, where he finished ahead once out of the first 12 races and was out-scored 31-1 in terms of points and out-qualified 8-4 on Saturdays before the summer break.

He scored his first Formula 1 World Championship point in the Austrian Grand Prix at the Red Bull Ring on the 30th of June of 2019.

The Italian scored points in his home GP at Monza with a ninth place. Then, he even led the race in Singapore —during for four laps— and defended the position with good moves from the main cars of the grid. Eventually, he finished 10th, scoring points for the second straight race for the first time in his career.

On the 4th of November of 2019, the rumours of Nico Hulkenberg taking Gio's seat at Alfa Romeo for 2020 were shut down. The team confirmed the Ferrari-related Italian for 2020.

Midway through the season, Giovinazzi started to compete better against his experienced teammate during qualifying and races. In the second half, Giovinazzi scored points three times with solid drives at his home at Monza, at Singapore and with a great fifth place in Sao Paulo.

While he finished inside the points three times in the second half, Raikkonen did it only once, which would be a good message for the Italian thinking about 2020.

Giovinazzi ended up in 17th place in the WDC with fourteen place in what was his first full year in the pinnacle of motorsport. 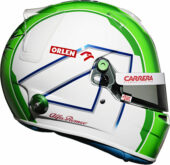 Giovinazzi was gutted to hear his Ferrari chance was lost

Jan.20 - Antonio Giovinazzi has admitted he didn't take news of Carlos Sainz's Ferrari seat for 2021 "all that well". The 27-year-old has been retained by Alfa Romeo and remains a..

A rally driving lesson, a hairdo, a hotdog... Our boys put in their Santa suit for the

Giovinazzi says Raikkonen still one of the best drivers in F1

Nov.24 - Kimi Raikkonen remains one of the very best drivers in Formula 1. That is the claim of the 2007 world champion's Alfa Romeo teammate, Antonio Giovinazzi, who like..

Binotto: No room in F1 for entire Ferrari rookie trio

Oct.31 - Only one of the trio of top Ferrari 'academy' rookies will make it into Formula 1 next year. Earlier, it was believed that Mick Schumacher might replace Antonio..

Oct.30 - Alfa Romeo Racing ORLEN will extend the relationship with Kimi Räikkönen  and Antonio Giovinazzi to a third season as the driver pairing is confirmed for the team for..

Oct.13 - All the signs are pointing towards a Mick Schumacher-Kimi Raikkonen lineup at Alfa Romeo for 2021. That is the view of Dr Helmut Marko, a top Red Bull official who is in..

Yes or No Challenge with Kimi, Antonio & Robert

In this Yes or No challenge Kimi, Antonio & Robert are asked: Do you always smile in pictures? Have you ever taken bottles of shampoo or conditioner from a hotel? Have you..

How well do Raikkonen & Giovinazzi know each other?

Raikkonen & Giovinazzi play: You or me?

Come on boys, we said eyes