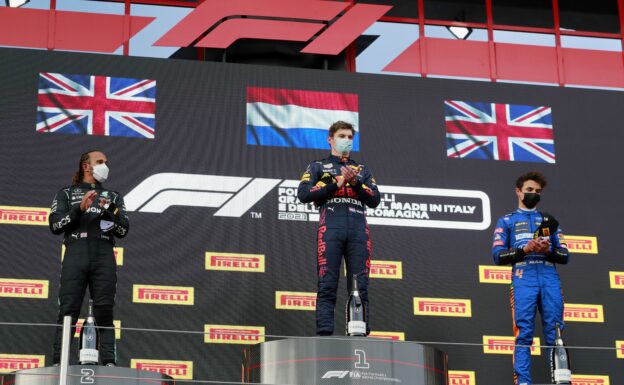 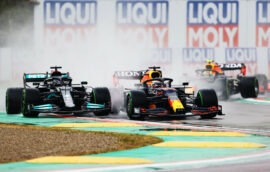 Lewis Hamilton and Max Verstappen  compete for position on track during the F1 Grand Prix of Emilia Romagna at Autodromo Enzo e Dino Ferrari on April 18, 2021 in Imola, Italy.

Max Verstappen won his 11th F1 race at the 2021 Emilia Romagna F1 GP today. He started from P3 and won a very eventful race at Imola circuit for the first time. It was the 65th victory for the Red Bull Racing team.

Verstappen had a great start in the Red Bull on the wet Imola circuit and passed his team mate Sergio Perez and the Mercedes of Lewis Hamilton in the run towards the first corner. Verstappen and Hamilton battled for P1 going into turn 1. Hamilton didn't want to give up and the British driver ended up on the high curbs and damaged his front wing.

A few moments later Nicholas Latifi spun off with the Williams in turn 12. He was able to go on but didn't see Nikita Mazepin in the Haas coming back on the track and eliminated himself when both cars collided. A hard crash into the wall was the result. The safety car deployed for a couple of laps to recover the Williams of Latifi. Mazepin was able to go on undamaged.

When the race restarted behind the safety car, Max Verstappen was able to pull a gap to Hamilton of 5 seconds.

Mick Schumacher had harsh moment when he spun the Haas behind the safety car and lost his front wing when he hit the wall at the end of the pitlane. The German driver had to drive 2 laps without his front wing because the pitlane was closed due to his own debris that was blocking the pitlane exit.

After 20 laps the rain had completely stopped and the track was drying out. But nobody dared to switch to slicks just yet. Sebastian Vettel was the first to switch to medium slicks with the Aston Martin in lap 22. He struggled for grip on his first lap and lost his 16th position to Pierre Gasly in the AlphaTauri.

In lap 27 Hamilton had closed the gap to only 1.5s and more drivers switched to slicks. Verstappen switched to medium compound tyres first. Hamilton pitted one lap later. He tried to overtake Verstappen by putting a fast lap. He did have purple sectors, but came out of the pit with a bigger gap than before the pit stops, due to a slight delay during the pitstop. 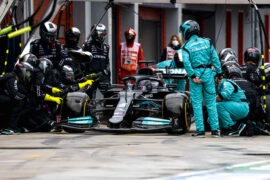 Lewis Hamilton pits stop in the Mercedes W12 in Imola (2021)

A few laps later Hamilton damaged his front wing lapping George Russell's Williams. He turned in on a wet piece of tarmac and under-steered off the track and almost got stuck in the gravel pit. The Brit kept the momentum going but was not able to avoid a small collision with the barrier en broke the right part of his front wing. The Mercedes driver was smart enough to drive completely backwards through the gravel onto the track and limped back to the pits for a new nose.

At the same moment Valtteri Bottas in the Mercedes and Russell in the Williams had a high speed crash at 320 km/h on the main-straight. Both drivers stepped out their wrecked cars unharmed. A red flag was the result. All cars had to return to the pits while the track got cleared.

After 20 minutes of recovery time the race was restarted with still 34 laps to go. All lapped cars were allowed to unlap them self. After all unlapped cars were back into the pits the drivers followed the safety car out of the pits for the restart. Kimi Raikkonen had a tough moment when he spun off in the Alfa Romeo behind the safety car. The Finn was lucky to go on undamaged, but lost P8 to Hamilton. 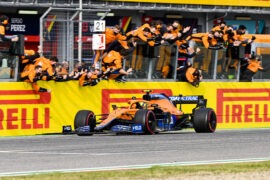 In front Verstappen did almost the same, but was very lucky to recover in time before Ferrari driver Charles Leclerc  passed him. The Dutchman kept the lead. At the restart McLaren driver Lando Norris passed Leclerc for P2.

Hamilton was on a charge and drove from P9 to P5 with 20 laps to go. Perez who started on P2 had a terrible race this afternoon. He went off a couple of times and lost a lot of places. The Mexican got stuck behind both Alpine's and didn't even score any points.

Hamilton made strong recovery and even made it all the way back to P2. Norris was able to score his second podium for McLaren. Both Ferrari drivers also had a strong race. Carlos Sainz who started on P11 even finished as 5th.

After the race was finished some drivers received a penalty. Lance Stroll dropped one place with the Aston Martin to P8 and Kimi Raikkonen dropped to P13. He drove a great race until he spun behind the safety car. The Finn lost his first 2 points of the season due to a 30 sec. time penalty. The penalty was applied because the Alfa Romeo team didn't instruct him the right way when he came back on the track. This made him drop from P9 to P13. 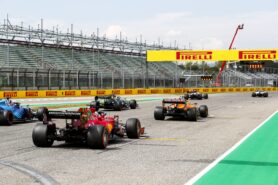 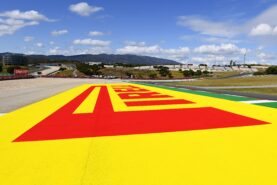