The schedules below are showing all race classifications of the grand prix held in 2015. The 2015 F1 standings show total domination of the Mercedes team. Lewis Hamilton and Nco Rosberg together won 16 of the 19 races.

Because of this domination the constructors championship shows a massif gap of 275 points  between Mercedes and runner up Ferrari.

It was also the first season of the revived McLaren-Honda team. The team had a horrific season and only scored a total of 27 points. In 2014 McLaren scored 181 points.

With Sebastian Vettel now partnering Kimi Raikkonen at Ferrari and McLaren trying to get back to top form with the returns of Honda and Fernando Alonso, Mercedes was expected to have it harder to dominate as they did in the first year of the Turbo-Hybrid Era.

However, the German team showed the same kind of power demonstrated in 2014, again with Lewis Hamilton dominating the World Drivers’ Championship ahead of Nico Rosberg. Mercedes won 16 races out of the 19 scheduled for 2015, matching their 2014 record, but this time, the other three races went to a resurgent Ferrari, instead of Red Bull, and the four-time champion Vettel.

Among the rest of the field, Russian Daniil Kvyat was now Daniel Ricciardo’s teammate at Red Bull, while Toro Rosso had an exciting new lineup with debutants Max Verstappen (the youngest ever to race in F1 at 17 years and 166 days) and Spanish Carlos Sainz Jr.

In the first half of the year, Hamilton had more consistency both mechanically and in qualifying than 2014, which ultimately helped him dominate.

In the first round, Hamilton led a comfortable 1-2 for Mercedes at Australia. Vettel put Ferrari back in the podium in the first race of 2015, before taking advantage of the heat at Malaysia to beat Hamilton to victory and take his first triumph for the Maranello-based team and the first for Ferrari since the 2013 Spanish Grand Prix.

At this point, the McLaren-Honda merger was already a disappointment, not only due to the car being uncompetitive, but also due to horrible reliability.

Hamilton then won at China in front of Rosberg and in Bahrain ahead of Raikkonen, who achieved his first podium since the 2013 Korean Grand Prix and his first since returning to Ferrari in 2014.

Rosberg stopped Hamilton’s run of Pole Positions at Spain and took the victory. Then, at Monaco, Hamilton started from Pole and was dominating the race before losing it due to an ill-advised pitstop behind a Safety Car caused by a collision between Verstappen and Lotus’ Romain Grosjean.

Rosberg won for the third straight year at Monaco and Vettel finished second, ahead of Hamilton. Jenson Button’s eighth place for McLaren-Honda meant the first points for the team in the 2015 season.

Hamilton won the next race in Canada, while Rosberg won comfortably at Austria. In those two races, Williams achieved podiums with Valtteri Bottas at Canada and Felipe Massa in Austria.

A thrilling start to the 2015 British Grand Prix meant a fight between Williams and Mercedes for the race lead. Massa led the first part of the race before a perfect undercut by third-placed Hamilton gave the lead to the British champion. Ultimately, rain also played a part in the race and Hamilton won in front of Rosberg and Vettel, who had a great performance in the wet and good timing to pit for wet tyres.

A crazy race in Hungary saw Vettel dominate and take his second win of the year in a race in which Hamilton finished sixth and Rosberg eighth. It was the first race of the Turbo-Hybrid Era in which Mercedes did not take a podium place. Also, Red Bull’s Kvyat achieved his first F1 podium and Ricciardo finished third in what were the team’s first appearances in the podium in 2015.

Hamilton had a 21-point lead over Rosberg at the end of the first half and Vettel was 21 points behind Rosberg.

The second half of the year was completely taken over by Hamilton, starting with two straight Poles at Belgium and Italy to tie the second-largest streak of Poles in history, with seven. He won those two races, despite a tyre-pressure issue was investigated after his Monza win before the win was upheld.

Vettel dominated the Singapore Grand Prix from Pole as Hamilton retired from the GP, moving closer to Rosberg for P2 in the WDC.

After his DNF at Singapore, Hamilton won at Suzuka and Sochi. In Japan, Hamilton tied his hero Ayrton Senna in terms of race wins, with 41, at a track in which the Brazilian sealed his three F1 titles in 1988, 1990 and 1991.

At Russia, polesitter Rosberg suffered an issue with his throttle pedal that meant his second DNF due to mechanical trouble in the year. Vettel finished second at Sochi and overtook Rosberg in the championship.

The running in the 2015 US Grand Prix was limited due to heavy rain at Austin, and qualifying took place under wet conditions on Sunday. Rosberg started from Pole, but Hamilton took the lead after an aggressive overtake into the first corner of the first lap.

Hamilton entered the weekend with a chance to secure his third World Drivers’ Championship, as he needed to outscore Vettel by nine points and Rosberg by two.

The race was eventful and a wet start was great for Red Bull, as their two drivers were able to challenge Hamilton for the lead in the early stages. As the track dried, the Red Bull’s lost their way, while Vettel was recovering from P13 on the grid.

Rosberg was leading the race heading into the final laps, but on lap 48 he made a mistake and Hamilton got through. Vettel had overtaken Verstappen for P3, but was unable to pass Rosberg for P2.

Hamilton took his 43rd Grand Prix win and secured his third Formula 1 World Championship, matching Senna’s tally, which he described as “the greatest moment” of his life and "a very humbling experience".

The Englishman had secured the championship with three races to spare, which was the first time he had won a title before the final race of the season.

In the remaining three races and with the two championships decided, the major fight was between Vettel and Rosberg for P2 in the WDC. Rosberg won the three races from Pole Position in a trio of Mercedes 1-2 to seal a 1-2 for the German team in the World Drivers’ Championship.

Vettel finished third for Ferrari in his first season, exactly as his idol, Michael Schumacher, had done in 1996, and with three wins too.

Raikkonen finished fourth in the championship, while the two Williams’ drivers managed to beat the Red Bull pair. Mercedes, Ferrari and Williams led the Constructors’ table, while McLaren finished a lowly ninth.

Hamilton had shown Senna-Esque speed in his early years, and in 2015 he matched the legendary Brazilian’s tally of titles in route to joining F1’s group of most successful drivers. 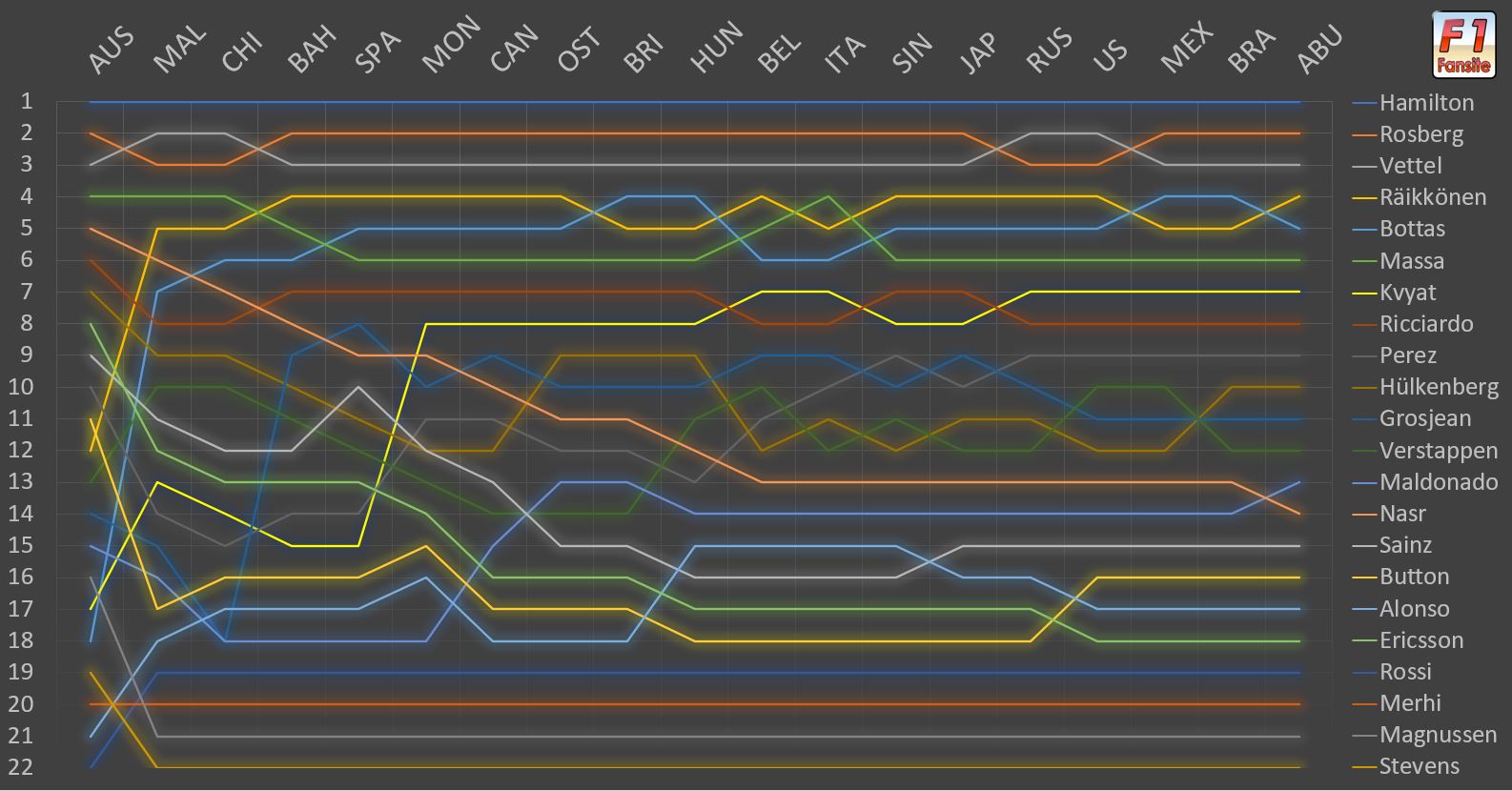