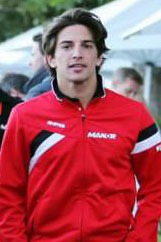 Roberto Mehri may be here today, gone tomorrow so he is under immediate pressure to perform.

The Spaniard joined Manor on a short-term deal, and has another contract to compete in Formula Renault 3.5.

He won the Formula 3 Euro Series in 2011, while he came third in Formula Renault 3.5 last season.

Mehri has looked off the pace so far, and he may be out of the team sooner rather than later.