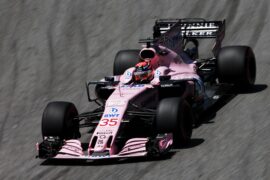 Following a successful start to his career in karting, George Russel stepped in to single seater racing in 2014, winning the BRDC Formula 4 Championship at his first attempt as well as becoming the McLaren Autosport BRDC Award winner.

George progressed to the Formula 3 European Championship for two seasons, and then went onto win the GP3 championship in his rookie 2017 season with two races to spare. He stepped up to the FIA Formula 2 Championship this year, which he is currently leading, whilst also fulfilling a Test and Reserve Driver role for Mercedes-AMG Petronas Motorsport.

Russel's first drive in a Formula 1 car was for Force India back in 2017. He was allowed to drive the VJM10 of Sergio Pérez around the Interlagos circuit during FP1 of the 2017 Brazilian Grand Prix. He drove the 12th quickest lap time of the session. He was almost 6 tents of a second slower than Esteban Ocon in his first F1 experience. 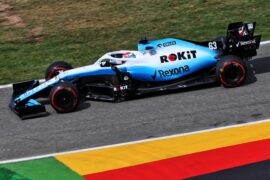 In 2018, he dominated the FIA Formula 2 championship and won the title ahead of Lando Norris and Alexander Albon after winning seven races with ART.

On the 12th of October of 2018, he was given a seat with Williams-Mercedes for 2019 to drive alongside Robert Kubica.

In 2019, he performed well during the first half of the season and dominated his teammate in every aspect, except on points, as Kubica scored a point in the German Grand Prix and Russell finished 11th, which was his best result of the year at that point. Russell dominated the Polish driver comfortably in qualifying and race position in the first 12 races.

After his good performance, many expected him to be in contention for a Mercedes seat in 2020, however, Mercedes' boss, Toto Wolff, indicated that only two drivers were in consideration, Valtteri Bottas and Esteban Ocon.

Russell was not able to score points during the second part of 2019, but he continued his dominance over Kubica both on Saturdays and Sundays. His best results of the year were 11th at Germany and 12th at Brazil, but he definitely showed hoy capable and consistent he can be on race weekends.

In his quest to achieve his first points in Formula 1, Russell had some great performances in qualifying, putting his Williams in Q2 several times and always beating his teammate. However, his best chance for points came in the 2020 Emilia Romagna Grand Prix and he crashed behind the Safety Car.

Jan.22 - Max Verstappen is already better than seven time world champion Lewis Hamilton. That is the sensational claim of Christian Horner, the Red Bull team boss who thinks the..

Jan.19 - Lewis Hamilton's plan to boost his financial and influential power at Mercedes has been "shattered". That is the view of former F1 driver Christijan Albers, as seven time..

Russell says it felt strange to return back to Williams

Jan.18 - George Russell says it felt "strange" when he was unable to keep racing for Mercedes in Lewis Hamilton's place after his near-win in Bahrain. The 22-year-old Mercedes..

Jan.15 - Mercedes is not commenting on reports about the status of Lewis Hamilton's reportedly difficult negotiations over a new contract. Some believe the parties are arguing..

'Tis the season! As we approach Christmas, Williams Racing drivers George Russell and Nicholas Latifi decided to get in the festive spirit by getting each other some

2020 has been a year which no one around the world will ever forget. Williams reflect on a season like no

Dec.17 - Times are changing in F1, with an old guard of drivers clinging to their seats at major F1 teams by the skin of their teeth, as young talent flows into the sport. There..

Dec.16 - George Russell wants to pull Williams off the very bottom of the constructors' world championship next year. The team, whose founder Sir Frank Williams is currently in..

Hamilton says car felt not the same after Russell raced it

Dec.12 - Lewis Hamilton, who has now recovered from covid-19, says his Mercedes car felt different after George Russell substituted for him last weekend in Bahrain. The seven time..