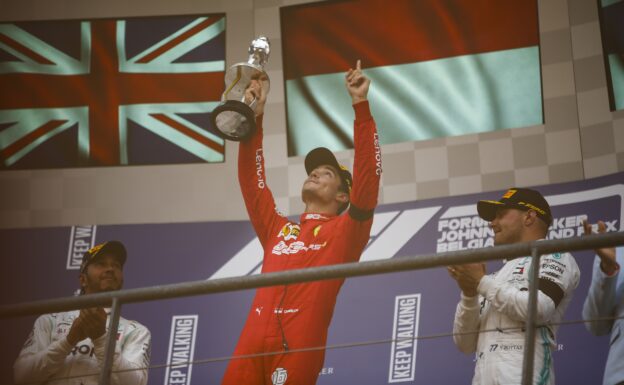 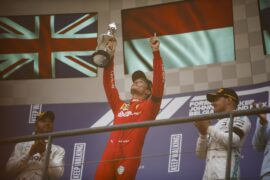 Charles Leclerc won his maiden Formula 1 Grand Prix today in Belgium. He scored race win number 236 for Scuderia Ferrari. It also was the first race win of the 2019 F1 season for Ferrari.

Calros Sainz had a bad start and stalled on the grid. In the first corner it was very tight between Kimi Raikkonen and Max Verstappen that ended up in tears for Verstappen at Au Rouge when his damaged left front suspension broke down and he crashed into the barrier.

In turn 1 Hamilton in the Mercedes passed the Ferrari of Vettel for P2. Vettel was awake and took back P2 from Hamilton on Kemmel straight, when the Safety car was deployed to clean up the debris on the track. Carlos Sainz's McLaren broke down in lap 3 and caused the safety car period to extend. until the end of lap 4.

Lando Norris had very good start from P11 and ended up on P5 after turn 1 in the McLaren.

After the restart behind the safety car Leclerc pulled away from Vettel and Hamilton had to defend his P3 at the end of Kemmel straight against Bottas. 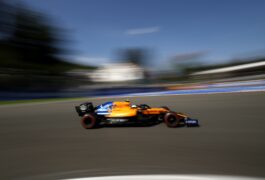 In lap 10 Sergio Perez in the Racing Point overtook the Haas of Kevin Magnussen for P7 on Kemmel straight. Hamilton was keeping the Ferrari of Sebastian Vettel in his sight and was able to stay in 1 second with the Mercedes. One lap later Magnussen was also passed by Pierre Gasly's Toro Rosso for P8. Lance Stroll was the next driver to pass the Haas of Magnussen in the next lap.

Nico Hulkenberg was the first to do a pitstop with the Renault RS19. He drove into the pits in lap 12 to switch from soft to medium tyres. Stroll was the second driver to switch from soft to medium. He did made his pitstop with the Racing Point in lap 15. One lap later Vettel did his pitstop to defend an undercut of Hamilton. The pitstop was done in 2.5 sec. Hamilton pushed as much as he could, but Vettel was pushing hard on his new tyres and set the fastest lap of the race with a 1:47.087.

Mean while great battles evolved when Kimi Raikkonen, Sergio Perez and Pierre Gasly were fighting for P13 and Raikkonen was passed by Perez and Gasly on Kemmel straight from 2 sides.

In lap 19 all Formula 1 fans gave Anthoine Hubert a huge standing ovation. Hubert passed away yesterday after a horrific crash in the Formula 2 race on Spa. His race number was #19.

Leclerc did his pitstop for medium tyres in lap 22 and came back to the circuit behind his team mate Vettel. The gap between both drivers was 4.7 sec. at that moment. Hamilton also did his pitstop in lap 22. The pit crew didn't do a great job because it took them 3.6 sec. More than 1 second slower than Vettel's. He came back on the track 7.3 sec. behind Leclerc on P3.

The next lap (23) it was time for Valtteri Bottas to do his pit stop that took 2.3 sec. to return to the race on P4. 6 sec. behind Hamilton. 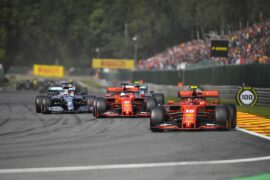 Leclerc was pushing hard to close the gap with Vettel and to retain P1. In lap 24 he only was 2.2 sec. behind the SF90 of Vettel. Hamilton also was giving it all he had and even improved the quickest lap of the race. But Leclerc was very determinant to overtake Vettel. In lap 27 Vettel was given the order to let by  the Monegasque for the lead. On the start-finish straight Vettel followed up the team order.

With 15 laps to go Hamilton was right on the tail of Vettel and got into the 1 sec. DRS-zone. The Ferrari of Vettel was very quick on the straights and Hamilton had a hard time to pass the German driver. At the end of lap 31 they were very close and had a great battle for P2. At the end of Kemmel straight Hamilton passed Vettel in lap 32 with a great move.

Bottas also was gaining on Vettel and in lap 34 Ferrari decided to do an extra pit stop to give Vettel an new set of soft tyres.

In the midfield we also saw a lot of overtaking. Alexander Albon who drove his first race in the Red Bull Racing RB15 started from P18 and overtook a lot of drivers to drive on P7 in lap 38.

With 4 laps to go Hamilton had closed down the gap to race leader Leclerc back to 4 seconds and was pushing with all he got. In the last lap both were only 1.5 sec. apart while Giovinazzi crashed his Alfa Romeo in Pouhon. On  the finish line they were only 0.9 sec. apart. 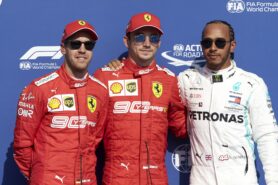 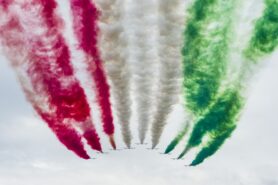