Robert Kubica was reserver driver with no. 88 at Alfa Romeo

Robert Kubica is the only Polish driver in F1 history. On our Polish F1 Drivers & Statistics Overview you can check that out for each driver.

After a successful career in karting, winning multiple karting titles in Poland, the International Italian Junior Karting Championship twice, the Monaco Kart Cup twice and solid performances in the World Championship, he made the move to Junior Formulas.

His junior formula career started under the wings of Renault. From 2001 to 2005, Kubica competed in many championships. In the Formula Renault 2000, he lost the title in 2002 against Argentinian José María López, after winning four out of 10 races. He competed in the 2003 Formula 3 Euro Series and won one race and faced many drivers who eventually made it into F1: Nico Rosberg, Markus Winkelhock, Christian Klien, Timo Glock, Robert Doornbos, and Lucas di Grassi.

He had different tenures in the British Formula 3 Championship and had another season in the Formula 3 Euro Series with less success. He competed in three editions of the Macau Grand Prix between 2003 and 2005, achieving one Pole Position and the second place in 2005. Also, he drove in the Masters of Formula 3 race in 2003.

He won the Formula Renault 3.5 Series title in 2005 after dominating the season with four wins and 11 podiums in 17 races. In the 1st of December of 2005, he participated in his first F1 test with the Renault F1 team and drove Fernando Alonso's 2005 championship-winning car in Barcelona.

In 2006 he was named BMW Sauber test driver and he made his debut at the Hungarian Grand Prix after the team declared Jacques Villeneuve unfit to race. The Polish impressed in his first race, but his 7th place did not count as he was disqualified. In only his third race, he finished on the podium behind Michael Schumacher and Kimi Raikkonen at Monza.

He kept his place at BMW Sauber for 2007 alongside Nick Heidfeld. After scoring points in three of the first five races, he had one of the heaviest crashes in Formula 1 history in Canada. Luckily for him, he escaped without any major injuries and only missed the following race, the US Grand Prix at Indianapolis. A young Sebastian Vettel took Kubica's place for the race in the USA. Kubica recovered and scored points in eight of the final ten races of 2007 and finished sixth in the championship.

In 2008 he had his best year and mounted a title challenge against the Ferraris of Raikkonen and Felipe Massa and the McLaren of Lewis Hamilton. He returned to the location of his terrible crash in 2007 and took advantage of an eventful race to take his first and so far only win in F1, which gave him a brief lead in the WDC.

His championship hopes disappeared after the Chinese Grand Prix, with only one race to go. Ultimately, he finished in fourth place in the standings. In 2009 he had a tough year and scored only one podium, a second place in the 2009 Brazilian Grand Prix. On the 7th of October, Kubica completed his racing circle as he was announced as a Renault driver for 2010.

The 2010 campaign was good by the Polish driver, scoring three podiums and finishing eight times in the top 5, which was great compared to his teammate's —Vitaly Petrov—  zero podiums and only one top 5 finish. For the 2011 season, he was set to continue racing with the Renault squad, but a horrific crash on the 6th of February of 2011 during the Ronde di Andora rally injured him badly and he wasn't fit to drive in the 2011 season.

He underwent multiple surgeries by many doctors and recovered, even though he sustained a major injury on his right arm. He kept his seat at Renault despite his inability to drive, but he missed the 2012 season too, a year he was supposed to drive with Ferrari alongside Alonso, according to Kubica himself.

His motorsport activities resumed on the 9th of September of 2012 in the Ronde Gomitolo Di Lana. He participated in the European Rally Championship, the WRC-2 and WRC between 2013 and 2016, winning the WRC-2 title in 2013 but without big success in the WRC. 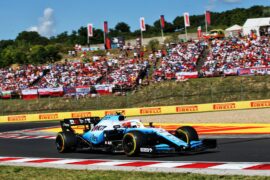 After several tests with Williams, he became a clear contender for a seat for the 2018 season, but on the 16th of January of 2018, he was confirmed as Williams reserve driver. He participated in three FP1 sessions and finished in last place twice, and he was faster than Lance Stroll in the 2018 Spanish GP FP1 session.

On the 22nd of November of 2018, Williams confirmed Kubica was going to be part of their new drivers' lineup for 2019. His teammate would be George Russell, the reigning F2 champion.

The 12 races before the summer break were really difficult for Kubica, as he was being constantly out-qualified by his rookie teammate and falling behind in races. The Williams FW42 was clearly the worst car of the grid in the first half of 2019. However, despite his struggles, Kubica finished ahead of Russell and scored a point in the 2019 German Grand Prix, which was his first point-scoring finish since the 2010 Abu Dhabi Grand Prix.

After the summer break, the struggle continued for Williams. On the 19th of September, during the Pre-race Press Conference of the 2019 Singapore Grand Prix, Kubica announced his departure from Williams at the end of the year. He was not clear about his next move, but said that he wanted to stay in F1, although "not at any cost".

He left the sport after the last race of the year at Abu Dhabi. His teammate finished with a 21-0 advantage during qualifying but the Polish race-winner finished ahead in the standing thanks to the point he scored at Hockenheim.

In 2020 Kubica moved from Williams to Alfa Romeo and took his long term sponsor Orlen with him to be their official reserver driver. He only did some practice sessions in the Alfa during this first covid affected season.

A rally driving lesson, a hairdo, a hotdog... Our boys put in their Santa suit for the

Dec.22 - Robert Kubica and his sponsor have confirmed that they are staying put at Alfa Romeo in 2021. Team boss Frederic Vasseur broke the news last week, revealing that reserve..

Nov.28 - Robert Kubica says he is no longer on the Formula 1 grid "because people think I'm not fast". The 35-year-old Pole pulled off a sensational return to the sport with..

Kubica not sure he will remain F1 reserve

Nov.26 - Robert Kubica says he is yet to decide if he will remain Alfa Romeo's official F1 reserve driver in 2021. The Pole combined the role with a full-time seat in the German..

Kubica may return to world rallying in 2021

Nov.18 - Robert Kubica could return full-time to the world rally championship in 2021, according to Poland's Przeglad Sportowy newspaper. Mere days ago, the Pole revealed that he..

Nov.17 - Robert Kubica is set to make two more Friday practice appearances this season at the wheel of Alfa Romeo's 2020 car. The Pole, who is the Swiss based team's reserve..

Nov.15 - Robert Kubica has revealed that he turned down an offer to make a guest appearance in a forthcoming round of the world rally championship. The Pole, who turned to..

Nov.1 - Robert Kubica says he will "definitely" not be returning to Formula 1 as a race driver in 2021. The Pole is at Imola this weekend in his capacity as Alfa Romeo's reserve..

Oct.20 - Robert Kubica says he is not sure what his next move in the motor racing world will be. The Pole made a sensational return to Formula 1 after eight years of serious..