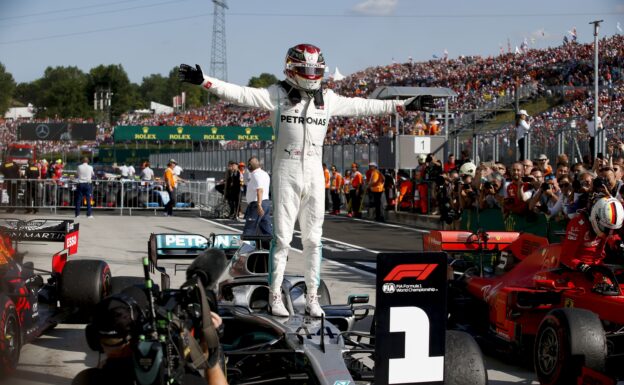 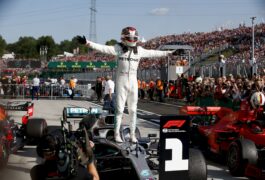 Lewis Hamilton scored his 81st F1 victory and the 97th win for Mercedes today. It was the 8th race win of the season for Hamilton.

The start of the 34th Hungarian Formula 1 Grand Prix was under perfect weather conditions. Max Verstappen who was on pole position for the first time in his F1 career with the Red Bull. Wen the lights went out all cars got away perfectly. Max Verstappen defended the inside line against both Mercedes cars with more horsepower. Max Verstappen, Valtteri Bottas and Lewis Hamilton drove side by side into turn 1 and came very close. Verstappen was able to pull away, while Bottas and Hamilton battled for 2nd, were Hamilton came out as 2nd coming out of turn 3. Bottas had damaged his front wing slightly but was able to go on.

Bottas also lost places to both Ferrari drivers Charles Leclerc and Sebastian Vettel and was 5th at the beginning after turn 1 of lap 2. Daniel Ricciardo was the only driver who started on the slowest and most durable hard tyres. He had to start from the back due to using more than 3 additional power unit elements.

In lap 6 Bottas decided to come in for a new front wing, because his wing end plate was broken on the right-side of his front wing. He returned to the track as dead last 49 seconds behind race leader Verstappen. 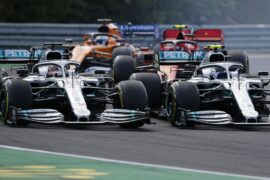 Verstappen had a gap of 2 seconds to Hamilton after 10 laps and seemed to have everything under control. Hamilton was pushing hard to try and catch Verstappen and drove the quickest lap time so far in lap 11.

In lap 18 Hamilton was pushing hard to get closer to Verstappen and the gap was getting smaller to 1.7 sec. Both Toro Rosso drivers Daniil Kvyat and Alexander Albon had a great fight and drove side by side several corners and kept it clean.

Sergio Pérez was the first to do a pitstop on the medium tyres. He switched to the hard tyre to try and make it to the end. Hamilton had closed the gap to Verstappen at that moment to 1.3 sec. Verstappen was telling his team on the radio that the rear grip was getting less. Bottas who had to fight the Mercedes through the field to score some decent point was driving on P14 at that moment and trying to get passed Daniel Ricciardo in the Renault.

In lap 23 the Mercedes crew did a dummy pitstop to try and fool Red Bull Racing with their pitstop. The backmarkers also had some influence in the gap between Verstappen and Hamilton. Verstappen said on the radio his rear tyres are losing grip. But Red Bull Racing didn't pit yet. 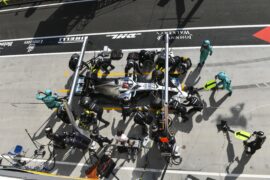 Hamilton again was pushing very hard to get closer to Verstappen after 5 laps. He already was behind Verstappen in lap 35 to try and pass the Dutch driver on the main straight with DRS in turn 1 of lap 36, but wasn't successful.

In lap 38 Hamilton was very close to Verstappen and both had a great fight for the lead. From turn 1 to 4 Hamilton tried to pass Verstappen several times and they even drove side by side in turn 2 and 4, but Hamilton couldn't pass the 21 year old Dutchman and gone wide in turn 4. Hamilton had to regroup and was looking at a gap of 2 seconds now and had to cool down his engine and brakes before he could have another try.

In lap 48 Mercedes did a surprisingly strategy move when Hamilton pitted for the 2nd time to get new Medium tyres to try and pass Verstappen at the end of the race. The British drivers returned to the track as second with a gap to Verstappen of 21 seconds. Red Bull Racing didn't react with a pitstop and stayed out. Hamilton came on the radio and told his team his had doubts about the plan. Hamilton did try to close the massive gap to Verstappen's tail.

Haas driver Romain Grosjean retired his car in lap 52 with a water leak.It was the 6th retirement of the 2019 season for the French driver. 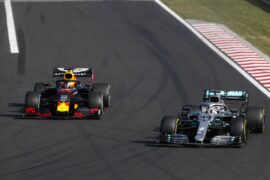 At the end of the start/finish straight of the beginning of lap 67 Hamilton overtook the Red Bull and drove away. Red Bull even did a pitstop because Verstappen's tyres were gone. He could safely do a pitstop, because he had a huge gap to Leclerc who was on P3 at that moment and was passed by his teammate Sebastian Vettel at the end of the straight also.

Verstappen did score an extra point by driving the quickest lap time on his new soft tyres in the penultimate lap. 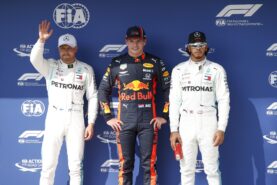 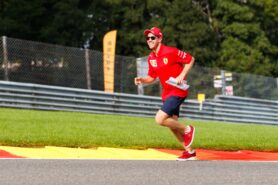