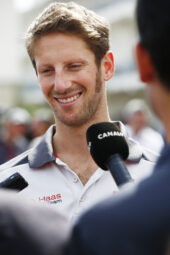 Naturally talented and blisteringly fast, Romain Grosjean is one of the most exciting drivers in modern Formula 1.

With his teething problems now, hopefully, behind him, 2015 should be the year where the 29-year-old becomes one of the best drivers on the grid, and proves his critics that Lotus made the right decision to keep their faith.

However, now it is he who has taken the gamble as he joins new-boys Haas F1. It could be an inspired decision or one he will regret for the rest of his career.

The Frenchman’s reckless driving earned him a one-race ban in 2012, and he has been branded as clueless by many of his peers. But just as his last chance was fading away, Grosjean showed how quick he is at the back end of 2013.

Even his, then, team-mate, Kimi Raikkonen, couldn't live with his pace.

Grosjean typical of the modern day young driver in Formula 1, having being groomed through all the junior formula’s in preparation.

Championships and success has followed him through his junior career as he lifted the French Formula Renault, Formula Three Euro series and Auto GP championships.

Grosjean was given his chance in F1 by Renault in 2009, after the controversial events following Nelson Piquet Jr's race fixing.

He had an unspectacular introduction to the sport and failed to earn a single point in seven races, while being substantially slower than team-mate Fernando Alonso and the causer of a several high profile crashes.

It was clear that his talent still needed honing, and Grosjean spent another two seasons in GP2 where he became champion in 2011.

Most GP2 champions make the leap straight into F1 and Grosjean was no exception when Lotus announced him as their second driver for 2012, alongside Raikkonen.

Grosjean was clearly a new man, as he qualified third for the opening race in Australia. In a frustrating start to the season he would be regularly seen towards the front of the grid in qualifying, but a series of first lap incidents always hampered his races and cost him points.

His highlight was at the championship’s fourth round, in Bahrain, when he picked up his first podium with an impressive third behind Raikkonen, before he came second in Canada.

From there his season unravelled as a series of car problems, qualifying spins and crashes cost him massively and earned him an unwanted reputation on the gird.

After he caused a first lap crash in Belgium, which could have seriously injured either one of Lewis Hamilton, Fernando Alonso or Sergio Pérez. The FIA banned Grosjean from the Italian GP.

In 2013, Lotus retained him, but a difficult start to the season looked like ending his F1 career. However, a podium in the Korean GP started a fine run of form which saw him score four podiums in the final six races.

2014 was a forgettable year for the team as they produced an awful car, but Grosjean still impressed in comparison to his new team-mate, Pastor Maldonado.

In 2016 Grosjean moved to the new all American team called Haas. In the debut race of the brand new team Grosjean scored 6th. He started from 19th and moved up 13 places during the Australian Grand Prix. The rest of the season we saw and heard a lot of frustration.

The 2017 F1 season was difficult for Grosjean again. This time, his teammate was Kevin Magnussen. The Haas VF-17 proved to be difficult in Grosjean's hands as the car from the previous campaign. The Frenchman finished the year with 28 points and ended up in the 13th place in the WDC, outscoring his teammate 28 to 19. 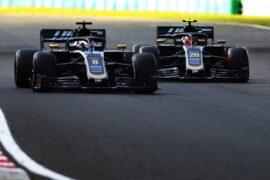 Magnussen stepped up in 2018 and outscored Grosjean 56 to 37, as the Haas VF-18 was a good car for the midfield. His best result was 4th at Austria, after not scoring points in the first eight races of 2018 and having disastrous performances, especially at Azerbaijan where he crashed behind the Safety Car and at Spain, where he caused a collision between multiple cars after he spun and kept his foot on the throttle and returned to the track into the path of various cars. He helped Haas to finish 5th in the 2018 Constructors' Championship, their best result so far.

Haas kept the same driver lineup for 2019 and it has not been a great year, with their drivers colliding during race day on multiple times. Grosjean retired from six of the first 12 races and scored points only three times during that span, with 7th at the German Grand Prix as his best result of the first half.

Rumors of a possible change of drivers at Haas enhanced when the team director, Guenther Steiner, said that the teammate of Kevin Magnussen for 2020 was between Grosjean, Esteban Ocon and Nico Hulkenberg. As Renault announced Ocon's signing for 2020, the seat was narrowed down to just Grosjean and Hulkenberg.

Many people thought Grosjean's time in F1 was not going to continue. Hulkenberg was expected to be elected for the seat, but on 19th September Haas announced Grosjean was keeping his place for 2020.

The second half of the year finished without any points and it meant Grosjean matched his lowest amount of points (eight in 2014) in a full F1 season (he participated in seven races in 2009 and did not score points). He finished the year in 18th place, which is his worst in a full season so far.

2020 was difficult for all Ferrari-powered cars, and Haas struggled. Grosjean scored points 2020 Eifel Grand Prix with a solid ninth place, but the year was still too hard on Haas and their drivers.

On October 22nd, the team announced both of their drivers, Grosjean and Kevin Magnussen, would be leaving the team after 2020.

Grosjean admits his F1 career is now over

Jan.22 - Romain Grosjean says his Formula 1 career is "over". "From a driving point of view, I think it's over," revealed the Frenchman, who has now shed the bandages that hid the..

Jan.15 - Daniel Ricciardo has indicated he is more likely to try his hand at Le Mans as opposed to the equally-fabled Indy 500. The Australian has moved from Renault to McLaren..

Dec.22 - The designer of the Bahrain Grand Prix venue has defended the circuit's safety measures in light of Romain Grosjean's fiery recent crash. Most observers agree that the..

Dec.15 - Romain Grosjean is set to undergo surgery in the wake of his horror and fiery crash in Bahrain. The Frenchman missed the final two grands prix of his Formula 1 career as..

Dec.12 - Haas will not be giving Romain Grosjean a Formula 1 test over the winter. After it emerged that the Frenchman could not race in Abu Dhabi due to his burns, he said he..

Dec.11 - Two former teammates have farewelled Romain Grosjean from Formula 1 by saying the Frenchman was impressively fast over a single lap. Grosjean, who has revealed a photo on..

Dec.7 - Romain Grosjean says skipping the final race in his Formula 1 career this weekend will safeguard his longer-term health. The Frenchman, who watched Sunday's Sakhir GP from..

Guenther Steiner chats to Will Buxton on Pietro Fittipaldi, as he stands in for the injured Romain Grosjean at the Sakhir Grand

Dec.5 - Romain Grosjean still isn't sure if he will be able to round out his Formula 1 career next weekend in Abu Dhabi - and therefore has a 'plan B' up his sleeve. Although..

Dec.5 - Romain Grosjean says he is "not against" Formula 1 deciding to show all the replays of his horror crash of last Sunday. Daniel Ricciardo led the criticism of the way..

Dec.3 - Romain Grosjean has all but admitted he was to blame for his fiery crash in Bahrain last Sunday. "It went too fast but I didn't know I had touched Kvyat," the Frenchman,..