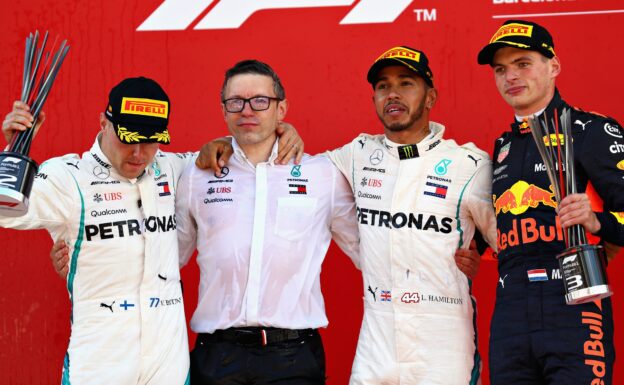 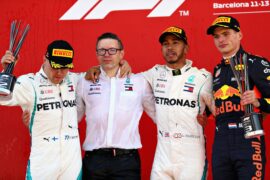 The 2018 Spanish Grand Prix started with a big crash in turn 3. After the start Romain Grosjean had to do an avoiding move in the Haas, because hiis team mate Kevin Magnussen lost his rear in turn 3. Grosjean spun and slammed the gas, which caused a cloud of smoke and zero visibility. Nico Hulkenberg in the Renault and Pierre Gasly in the Toro Rosso could not avoid a collision and retired with severe collision damage.

After 5 laps behind the safety car the race resumed. In lap 18 Sebastian Vettel pitted and switched to medium (white) tyres. One lap later Bottas did the same and came close to 2nd place.

in lap 24 Kimi Raikkonen had turbo problem on his Ferrari SF71H. He drove slow on the track, but was able to recover get to the pit and retired.

In lap 41 Esteban Ocon retired with an engine problem and caused a virtual safety car period. During the VSC Vettel pitted and lost his P2 to comeback on the track as 4th. Max Verstappen lost the wing-end plate on the left front wing when he hit Sergey Sirotkin at the end of the VSC period.

Stoffel Vandoorne also had to retire his McLaren with a gearbox problem on the start/finish straight in lap 47.

After a bad start in the 2018 F1 season Max Verstappen also had a strong performance again and scored his 13th podium. 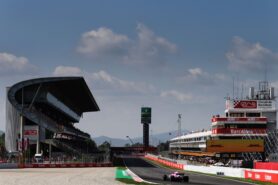 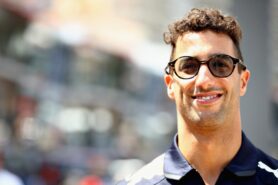