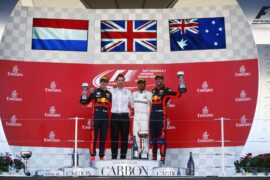 The 2017 F1 season started out with a nice fight between Mercedes and Ferrari. The Mercedes has been dominating F1 since 2014 and last 2016 F1 season they dominated completely.

Ferrari could stand up to Mercedes until Singapore. At the start of that race both Ferrari's collided and the 2 races after that they suffered from technical failures.

The schedules below show the current 2017 F1 standings according all race classifications of each gp event for all drivers and teams.

In the sidebar on the right you can navigate to other seasons. You can go all the way back to 1950 F1 results. The year that F1 started.

Hamilton ties Vettel with a masterclass

The 2016 season was already behind when the Formula 1 circus arrived in Australia for the first round of 2017. Ferrari seemed competitive enough to fight Mercedes in the first year of a new aerodynamic era with bigger, more ‘menacing’ cars and wider tyres that looked awesome.

The technical regulations were aimed to improve and further enhance cornering speeds, the bigger tyres were a good way to find more mechanical grip in order to boost cornering performance.

In terms of drivers and team changes, Nico Rosberg, the 2016 World Champion, retired from the sport days after achieving his childhood dream. Valtteri Bottas moved from Williams to Mercedes to replace the champion. Felipe Massa, who was retiring at the end of 2016, came back to partner the 2016 European F3 champion, Lance Stroll at Williams.

Manor Racing MRT closed down in March after its parent company, Just Racing, was in administration since January.

Also, Carlos Sainz moving from Toro Rosso to Renault from the USA race onwards was a notable change. Toro Rosso announced that they would be equipped with Honda engines for 2018, while McLaren would run Renault Power Units from 2018 in a blockbuster deal.

A red-hot start for Vettel and Ferrari

At Melbourne, Mercedes looked favorite to take the first victory of the season, but Ferrari was a clear menace for the race. Lewis Hamilton got Pole Position on Saturday, but it was Sebastian Vettel who would triumph on Sunday with tremendous pace and always putting pressure on Hamilton in the first stint, which proved to be crucial. Vettel extended his first stint longer than Hamilton’s and emerged from the pits in the lead to win comfortably.

Bottas achieved his first podium for Mercedes in the first race. Hamilton, on his side, clapped back at Shanghai with a dominant display. Vettel and Red Bull’s Max Verstappen (in his first full season with the team) completed the podium of a wet-to-dry race in which the three podium-finishers were the stars.

Ferrari again emerged victorious in Bahrain, with Vettel beating the two Mercedes, who had locked the front row in qualifying, with Bottas achieving his first-ever Pole Position. Hamilton finished second, behind the German racer.

The Ferrari seemed the best car on race trim, but they shocked Mercedes at Sochi with a 1-2 in qualifying. Hamilton struggled during that weekend, but Bottas managed to take the lead from Vettel at the start, slipstreaming the Ferraris. Bottas managed to beat Vettel in Russia for his first-ever Grand Prix win and maintain Mercedes’ perfect record at the Sochi circuit.

The fifth round took place in Spain, with the Barcelona track functioning like a traditional place for upgrades. The top three teams, Ferrari, Mercedes and Red Bull, all had some upgrades, with Red Bull hoping to get closer to the top two.

On qualifying, Hamilton edged Vettel for first place, with Bottas third and Raikkonen fourth. Less than three-tenths covered the top four, with the Red Bulls far back.

Vettel got off to a better start than Hamilton and led the first part of the race. A Virtual Safety Car helped Hamilton to close the gap to Vettel, until the Englishman was able to overtake the Ferrari in the main straight on lap 44. Ultimately, Hamilton won the race, but Mercedes’s upgrades were not as great as expected, as Ferrari again looked as strong if not stronger than the Silver Arrows. Daniel Ricciardo finished third with his first podium of the year.

Force India achieved their best result of the year in Spain, with Sergio Pérez leading a 4-5 for the team, with Ocon behind.

At Monaco, Ferrari was again the car to beat and their drivers locked the front row, though Kimi Raikkonen was on Pole Position for the first time since the 2008 French Grand Prix. Hamilton struggled and could not get pas tQ2 due to a crash from McLaren’s Stoffel Vandoorne. Raikkonen led the first part of the race, but an overcut by Vettel was effective to give the team a solid 1-2 and in the order they would have liked, with Vettel winning and increasing his championship lead.

It was Ferrari’s first 1-2 since the 2010 German Grand Prix, and Raikkonen’s face showed that, to some degree, it was a controversial race too. Ricciardo finished third again, while Hamilton’s seventh-place gave Vettel a 25-point gap in the WDC and Ferrari was first in the Constructors’ standings too, 17 points ahead of Mercedes.

Mercedes and Hamilton start to climb back

Hamilton won in a tremendous race in Canada with a commanding pace in a Mercedes 1-2, the first of the year for the German team, after tying Ayrton Senna’s career tally of 65 Pole Positions. Then, Hamilton started from Pole Position at the first-ever Azerbaijan Grand Prix, which was a controversial race. Vettel followed Hamilton through several Safety Car periods as the race was very eventful. In one of those periods, Vettel hit the back of the Mercedes while preparing for a restart. The German thought Hamilton had break-tested him and got alongside the British champion and turned in to hit his W08 in retaliation.

Eventually, Vettel was given a 10-second stop-go penalty, but Hamilton still finished behind him, as his headrest had come loose while leading the race. Ricciardo won ahead of Bottas and Stroll, who achieved the first podium of his career in what was only his second point-scoring outing.

In the next race, Hamilton had to endure a five-place penalty for an unscheduled gearbox change, but he could rely on Bottas to take Pole and win the race in front of a charging Vettel.
Still, Vettel had a solid 20-point gap over the Mercedes driver after nine races.

Hamilton then dominated the British Grand Prix in front of his home crowd. Ferrari had a dismal race at Silverstone after suffering punctures in both cars late in the race. Vettel finished seventh, which brought Hamilton just one point behind.

It was Hamilton’s fifth win in the British Grand Prix, tying the record, held by Jim Clark and Alain Prost.

Ferrari finishes the first half in style at Hungary

Again, Hamilton had trouble controlling the temperatures of his tyres in qualifying and qualified just fourth, while Ferrari locked the front row again in a twisty circuit. In the race, Vettel overcame an issue in his steering wheel to lead Ferrari’s 1-2 in a race in which Hamilton was third due to Bottas letting him through, but the Englishman allowed his teammate to pass in the final corner, as he had previously arranged with the team. Also in the race, Verstappen had taken out his teammate Ricciardo at the start of the race.

Mercedes hits back in the power-driven circuits

Down by 14 points after 11 races, Hamilton returned from the holiday break with tremendous speed, taking Pole at Spa-Francorchamps and holding a charging Vettel during the race in a Ferrari SF70H that was not distant from the Mercedes in the power-demanding straights of the glorious Spa circuit. With his Pole Position at Spa, Hamilton tied Michael Schumacher at the top of the all-time standings with 68 P1s on Saturdays.

At Spa, Mercedes was not dominant as expected, as Bottas could only finish fifth after being overtaken by the Ferrari of Raikkonen and the Red Bull of Ricciardo purely on power on a Safety Car restart.

At Monza, Hamilton qualified on Pole in an extremely wet qualifying session, breaking the all-record for Pole Positions with his 69th. Hamilton had our qualified P2 Verstappen on Saturday by more than a second, but due to grid penalties, it was Stroll who lined up alongside the Mercedes on Sunday. Ferrari had a dismal qualifying, with their cars only seventh and eighth.

On Sunday, Hamilton led a Mercedes 1-2 to take the championship lead off of Vettel, who finished third.

Hamilton continues to outperform the grid

Ferrari was expected to dominate at the downforce-driven Singapore race. Mercedes had the third-best car for F1’s Night Race, with Hamilton only fifth in qualifying. Vettel started on Pole Position, with Verstappen second. This time, it was the first time F1 saw rain in Singapore, which would only make the race more interesting.

At the start, Verstappen and the fourth-placed Raikkonen got off to better start than Vettel, but then as the German extremely closed his line to cover Verstappen and Raikkonen tried to overtake the Red Bull on the inside, the three collided, resulting in immediate retirement for Raikkonen and Verstappen. Vettel survived the first corner, but then spun after the second corner and retired with an already damaged car. Hamilton had a good start from P5 and took the outside line into the first corner, avoiding the crash and reaching second place before Vettel’s spin.

Now in the lead, Hamilton controlled the pace in front of the faster Red Bull of Ricciardo and took the 60th victory of his F1 career.

Ferrari’s nightmare continued in Malaysia. The red car was again the best of the field, but it was unreliable. Raikkonen was unable to start the race from P2, while Vettel started from last place due to mechanical issues as well.

Verstappen won in Malaysia with Hamilton second and Vettel fourth in a Red Bull 1-3.

Ferrari’s struggles carried on to Japan, where Hamilton won with Vettel retiring due to a spark plug issue. Hamilton had his first chance to seal the championship in Austin, where he won, but Vettel’s second-place prevented him from sealing his fourth championship. Verstappen had crossed the line in third in the USA, but he overtook Raikkonen with all his tyres out of the track and received a controversial five-second penalty after the race.

Mercedes secured their fourth Constructors’ championship in a row.

Verstappen won in Mexico the following week as polesitter Vettel crashed into Hamilton at the start. Eventually, Hamilton finished ninth, but Vettel being unable to finish P2 sealed the World Championship in favor of Hamilton, who retook the title after losing in 2016.

Hamilton became the fifth driver in history to reach at least four World Championships, joining Juan Manuel Fangio, Alain Prost, Michael Schumacher and Vettel, who he had beaten to tie his tally of titles.

The last two races, at Brazil and Abu Dhabi, went to Vettel and Bottas, respectively. Vettel finished second in the championship after winning only once in the second half of the year, while Bottas finished third with three wins.

A tremendous fight between Mercedes and Ferrari finished with Hamilton returning back to the top and further increasing his legacy as one of the greatest drivers ever.

A new era gave us a renewed sense of competition between top teams and showed us a tremendous level of excellence from the victors and those competing at the front.