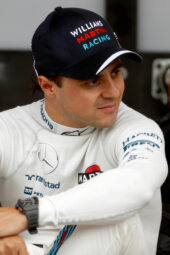 Felipe Massa’s career has been given a much needed boost after he successfully moved to Williams in 2014, bringing an end to an eight year relationship with Ferrari.

The Brazilian has been reborn and in 2015 he almost beat his outstanding team-mate Valtteri Bottas.

Towards the end of the season he matched Bottas for speed, and he will hope to beat him this season.

As he is one of the most popular drivers in Formula 1, fans will be relieved to see a revitalised Massa after his career threatened to fizzle out at Ferrari.

The relationship the Italian team had built up with the popular Brazilian went beyond arguably any driver/team relationship in modern times. They had been through so much together, it was an emotional farewell.

Had Lewis Hamilton not overtaken Timo Glock to win the championship on the last corner of the 2008 season, robbing Massa in the process, or if Massa hadn't have almost lost his life in a horrific incident, after which he has never quite been the same, we be discussing on of the greatest drivers of his generation.

At his very best Massa could take on the best and beat the best.  In 2008, he humiliated his world championship team-mate Kimi Raikkonen and in the process almost had the better of Lewis Hamilton, a driver who critics were arguing could be as successful as Michael Schumacher.

The Brazilian, born in Sao Paolo, was so successful in his youth that a Formula 1 drive came early in his career, with Sauber in 2002. It was a learning curve for Felipe as several mistakes cost him points and he finished with just four in the championship.

After a year out in 2003 in which he spent time with Ferrari, he returned to Sauber again in 2004 and had clearly matured. 12 points followed that season, and in 2005 he consistently outpaced 1997 world champion Jacques Villeneuve. The big teams took notice.

A surprise move to Ferrari in 2006 got the critics talking but Massa responded well. At the centre of a title battle between Fernando Alonso and team-mate Michael Schumacher, Massa learnt the role of playing second fiddle to the German.

He took his first pole and subsequently his race win in a dominant weekend in Turkey, and followed that up by becoming the first Brazilian since Ayrton Senna to win the Brazilian Grands Prix. He finished the season in third on 80 points.

2007 was a further improvement as three race wins in Bahrain, Spain and Turkey catapulted him into a title fight.

However, a poor second-half of the season saw him drip off and he was eventually forced to aid his new team-mate Kimi Raikkonen, who went on to win the title.

Then came his titanic title fight with Hamilton where fate dealt him the cruellest of hands, not only did he lose by a single point but it happened on the last corner of the season.

After Jenson Button and Brawn GP put Ferrari into the shades in the 2009 campaign, Massa was still on top form.

But a 180 mph crash, after a spring that came loose from a car in front collided with his helmet, ended his season and almost his life.

On his return he was put firmly in the shadows by the majestic Fernando Alonso. Four difficult seasons followed and although Massa didn’t perform badly, he couldn't match the dizzy heights of the Spaniard

Fortunately, Williams spotted a savvy move and signed Massa on a three-year deal. A new team and new environment have revitalised Felipe, who has rediscovered his mojo.

Williams returned to form in 2014 and, although Massa was outperformed by the excellent Bottas, a strong season culminated in two podium finishes, while a pole position in Austria was one of the highlights of the season.

2015 was even better. Two more podiums followed and he pushed Bottas hard. The popular Brazilian is back at his best and finished on a solid 6th place in the championship. 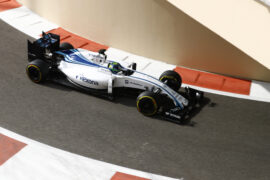 Felipe had a tough last season in 2016. He finished 11th in the championship and couldn't keep up with his teammate Valtteri Bottas. He could not get on to the podium and couldn't classify higher then 5th. He had a very emotional home grand prix.

After he crashed out of the race due to aquaplaning, he waved to the grandstands wearing the Brazilian flag when he walked back while crying to the pit. When he arrived in the pit-lane all F1 teams he walked passed where giving him a big applause. His wife and boy went to pick him up and hugged him in pit lane.

Everybody thought his F1 career ended in 2016. But because of the surprising exit of Rosberg at Mercedes, he was asked to fill-up the seat of Valtteri Bottas, who moved to Mercedes. With the millions of his fathers teammate Lance Stroll, Williams looks to have a great future.

Apr.27 - George Russell is a "super driver" who "deserves a chance" to race for the works Mercedes team. That is the view of former Ferrari driver Felipe Massa, who gave an..

Massa: Alonso may not succeed in F1 comeback

Nov.23 - Fernando Alonso's return to Formula 1 could be as unsuccessful as that of his former championship rival and F1 legend Michael Schumacher. That is the warning of former F1..

Nov.20 - Felipe Massa hopes it is true that his former Ferrari teammate Michael Schumacher is able to follow the likely F1 debut of his son Mick next year. Their former team boss..

Nov.20 - Former Ferrari driver Felipe Massa has backed Sebastian Vettel's Ferrari split. The Maranello team decided to replace the German with Carlos Sainz for 2021 and beyond,..

Nov.9 - Max Verstappen only needs a car capable of going two tenths faster in order to race to a world championship. That is the view of Felipe Massa, who as a Ferrari driver in..

Sep.18 - Ferrari may have made the best choice to oust Sebastian Vettel, according to the team's former driver Felipe Massa. Brazilian Massa, whose Ferrari teammates included..

Felipe Massa says he is not going to divulge the "information" he knows about the health of his former Ferrari teammate Michael Schumacher. Ever since his late 2013 skiing crash,..

Formula E is fast becoming the obvious 'plan B' for Formula 1 drivers. That is the view of Felipe Massa, the former 11-time grand prix winner for Ferrari who now drives in the..

As a driver Felipe Massa experienced every emotion under the sun: The joy of winning races for Ferrari; the utter despair of losing a world title at the final race of the year;..