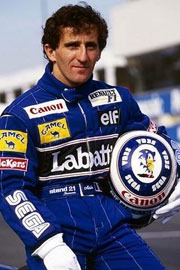 The Professor, Alain Prost, may not have had the terrific pace of his arch-rival Ayrton Senna, or the relentless consistency of Michael Schumacher, or even the brilliance of Juan Manuel Fangio, but, alongside those three legends, he forms the four greatest drivers to have ever raced in Formula One.

Prost was smooth, clever and fast. The Frenchman held the majority of records, before they were surpassed by Schumacher. An incredible 51 wins and four world championships make him a genius.

Prost changed Formula One in the way he thought. He used his mind to win. He was smarter and more intelligent than any other driver on the grid. His nickname, ‘The Professor’, pays testament to that.

Along with his sharp mind, Prost will be remembered for his rivalry with Senna. The two greatest drivers of their era fought bitterly over world championships during the late 80’s. The levels of petulance have seldom been seen but neither has the drama and brilliance that they created. They spurred each other on. Prost wouldn’t be as great as he was without Senna. The same can be said of the Brazilian hero.

Senna wasn’t the only world class driver that Prost fought against and conquered. The 1980’s may have been F1’s finest era. True greats such as Nelson Piquet, Nigel Mansell and Niki Lauda also raced. They all won titles but none matched the four won by Prost. He was a hero, a gentlemen and a pioneer.

Born in the town of Saint-Chamond, near the city of Saint-Etienne, Prost was a late arrival into Motorsport. Whereas many professional drivers start go-karting at a young age, Prost didn’t catch the bug until he was 14. However, his talent was polished quickly. After several karting championships he joined French Formula Renault, where he won the championship in 1976. After more success in Formula Renault Europe and Formula Three, the 24 year-old joined F1 in 1980 with McLaren.

It was an erratic first season with highs and lows. Points on his debut in Buenos Aires and subsequent points in Interlagos, Brands Hatch and Zandvoort were matched with several heavy accidents, one which resulted in a broken wrist. Prost terminated his three-year contract with the team after just one season and joined Renault, citing the problems with the car and the team's negative attitude towards him for his departure. 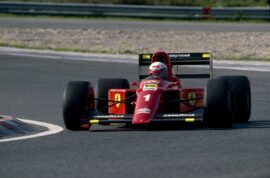 After another topsy-turvy start to the season, Prost claimed his first-ever win at his home race, the French Grand Prix in Dijon. That focused his mind and from there he didn’t look back. Two more wins followed in Zandvoort and Monza, while he also took two pole positions. A 5th place in the world championship was a fine result and he finished only seven points behind the champion Nelson Piquet.

Two more wins followed in 1982 and four more in 1983. He was getting closer to a world championship and finished just two points behind Piquet. However, his relationship with Renault deteriorated as they blamed him for not winning the championship and he blamed them for not developing the car sufficiently. A move back to McLaren for 1984 was sealed. 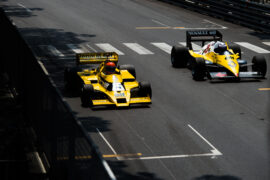 McLaren had built a monstrous car for 1984 and Prost and his new team-mate, double world champion Niki Lauda, dominated the season. Prost won seven more races to Lauda’s five but he lost out on the championship by an even smaller margin than the year before. Lauda became a three-time champion by half a point. Prost would have won the championship had the Monaco Grand Prix ran for the full distance. Horrendous rain in the principality forced an abandoned race halfway through; therefore the points awarded were half of what they would have normally been.

However, the now 29-year-old got his revenge the following season. After so many near-misses Prost stormed to the 1985 title, winning by 20 points. After Lauder retired, Prost was left to defend his title against the Williams pair of Piquet and Mansell. In a titanic battle, Mansell entered the final race set to become the champion. All he had to do was finish third in Australia but a spectacular rear-tyre failure handed the title to Prost.

McLaren couldn’t maintain their dominance in 1987 and Williams stormed to the title. Prost still fought hard and his win at the Portugal Grand Prix was his 28th career win, surpassing the previous record set by Sir Jackie Stewart. Prost’s hold of that record would last until 2001. 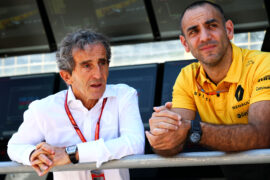 In 1988 McLaren signed with Honda after the engine manufacturers decided to dump Williams after they failed to hire a Japanese driver. Honda, who was the best around, was fond of Ayrton Senna. Prost was so keen to secure Honda engines that he persuaded McLaren to sign the highly-rated Brazilian. In hindsight, he may have made a different decision. The team dominated and won 15 out of 16 races, with Prost clinching seven wins. He outscored Senna by 11 points but a controversial system gave Senna the title. Prior to 1990, only the best 11 results counted towards the championship standings, giving Senna the title by three points.

In 1988 the two drivers had mutual respect for each other but their battle for supremacy came to a head in 1989. Senna accused Prost of receiving favourable treatment from FISA boss Jean-Marie Belestre, while Prost accused Senna of “dangerous driving”. The pair dominated the season again, as Senna took 13 pole positions. In Japan, the final race, the tensions boiled over. Senna, needing to beat Prost to keep the title alive, dived up the inside of his rival into the chicane. Prost, aware of what he was doing, turned in and the pair clashed. Prost climbed out of the car and celebrated winning the title but Senna managed to get his car going and went on to win the race. Afterwards, Senna was disqualified for cutting the chicane, making Prost champion.

After such an event, it was impossible for the two to remain team-mates and Prost left for Ferrari to partner Nigel Mansell. Mansell and Prost had their own inter-team battle as Prost played on Mansell’s mentality. Five more wins for Prost gave him a chance of winning the title, but he trailed Senna by nine points. In Japan, they again clashed. At the start of the race, Prost took the lead but Senna deliberately rammed them both off the road, meaning he was champion this time. Prost labelled the move as “disgusting”.

Ferrari suffered a lot of engine failures in 1991. Prost was very critical about the team from Maranello and was kick out before the last race of the season. Gianni Morbidelli drove the last race in Adelaide for the French champ. Prost took a sabbatical in 1992 and returned in 1993 with Williams, a year after Mansell won the title. Upon hearing that he would be partnered with Prost, Mansell left F1. Williams were equally dominant as in 1992 and Prost won his fourth world title, holding off Damon Hill and Senna. He retired at the end of that season after it became apparent Senna was set to arrive for the 1994 season. He retired as a four-time champion and with 51 race wins.

Prost returned to the sport in 1998 with his own team ‘Prost Grand Prix’ but the experiment largely failed as they struggled to mediocre results. They folded at the end of 2002.

Alain Prost will never be called the greatest driver of all time. But he will always feature in the top five. His determination, tactical nous, blistering speed and forceful character have made him into one of the modern greats.

Prost says he didn't expect Renault to be so good

Dec.9 - Renault over-performed in 2020, according to team advisor and F1 legend Alain Prost. He told Le Figaro newspaper that the Enstone based team "didn't expect to be so good"..

In the second of our special episodes chronicling what it’s like to drive for Scuderia Ferrari, F1’s most storied team, we fast forward into the modern era, to hear what..

Aug.19 - Toto Wolff has slammed as "complete nonsense" claims that Mercedes is in the wrong over the 'pink Mercedes' affair. With the matter set to proceed to the international..

Aug.2 - F1 legend Alain Prost says he does not believe Racing Point's explanation about how the Silverstone based team designed its 2020 'pink Mercedes'. The team insists that it..

Jul.10 - Renault advisor Alain Prost says a question mark about Sebastian Vettel's motivation may have thwarted his chances of joining the French team. The Enstone based team..

Alain Prost has hit back at suggestions 'customer cars' could be a solution amid F1's corona crisis. Red Bull's Christian Horner and Ferrari's Mattia Binotto have suggested the..

In this series, I will look at the ownership and funding of the teams in F1 and maybe uncover a dark secret or two. Part 6: Renault Renault has undergone several changes..

Prost: F1 must be 'open' to plans amid pandemic

The F1 world should stand behind the sport's decisions about when and how the 2020 season gets up and running, according to Alain Prost. Some are critical of the efforts to go..

Alain Prost says it is very possible that Renault will lose Daniel Ricciardo at the end of 2020. In recent days, Renault junior Christian Lundegaard has admitted that he may be in..

﻿ This week’s guest on Beyond The Grid can stake a claim to shaping all modern F1 cars. Not only was John Barnard responsible for victoriously introducing the now ubiquitous..