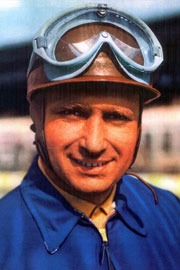 “Wherever the majestic music of motor racing can be heard; Through the sweeping high-speed curves of Spa, past the sun lit terraces of  Monaco, high on the Monza banking, down the historic ribbon of road that is Reims, through the flat wide opened space Silverstone, or winding round the unrelenting Nurburgring. One man stands out, cool and calm amid a split-second world where time is told in tenths: Fangio”

WG Grace, Pele, Rod Laver, Joe Davies, Babe Ruth, Ben Hogan. Formula One has its own original master, who still stands highest on the podium in the flawed and baseless cliché argument of ‘who’s the greatest ever’. Michael Schumacher may have won the most, Ayrton Senna may have been the fastest, Alain Prost may have been the cleverest, and Jim Clark may have been the most charismatic. But they all came after the original: Juan Manuel Fangio. 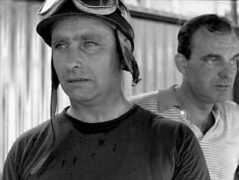 The Argentine, born in 1911, may have only raced in Formula One for eight years, but he still managed to win five world championships which stood as the record for almost 50 years. Add to that he won 46% of all his races, set 29 pole positions and managed to achieve all this while in his forties.

After success in racing long-distance road races in Argentina, Fangio arrived in Europe in 1948 to compete in Formula One. It was a tough experience as he retired from 11th on the grid in his Simca Gordini in Reims and didn’t race again that season. Fortunately, he wasn’t put off and won four out of the six races in 1949 against strong opposition. Fangio was so impressive that he started as the favourite for the inaugural driver’s championship in his Alfa Romeo. Of the six Grands Prix races the 1950 F1 season, he won three. However, his teammate Nino Farina also won three and claimed the maiden championship due to an extra fourth place. 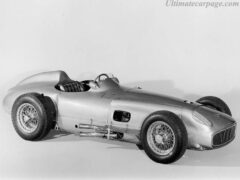 Fangio’s name may not be the first on the trophy but in 1951 he got his revenge. Three more race wins followed and he beat Italian Alberto Ascari by six points to claim his first World Championship. Incredibly Fangio was left without a race seat for the 1952 F1 season as Alfa pulled out of the sport following rule changes.

Luckily he was given a lifeline by Maserati but tragedy almost struck before the partnership really began. The defending champion agreed to race in a non-championship event at Monza, just 24 hours after another race in Dundrod.

Despite missing his connecting flight, Fangio made it to the start grid but had driven from Paris all night and arrived just half an hour before the start. Understandably he was largely fatigued and crashed the car on lap two. The Argentine was lucky to survive as the car crashed into a grass bank and tossed the unsuspecting driver out of the car. 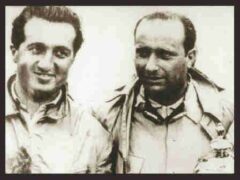 After months of recuperation, Fangio returned for the 1953 season with Maserati. In his absence, the Ferrari of Alberto Ascari had become dominant and the 1952 champion was powerless to stop the Italian running away with the title again. Fangio came second, with one win at Monza and three podiums. Fangio was destined to drive with Maserati again in 1954 until Mercedes came along. With the silver arrows, he dominated the 1954 season, winning six out of eight rounds and storming to his second world crown and in 1955 he won yet again. 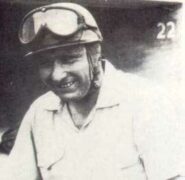 Just as Schumacher did 40 years later, Fangio moved to Ferrari, briefed with returning the world crown to Enzo’s team. It was a dubious season and Fangio’s car suffered regular mechanical problems. On the frequent occasions that it broke down he was handed his team mate’s car to finish the race and they would share the points. In the final round of the championship Fangio’s teammate, Peter Collins, was 15 laps away from winning the world crown before being forced to hand his car to Fangio. The 45 year-old won the race, and with the points shared he claimed his third consecutive championship and fourth overall.

Enzo Ferrari and his star driver didn’t always see eye to eye and not surprisingly Fangio left that season to return to Maserati who were still using the same car Fangio drove in 1954. Three wins in the opening three races looked to have set Fangio on his way to another world crown. However, a retirement in Britain left him with work to do in Germany.

The 1957 German Grand Prix at the Nurburgring is F1’s most iconic race. An error of judgement by Fangio saw him need to pit much earlier than he predicted and an awful stop put him 50 seconds behind the Ferrari pair of Mike Hawthorn and Peter Collins. Fangio then produced the fastest stint of racing ever seen in F1. He broke the lap record time and time again, which culminated in lap 20 being 11 seconds faster than the Ferrari’s. With one lap left he had hunted them down and past them both to claim a famous victory. That day he claimed his fifth world crown and his last ever win.

Afterwards he said “I have never driven that quickly before in my life and I don’t think I will ever be able to do so again”.

Prior to the 1958 season at a race in Cuba, Fangio was kidknapped at gunpoint. His captors hoped to force the abandonment of the race in a political protest against the government. They held Fangio for 29 hours before releasing him and even allowed him to listen to the race on the radio. Following the French Grand Prix of 1958, Fangio retired. In his last race, the leader Mike Hawthorn lapped the great man on the final lap, before slowing down to let him cross the line first so that he could complete the race. He retired at 47 with five World Championships. That great record lasted for 46 years, and there are still five records he holds:

Fangio is referred to as one of the greatest sportsmen Argentina has produced. His nickname, El maestro, El mejor (The Master, the best one) pays testament to his impact and status in F1’s history. Michael Schumacher also regarded to be one of the greatest ever, sums up Fangio’s impeccable career perfectly

”What he did stands alone”.