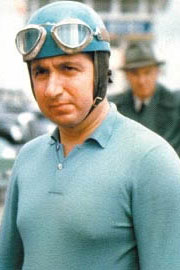 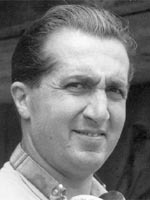 Alberto Ascari was Italy's second F1 champion and until today the last one in history.

The first Ferrari champion in Formula One history, there is no doubt Alberto Ascari earned a spot of glory in the history books of the pinnacle of motorsport racing.

Born on the 13th of July of 1918, Alberto was the son of a racing driver who was glorified in all of Europe, Antonio Ascari. His family roots pushed Alberto into racing, although his father died on the 25th of July of 1925 following a racing accident during the 1925 French Grand Prix at the Autodrome de Montlhery driving for Alfa Romeo.

Alberto's first taste of racing, however, was not on cars, as the Bianchi team signed him up to be a rider on the team when he was only a 19-year-old. His opportunity in racing cars came in 1940, when Enzo Ferrari, who was close to his father, offered him a seat in the 1940 Mille Miglia, but him and his teammate Giovanni Minozzi could not finish the race.

After World War II intensified and Italy joined in, Ascari took part and his garage, which he inherited from his father, was in service of the Military, with cars being maintained there. After the war was over, Ascari continued his life as a businessman until Luigi Villoresi, his business partner and fellow racing driver, convinced him of giving Grand Prix racing a chance.

After successes in 1947 and 1948 aboard Cisitalia, Maserati, and Alfa Romeo cars, and a huge win in the 1949 Gran Premio del General Juan Perón y de la Ciudad Buenos Aires in Argentina with a Maserati, Ascari was given a seat by long-time family friend Enzo Ferrari at the Scuderia for 1949 and the inaugural Formula One World Championship season in 1950.

In 1949, Ascari won seven renowned races for Ferrari, including the 1949 Gran Premio d'Italia and the second edition of 1949 of the Buenos Aires Grand Prix. Three of the seven races were won with the Ferrari 166 and the other four were won by Ascari behind the wheel of the Ferrari 125. 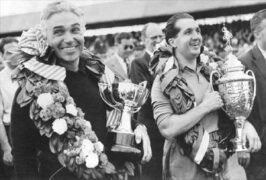 In the inaugural World Championship campaign, Ascari gave Ferrari its first World Championship podium with second place in the 1950 Monaco Grand Prix. The 1950 season was not great for Ferrari given Alfa Romeo's domination. Ascari would only add a second-place finish in the Italian Grand Prix at Monza thanks to a shared drive with Dorino Serafini. Ascari finished fifth in the 1950 season.

In 1951, results improved for Ferrari as they were able to catch their first World Championship victory in the British Grand Prix at Silverstone with a great drive by Argentine José Froilán González. Ascari made it three triumphs in a row with successes in France and at Monza, giving Ferrari its first home win in the World Championship era.

Trailing Fangio by just two points in the fight for the championship heading into the final race, Ascari's chance to give Ferrari its first World Drivers' Championship had to wait another season, as he only finished fourth in a race in which he led the early stages. Fangio won the race and his first title as tyre degradation hurt Ascari's race. Ferrari elected to race with 16-inch wheels instead of the 18-inch wheels, which proved costly.

The 1952 season was another story, as Alfa Romeo quit the sport due to lack of financial funds and the regulations were changed to Formula Two to enhance the number of cars on the field. Ascari, at the wheel of the Ferrari 500, won six of the seven European races (he competed only in the six he won) to earn his first championship and the first for a Ferrari driver. Also, he established the record for most race wins at a single year, which would last until 1963, when Jim Clark took seven victories in the year. 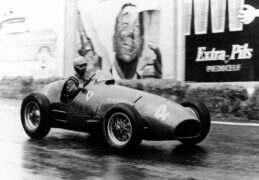 At the end of the 1953 season, Ascari, who became the first multiple World Champion, was the driver with the most wins in the history of the sport. He kept the record until the 1955 Argentine Grand Prix when Fangio won his 14th race on the 16th of January of 1955.

After his success with Ferrari, salary issues pushed him into accepting Lancia's deal. As a Lancia driver, he drove a couple of races for Maserati and another one for Ferrari before he was able to put himself behind the wheel of the Lancia D50 in the 1954 Spanish Grand Prix. He grabbed Pole Position and led for six laps in his first race for Lancia until his clutch failed. Ascari earned the points for the fastest lap and showed good pace before the failure, which was promising for 1955.

He won a couple of non-championship races before the start of the 1955 season, but the campaign did not start well after a retirement in the first race at Argentina, where he started second and led the race in the early stages. In the following race at Monaco, Ascari had a near-fatal accident in which his car fell into the sea and sank, but he did not suffer major injuries. He was leading the race before his crash.

Ascari, a superstitious man himself, was in Monza four days later, on the 26th of May of 1955, and was determined to test a Ferrari sports car. He did not have his racing suit nor his light blue helmet, which he did not allow anyone to touch due to superstition. To drive around Monza, he borrowed Eugenio Castelloti's helmet. After a couple of laps, a mysterious crash occurred on the Curva del Vialone, which is now the Variante Ascari, where the Italian legend died due to multiple injuries.

The causes of the crash are still unknown, however, the Ascari legacy is still having an impact in Formula One. Ascari will always be remembered as Ferrari's first World Champion and the only Italian to win the title with the legendary Italian outfit 2 times in a row.

Alberto once said about his family: "I don't want them to love me too much. Because they will suffer less if one of these days I am killed", still he was profoundly dedicated to his wife Mietta and his children Patrizia and Antonio.