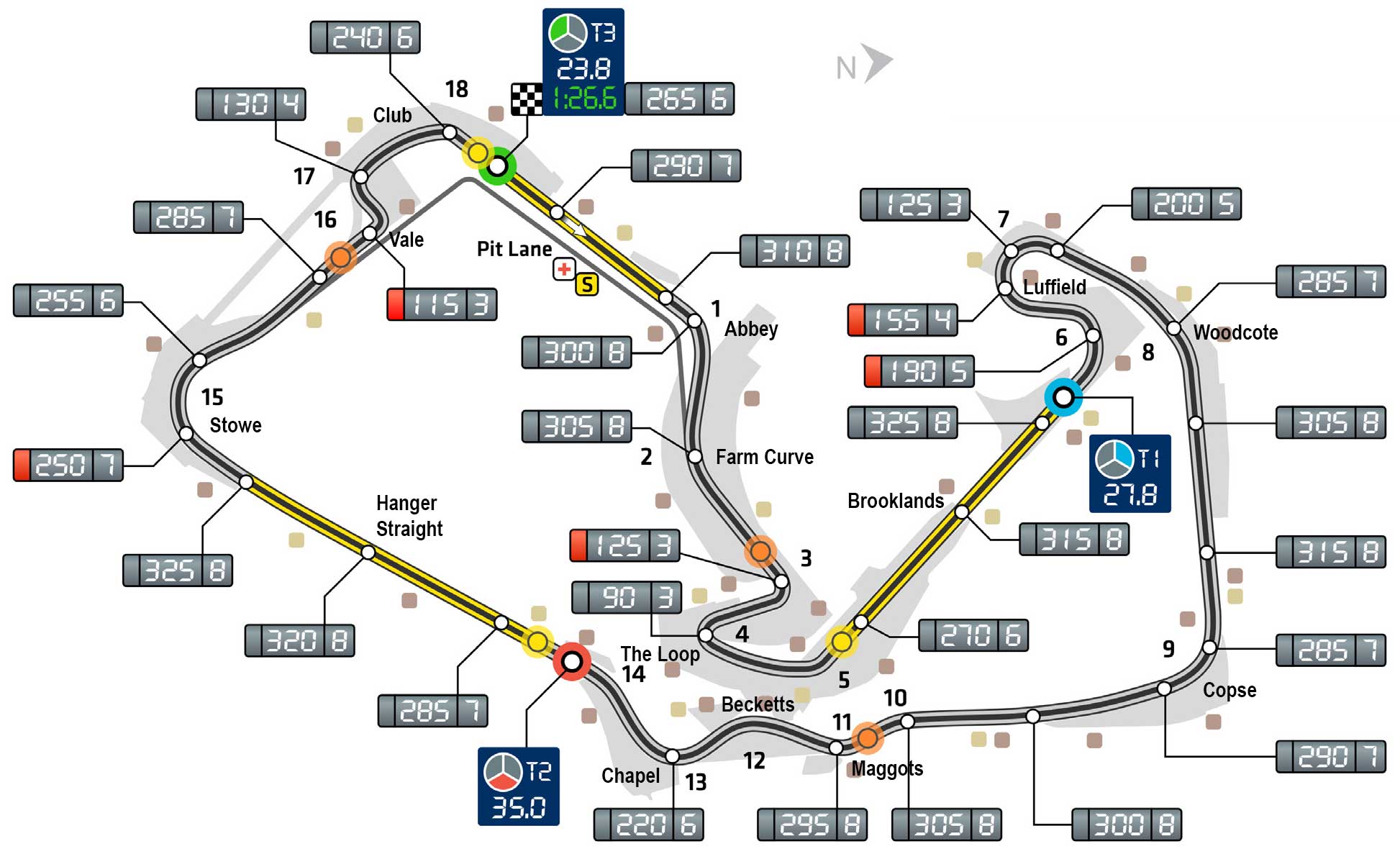 The Loop
This tight left hand corner was added when the circuit layout was revised for the 2010 British Grand Prix. Preceded by Village, a slow 2nd gear right hander taken at around 110km/h, The Loop is the slowest corner on the circuit. Also taken in 2nd gear, the drivers slow down to between 85-90km/h to negotiate this tricky corner. It is vitally important to get a good exit here, as it leads directly into Aintree, easily flat in the dry, and then the ensuing Wellington Straight. Delivering the exact torque requested by the driver to allow him to control his wheel slip and maximise the available traction is the key task for the engine engineer at this point. Last year’s winner Mark Webber was able to exploit this to the maximum, getting alongside Fernando Alonso down the Wellington Straight before outbraking him around the outside into Brooklands.

Much has been written about the Maggots and Becketts complex of curves and rightly so, but Copse, the right hander that precedes them, is equally impressive. At 265km/h it is the second fastest corner on the circuit after Maggots, the latter actually being taken flat out. The drivers approach Copse at around 300km/h on Silverstone F1 circuit in 7th, sometimes shifting down to 6th for the blind entry, only very lightly kissing the brakes to avoid upsetting the balance of the car, before almost immediately applying full throttle at the exit. The time taken from the driver lifting off to being fully back on it again is less than one second. The challenge for engine engineers is therefore to allow the engine to effectively function as a switch, going from “fully off” to “fully on” almost instantaneously.

Vale
Vale is the last big stop of the lap, with drivers typically attempting to exploit the braking zone as much as possible to find that last extra tenth in Qualifying. In contrast to The Loop, the drivers approach Vale at high speed, typically around 275-280km/h. Braking hard, it is possible to lock the rear wheels and compromise the entry and, in so doing, the exit. The drivers carry forward this penalty into Club, the 180° opening right hander that leads them onto the start finish straight. Get this corner right and the driver can be up a tenth, get it wrong and he can easily lose half a second. Engine engineers can help by providing the correct level of overrun support to stabilise the rear under braking, but they face almost the same conundrum! Too little and the driver locks the rears, too much and the driver struggles to slow the car down, potentially then locking the fronts.

Silverstone- The home of F1

As Bernie Ecclestone threatens to say goodbye to one legendary track, it is time for another to remind him that there is more to Formula One than money. Silverstone returns this weekend as it hosts the British Grands Prix, one of the most prestigious races on the calendar.

This weekend is special. Silverstone is set to host its 50th British Grands Prix, a truly remarkable achievement for a former World War airbase. And, despite the recent modifications, the track has retained its ‘old school’ feel.

The fast turns of Copse, Maggotts and Becketts are world famous. Stowe corner is the scene of many overtaking manoeuvre, while Brooklands and Luffield add a more technical challenge. Silverstone is held in high regard by all the drivers for its circuit, atmosphere and sadly, weather.

Thousands of fans have had their afternoons ruined by the typical British weather but without a splash of rain, you wouldn’t have the true experience of a weekend at Silverstone, the place where it all began.

The track still retains some of the WWII runways that were used as an RAF base. After the War finished in 1945, the site became abandoned before some locals decided to race around a makeshift track. In 1948 the site was leased by the Royal Automobile Club, who was looking for a place to stage a grands prix. The inaugural British Grands Prix was won by Italian Luigi Villoresi.

Two years later, and with a World Championship created for Formula One, Silverstone seemed the ideal race to kick it all off. The event was the first ever official Formula One race, and was attended by King George VI who remains the only British monarch to attend a grands prix. The first race was won by the first champion, Alfa Romeo’s Giuseppe Farina.

In the years that followed, early greats such as Alberto Ascari, Juan Manuel Fangio and Jack Brabham claimed wins. Sir Stirling Moss only ever won at Aintree. But through a dominant decade, it was the Brits that ruled the sixties. Jim Clark, Sir Jackie Stewart and Graham Hill changed the face of British Motor Sport. They were celebrities and inspired generations of racers. Hill never won at his home event but Clark and Stewart shared five Silverstone wins. Including successes elsewhere, Clark won the British Grands Prix five times, a joint record with Alain Prost.

The unique atmosphere and support from the crowd and a summer’s afternoon in the countryside had a happy knack of inspiring the home racers. 22 times a Brit has won his home race. James Hunt, John Watson, Nigel Mansell, Damon Hill, Johnny Herbert and David Coulthard ensured regular home success through the 70’s, 80’s, 90’s and early 2000’s. Since then, it’s been slow progress as only Lewis Hamilton, in 2008, has provided a home win.

There have been some memorable races too. In 1976 James Hunt won, but was later disqualified, after protests made by Ferrari and Niki Lauda. Nigel Mansell, who had the heart of a lion, thrilled the crown by hunting down and passing Nelson Piquet in 1987. In 1991, after winning the race again, he gave a lift to stricken Ayrton Senna. In 2003, Rubens Barrichello came from the back to win a thriller and only last year, tyre explosions made the race a nervy classic.

Throughout the years the circuit, which is based just behind a sleepy Northamptonshire village, has had to compete with other notable British circuits for the right to stage the grands prix. Donnington, Aintree and Brands Hatch have all had their turn but in the end it has always returned to its rightful home. The home of British Motor Sport and, proudly, Formula One: Silverstone.