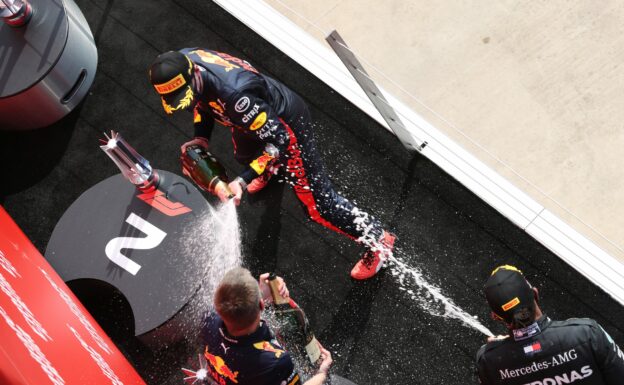 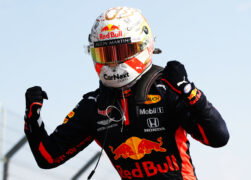 Max Verstappen won the 70th Anniversary F1 GP today. He started from P4 and won his 9th F1 race of his career at Silverstone. It was the 63th victory for Red Bull and Verstappen's 1st of the 2020 season.

The start of the race was without any problems. Sebastian Vettel had a very bad start and lost 9 places, because he spun off the track coming out of first corner and nearly collided with the two McLaren's. Max Verstappen who started in the Red Bull from P4, overtook Nico Hulkenberg for P3 already at the start.

Valtteri Bottas was able to stay ahead of Lewis Hamilton. After six laps Valtteri Bottas already got a radio message about his left tyres being critical.

After 7 laps Alexander Albon was to first who pitted to switch from medium to hard compound Pirelli tyres under his Red Bull Racing car.

Verstappen who was the only driver that started on the hard tyres was able to keep up with the pace of both Mercedes drivers and even could put pressure on Hamilton. After lap 13 Bottas pitted to get a new set of hard tyres. One lap later Hamilton did the same which gave Verstappen the lead of the race.

After both Mercedes drivers got new tyres they were unable to close the gap to Verstappen. The Red Bull driver even made the gap bigger towards Bottas. He pitted in lap 26 and came back on track right behind Bottas, who he passed right away on Luffield corner to take back the lead. 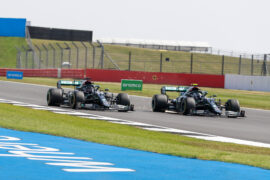 Because it looked like race leader Hamilton was going to do a 1 stopper, Verstappen got the radio message in lap 41 to attack the British driver. Verstappen closed in quite fast and Mercedes reacted by pitting Hamilton for fresh hard tires. After his pitstop Hamilton dropped back to P4 behind Ferrari driver Charles Leclerc and Verstappen took over the lead of the race.

With five laps to go Hamilton was already behind his teammate to battle for P2. Both drivers received a radio call from the team that the were free to race but had to keep it clean. In lap 50 Hamilton overtook Bottas with DRS. 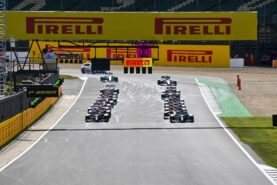 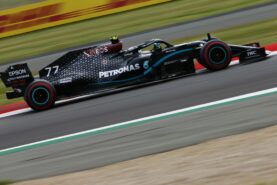