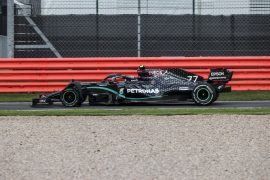 The weather during the first practice for the 70th Anniversary GP is set to be scorching today with highs around 32ºC.

Nico Hulkenberg once again drove for Racing Point in place of Sergio Perez and Valtteri Bottas has been confirmed to be staying at Mercedes for 2021.

The FIA also did their verdict on the protest made by Renault on the "pink Mercedes" saga. Racing point have been fined € 400.000,- and been deducted 15 points after Renault's appeal into the legality of the RP20 brake ducts was analysed.

A few changes were made to the track since last weekend. The kerb section at turn 14 has been extended and the tyre barrier has been made longer where Daniil Kvyat crashed last weekend and nearly hit the unprotected steel barrier.

Hulkenberg did a much better job than last week by being 4th quickest.Scuderia Ferrari also showed they did their homework much better than last week as both drivers showed to have similar pace as both Red Bull's and Racing Points this morning.

The quickest lap time 1:27.422 of last weeks FP was set by Max Verstappen in the Red Bull. 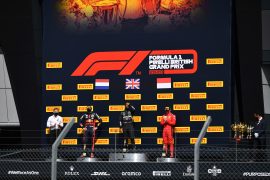 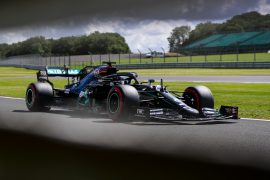