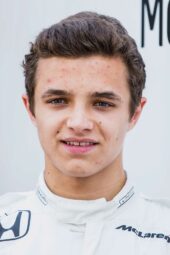 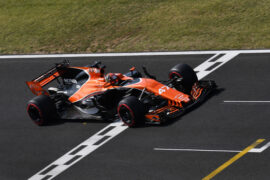 This British upcoming F1 driver became the youngest ever world karting champion at the age of 14. In 2016 he won the Formula Renault Eurocup and NEC 2.0 title. In 2017 he was given a reward for winning the 2016 McLaren Autosport BRDC Award. The reward was testing a Formula One car in 2017 on the Hungaroring in the week after the grand prix.

He tested the McLaren MCL32 on the 2nd of August 2017 and hugely impressed the world by delivered a fantastic performance at the wheel of the (normally poor performing) McLaren’s MCL32 car to be only 0.261s slower then that day’s fastest man and 4 times F1 champions, Sebastian Vettel.

Norris’ quickest lap was set on ultrasoft tyes, a step softer in Pirelli’s range than the supersofts utilised by Vettel for his fastest time, but even taking the performance difference of the tyres into account, ther 17-year-old’s F1 debut was eye-catching as he posted 91 laps.

With this performance, he certainly got a lot of attention and the F1 bosses will be knocking on his door for sure. It won't be a question of if, but when will Norris be a (very quick) Formula 1 driver.

On the 4th of September McLaren announced that Lando Norris will replace their current struggling Belgian driver Stoffel Vandoorne for the 2019 F1 season. He started his job on the 27th of November 2018 by testing the 2019 Pirelli tyres on the Yas Marina circuit, 2 days after the last race of the 2018 season on in Abu Dhabi. 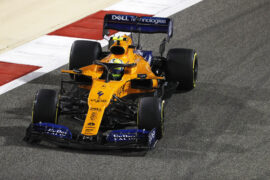 Lando Norris had a very good start of his first-ever Formula 1 season. In his first race at Melbourne, he qualified 8th. It was a long time since McLaren was allowed to go to Q3 during qualifying. He qualified in front of his much more experienced teammate Carlos Sainz who started on P18. He could not hold his 9th position during the race and had to settle for 12th.

In his second race at Bahrain, he started from P9 and drove a very strong race. He finished in the points for the first time and crossed the finish line as 6th. McLaren's best result before Bahrain was a 5th by Fernando Alonso in Australia a year before.

After his strong outing at Sakhir, he scored points in one o the following five races. Then, he had another good performance in France with 9th place and another 6th position at Austria, where he battled with Lewis Hamilton for third place in the first lap of the race. In Budapest, he added another couple of points to his tally with a 9th-place finish.

The first half of his debut season in F1 was efficient and, despite trailing Sainz by 34 points in the WDC, the British driver showed great speed on Saturdays, beating the Spaniard 8-4 in the first 12 races. The English rookie started the second half with a solid drive in the 2019 Belgian Grand Prix at Spa-Francorchamps, where he occupied the fifth position during the entire race until his engine stopped while starting the final lap of the race. 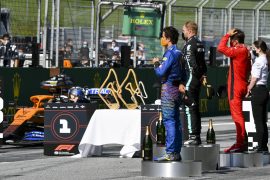 He scored points in six of the last nine races of the season, putting his tally of points at 49.

He led his surprising teammate Carlos Sainz in qualifying but fell to the Spaniard in terms of points. A solid first year in the campaign should have been even better for Norris which only adds more expectations for what is to come for his career. 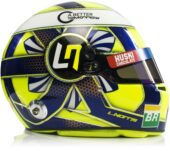 Jan.6 - With Melbourne and Shanghai already in doubt, race boss Jan Lammers remains confident that Zandvoort will host Formula 1 with spectators in September. "The likelihood is..

While the Abu Dhabi Grand Prix isn't going to go down as a thriller for anyone watching at home, it was the most tense and emotional experience we’ve had in quite a

Dec.17 - Times are changing in F1, with an old guard of drivers clinging to their seats at major F1 teams by the skin of their teeth, as young talent flows into the sport. There..

One of the many things this experimental F1 season has demonstrated is how minor adjustments in the format can deliver vastly different grands prix. From set-up to strategy, to..

The Bahrain Grand Prix proved to be a marathon rather than a sprint, but that didn’t stop it from being one of our best weekends of the season. Admittedly, after qualifying,..

Nov.12 - Mercedes' dominance is "making Formula 1 boring", according to McLaren driver Lando Norris. Max Verstappen caused a stir this week when he said that "90 percent" of the..

With the team out in Germany last weekend, our friends at Estrella Galicia 0,0 thought it was the perfect opportunity to test Carlos Sainz and Lando Norris their knowledge of all..

The glass was half full after our race in Germany, after a mixed result and an incredibly tight battle for third place in the Constructors’