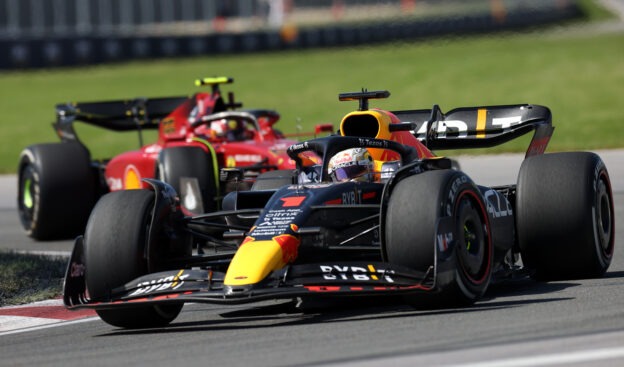 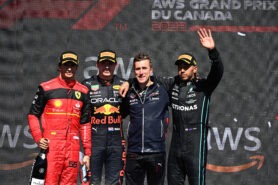 Max Verstappen scored his 26th F1 race win today. The Dutch driver won the Canadian F1 GP for the first time. It was his 6th race win of the 2022 season. The Red Bull driver started from pole and drove to the finish with a great result. It was the 82nd race win for Red Bull Racing.

The start of the 2022 Canadian GP was without any incident. When DRS was enabled Ferrari driver Carlos Sainz overtook his friend and countryman Fernando Alonso for P2. Behind them Mercedes driver George Russell pushing hard and in lap 6 he already was 5th. While Sebastian Vettel pitted already to switch Mick Schumacher was going backwards in the Haas and had dropped from P6 to P8.

The top 10 had started on the medium tyres. In lap 8 Magnussen had to do a pitstop to replace his damaged front wing. In the same lap Sergio Perez retired with a gearbox failure. A virtual safety car was used to recover the Red Bull. His teammate went for a free pitstop to switch to hard tyres. Lewis Hamilton did the same. Verstappen returned to the track on P3, while Hamilton dropped back to P6. 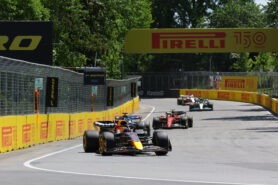 Verstappen was only 6.3 sec. behind race leader Sainz. Verstappen already passed Alonso for P2 in lap 15. In lap 18 Leclerc passed Alex Albon for P11. He now was right behind the Alfa Romeo of Valtteri Bottas.

Mick Schumacher's race ended in lap 20 when he parked the Haas in turn 7. Russell quickly made a pitstop to switch to hard tyres. The Spanish driver came back just in front of Hamilton on P3. Verstappen now was the race leader again. McLaren did a double stack pitstop that didn't turn out very well for Lando Norris. He lost valuable seconds when the team fitted the wrong tyres. Norris came back on the track on P17.

Alonso had not pitted yet and was already driving around on 22 old medium tyres. The strategy for Alpine clearly wasn't working for them and already lost two places to Sainz and Hamilton and was driving on P4 now. Alonso was 2 seconds slower than his rivals around him.

In lap 42 Leclerc did his first and only pitstop. The Ferrari driver drove on P6 and had a slow pitstop of 5.7 sec. to return to the track behind the Stroll train on P12, while Stroll was on P8. One lap later race leader Verstappen pitted for new set of hard tyres. He had a quick pitstop that took only 2.4 sec. but could not prevent he got behind the Mercedes of Hamilton on P3. The Dutchman overtook the Mercedes straight away on the long back straight. Hamilton also pitted and dropped 10 sec. behind his teammate on P4. Russell also pitted one lap later for new set of hard tyres. 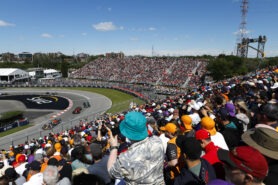 The top 5 cars in one shot at the hairpin

Tsunoda crashed the AlphaTauri in turn 1 coming out of the pits in lap 48. The safety car was deployed to recover the AlphaTauri AT03 and all drivers who still had to made their pitstop. The race was restarted in lap 55. Although all cars were driving very close behind each other nobody was able to overtake right away.

When DRS was enabled Carlos Sainz tried to overtake Verstappen on the straights. He did came very close but did not came close enough to pass the Red Bull. Behind them Leclerc also drove a great race and overtook both Alpines to get to P5 while starting from P20.

Verstappen and Sainz stayed very close until the finish flag, but Verstappen could maintain the distance between him and the Ferrari driver. 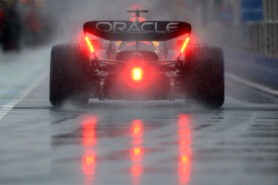 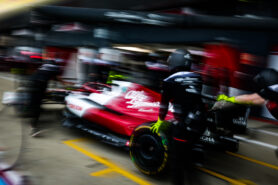