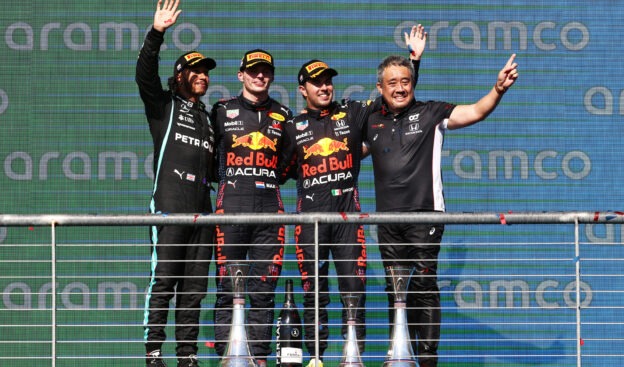 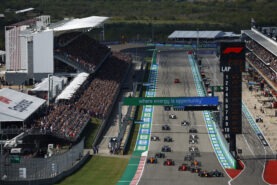 Start of the F1 Grand Prix of USA at Circuit of The Americas on October 24, 2021 in Austin, Texas. (Photo by Jared C. Tilton/Getty Images)

Max Verstappen scored his 18th race win today. The Dutch driver won the USA F1 GP for the 1st time. It was his 8th race win of the 2021 season. The Red Bull driver started from pole and kept his head cool during the end of the race. It was the 73rd race win for Red Bull.

It was a beautiful day for racing. The grandstands were packed and the event started off perfectly. All cars started the warm-up lap without any issues. The start of the race with Max Verstappen on pole position in the Red Bull and Lewis Hamilton behind him on P2 with the Mercedes was speculated to be very tight.

The start was clean and Hamilton had a perfect start on the 'dirty' side of the grid and was able to get along side the Red Bull of Verstappen to take the lead at turn 1. Verstappen had to heal and settled for P2 a couple of laps. Both McLarens and Ferraris had a great battle in the first lap.

Both Canadian drivers collided in turn 1, Lance Stroll spun in the Aston Martin and hit the front of the Williams of Nicolas Latifi. In lap 4 Esteban Ocon was the first to do a pitstop. The French Alpine driver switched to the hard tyres and got a new front wing.

The Dutchman was able to keep close to his rival and could use DRS to get closer. Both drivers pulled away from the rest of the field. In lap 7 Hamilton told his team on the radio that Verstappen was quicker than him at that moment as he was was about 0.7s behind him.

In lap 8 Fernando Alonso did his pitstop to go to hard tyres with a quick stop of 2.5 sec. He returned to the track with the Alpine being 17th. In lap 10 a lot more drivers did there first pitstop to go to the hard tyres. Verstappen also pitted at the end of the lap and came back to P5 with a pitstop of 2.9s. He was 19.8 sec. behind Hamilton now. After one lap he already had passed the McLaren of Daniel Ricciardo for P4 and was getting closer to his rival on the new tyres. 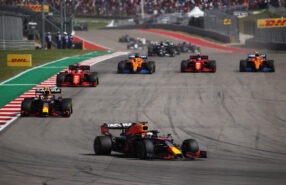 At the end of lap 13 Verstappen clocked the fastest lap with 1:40.426 and now only was 15 sec. behind Hamilton. Perez pitted to go to a new set of mediums. Hamilton pitted at the end of lap 14. His pitstop took 2.8s and was quite quick for Mercedes standards, but he lost the lead to Verstappen. Hamilton was now on P2 and 5.5s behind the Dutchman.

In lap 15 Pierre Gasly was the first who retired because the rear suspension had failed on the AlphaTauri. Bottas pitted in lap 16 and dropped from P5 to P11.

Halfway the race Hamilton had closed down the gap to Verstappen to 5s. Perez on P3 was 8.5s behind Hamilton and Ferrari driver Leclerc was more than 11s behind Perez.

In lap 28 there was a short virtual safety car period used to clean up some debris from the track. In lap 30 Verstappen pitted for second set of hard tyres. His stop was done in 2.8s. The Red Bull driver came back to the track on P3 only 1 sec. behind. Verstappen now was 17 sec. behind race leader Hamilton. Perez did his stop for a new set of hard tyres  one lap later.

Perez clocked the fastest lap in lap 33 and set it to 1:39.566 min.Hamilton didn't do his pitstop yet and was trying to extend his stint with 6 laps. Verstappen was only 13.3 seconds behind Hamilton with 20 laps to go. Verstappen now as almost 1 sec. quicker a lap and was hammering down Hamilton quite quickly. Hamilton pitted in lap 37 for a new set of hard tyres and now was 7.8s behind his title rival.

With 15 laps to go Hamilton scored the fastest lap for the extra point with a 1:38.485 min and decreased the gap to 6s. Esteban Ocon had to retire the Alpine with an engine problem. Daniel Ricciardo and Carlos Sainz also had a good fight for P5. Both even collided when Sainz tried to pass the McLaren. Because of the fight Bottas also was able to get closer and damaged the right side of his front wing end plate. 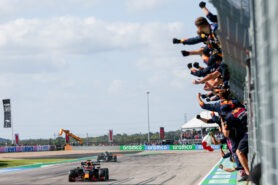 Max Verstappen wins the F1 Grand Prix of USA at Circuit of The Americas on October 24, 2021 in Austin, Texas. (Photo by Peter Fox/Getty Images)

Hamilton was flying and with 10 laps to go Hamilton had reduced the gap to Verstappen to 3s. The Dutchman now started to speed up his pace to try and stay in front of the British driver.

Alonso had to retire the car with a few laps to go when his rear wing broke down. Hamilton had closed the gap with 3 laps to go to 1.5s, but wasn't able to get close enough to use DRS. Both drivers pushed everything about their cars and Verstappen kept the lead to win the race. 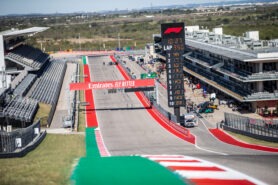 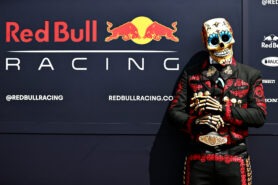