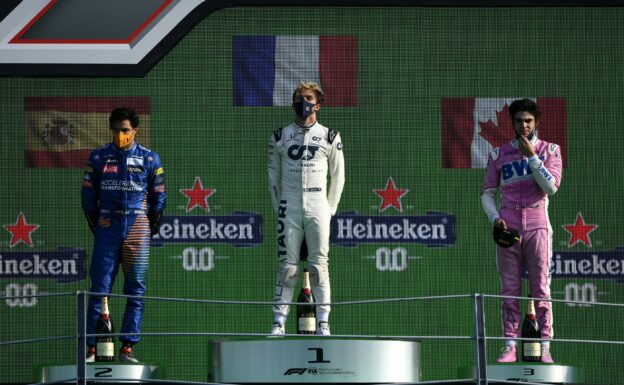 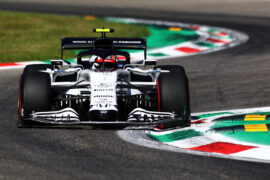 Pierre Gasly won the 2020 Italian F1 GP today. He started from P10 and won his first ever race at Monza. It was also the first race victory for the new AlphaTauri F1 team.

All cars came of the grid clean, but Valtteri Bottas had a bad start and lost a lot of places in the first lap and fell back to P6. Lewis Hamilton kept P1 and drove away from the two McLaren drivers who occupied P2 and P3.

In lap 6 Sebastian Vettel had a harsh moment when the brakes on his Ferrari failed. He had to use the escape road of turn 1. The embattled German driver had to retire the SF1000 that lap. It was the second time that a Ferrari car had to retire at Monza in 13 seasons.

In lap 20 Haas driver Kevin Magnussen retired his car with a gearbox issue. Because Magnussen stopped his car at the pitlane entry, his car had to be recovered and caused a safety car period which also closed the pits entry. Hamilton and Antonio Giovinazzi didn't saw that the pits was closed and pitted for fresh medium tyres. They retrieved a 10s stop & go penalty for that move.

When the safety car returned to the pits the race resumed. In lap 25 Charles Leclerc lost control of the Ferrari in Parabolica (turn 11) and had a highs speed crash into the tyre wall. Leclerc was unhurt, but the tyre wall had to be repaired, which caused the race to be stopped with a red flag. All cars had to stop in the pits to wait until the repairs were done. It was the first red flag since Monza 1995. That race also was the last time that both Ferrari's retired.

Lance Stroll, Pierre Gasly and Kimi Raikkonen were looking good for a podium. Hamilton still had to undergo his penalty when the race got restarted. The restart was again without any incidents and Mercedes choose to take the 10s stop & go penalty ride away in lap 29. When Hamilton returned to the track his engineer told him he had a gap of 23 seconds towards the field.

In lap 34 Carlos Sainz overtook Raikkonen for P2. At that moment Gasly was 4 seconds in front of Sainz. Both drivers could win their first F1 GP and totally went for it until the very last lap. 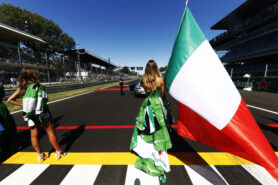 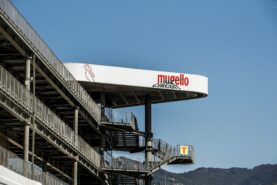