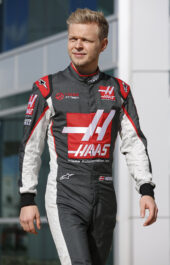 For a 22-year-old to make his debut at one of the biggest teams in the sport must mean he has plenty of talent. The Hamilton comparisons will be written everywhere, and so they should be.

Kevin Magnussen has been described as “very talented and very determined” by his new team principle Martin Whitmarsh and these are similar qualities boasted by Lewis Hamilton, who Magnussen hopes to emulate in his debut season.

Hamilton almost won the championship in his first year and the Dane has already spoken of going that tiny step further this year and becoming Denmark’s first F1 champion.

McLaren’s new recruit hopes to bring back the glory days to the Woking team, who have put a lot of faith in the talents of the 22-year-old.

Kevin Magnussen talks to the media

In replacing Sergio Pérez, Magnussen raced alongside Jenson Button in what will be a thrilling sub-plot as the old takes on the new in a head-to-head battle. A new ear of F1 is approaching and Magnussen is seen at the strongest of the new batch of drivers.

Magnussen has good racing pedigree. His father, Jan Magnussen, was also an F1 driver formerly with McLaren and Stewart. Magnussen hasn’t taken the contemporary route into the sport by going through GP2.

Last season he won the Formula Renault 3.5 Feeder series championship, while he has also had past experience in Formula Ford and almost won the Formula 3 Championship in 2011, but narrowly finished second despite winning seven races. 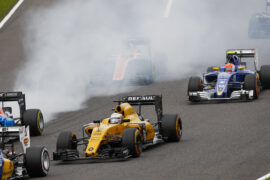 This isn’t a rash decision by McLaren. They have had their eyes on Magnussen for a long time and signed him as their development driver in 2012.

He attended the Abu Dhabi young driver test and impressed McLaren who felt he looked at home in the car from the off, while he was the fastest McLaren driver at the Silverstone young drivers test in July. He is one of two drivers they believe are future world champions. The second, Stoffel Vandoorne, finished second to him the Formula Renault champion of last season.

Magnussen also possesses the immense self-belief needed to become a success at a top team, further drawing comparisons with Lewis Hamilton. He has the aura that makes you believe he will be in F1 for a number of years to come, and, probably, near the top.

In 2015 he was test and reserve driver at McLaren and in 2016 Magnussen drove for Renault. The French car brand entered F1 again after being away since 2011. Because of this the Renault RS16 was very fast, so Magnussen could not show his talent on the track. His best finish was 7th in Russia. But could only score 7 points in total and retired 4th times.

To have better changes on good results he switched to Haas for the 2017 F1 season and got better results with the team that only is participating it's second season. Magnussen scored 19 points for Haas, 12 more than his season with Renault. His best finish was was 7th in Azerbaijan. The Danish driver ended up on 14th place in the 2017 F1 championship standings. 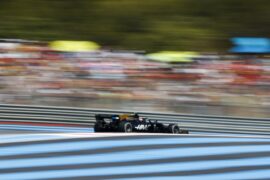 For 2018, Magnussen pulled out another level in his driving and outscored Romain Grosjean comfortably in the same car. The Danish scored points in 11 out of the 21 races of the calendar and his 56 points propelled Haas to the fifth place in the World Constructors' Championship, ahead of McLaren, which is Haas best result so far.

His best result in 2018 was 5th place, achieved at Bahrain and Austria. 2018 was his best year in terms of points, scoring just one more point than his previous best —55 for McLaren in 2014, his debut year—. 2019 did not start well for him, after a series of collisions with his teammate and tension between the team and lots of talk about his aggressive driving, he scored only 19 points in the first 12 races, which was not even close to his tally of 45 units at the same stage of the 2018 season.

After a difficult year for Haas, Magnussen only scored points in just four races during the year. He ended the campaign with 20 points, 12 more than his teammate, and finished 16th in the WDC.

Magnussen and Haas struggled in the 2020 season. Despite the car's lack of pace, Magnussen scored a point in the 2020 Hungarian Grand Prix after a good strategy to start the wet race.

On October 22nd, Haas announced both drivers, Magnussen and Romain Grosjean were leaving the team after the 2020 season.

Kevin Magnussen is one of the few drivers who doesn't have an official website.

Jan.22 - Kevin Magnussen can now "move on" after winning a court battle against his former manager, the Danish ex-Haas driver's father says. On Thursday, in a Copenhagen court, a..

Jan.12 - Kevin Magnussen could be heading to Le Mans in 2022. After losing his place in Formula 1, the Dane is embarking on a sports car adventure in the United States this year,..

Dec.12 - Kevin Magnussen says he would have liked to return to his native Denmark earlier this week - for a court case. The Dane is being sued by his former manager Dorte Riis..

Dec.11 - Two former teammates have farewelled Romain Grosjean from Formula 1 by saying the Frenchman was impressively fast over a single lap. Grosjean, who has revealed a photo on..

Dec.4 - Kevin Magnussen is not ruling out using 2021 as a springboard into America's top open wheeler category Indycar. It was announced on Thursday that, having lost his Haas..

Nov.27 - Kevin Magnussen looks set to begin his post-Formula 1 life by becoming a father. The buzz from the Bahrain paddock is that the Dane, who has been ousted by Haas, is close..

Nov.23 - Three current Formula 1 drivers could be joining two other F1 refugees in the top American single seater category Indycar next year. That is the prediction of Max..

Nov.16 - Kevin Magnussen is not ruling out staying in F1 as a reserve driver next year - but he is also keen on races like Le Mans and even the Indy 500. Haas is tipped to replace..

Nov.10 - Gunther Steiner has admitted that running an all-rookie driver lineup next year is "a risk". It is now widely expected that Haas is poised to announce that Ferrari junior..