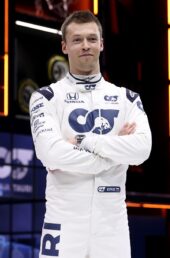 A GP3 championship in 2012 was the catalyst for the surprise move to Toro Rosso as Kvyat had a strong finish to claim the title. He joined the Red Bull academy in 2010 and has also claimed the Formula 2.0 Alps trophy.

Sebastian Vettel’s replacement at Red Bull will be entering only his third season in Formula 1, emphasising how talented many consider young Russian Daniil Kvyat to be.

Kvyat impressed at Red Bull’s junior team Toro Rosso in 2014, and he was picked over the more experienced Jean-Eric Vergne for Vettel’s seat.

Red Bull has shown ruthlessness before with their young drivers, and history shows that they only promote the very best to the main team.

However, Kvyat made a lasting impression in his first season by beating Daniel Ricciardo in the championship standings.

The 21-year-old was chosen ahead of more experienced drivers to get the Toro Rosso's 2014 seat , and he duly delivered a promising season by scoring eight points including two on his debut in Australia.

Naturally fast, his most impressive performances came in qualifying where he finished fifth on two occasions, including in home race at the inaugural Russian Grand Prix.

With Carlos Sainz and Max Verstappen in place at Toro Rosso in 2015, Kvyat was under immediate pressure to impress at his new team, just as his new team-mate Daniel Ricciardo did in 2014. 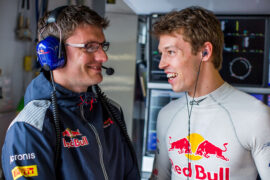 After a sluggish start, he found form and secured his first podium with 2nd in Hungary. As the season went on, he grew in confidence and Ricciardo struggled to compete.

2016 was not a good season for Daniil. After being responsible for 2 collisions early in the season he was replaced by upcoming star Max Verstappen. Daniil did not pick up his pace of earlier seasons and was outperformed by Carlos Sainz, his new very talented Spanish teammate.

In 2017 Kvyat was driving for Toro Rosso, but didn't perform as he use to and made again a lot of error's. His mistake during the Singapore GP probably has ended his driving at Toro Rosso that season. He was replaced after the US GP by Pierre Gasly.

Kvyat was ousted by Red Bull and was lucky to get a development roll at Ferrari that kept him fit and connected to the Formula 1 world. During the 2018 F1 season he was their simulation driver. On the 29th of September Toro Rosso announced that the Russian driver would race for the team during the 2019 F1 season. 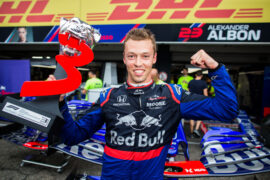 2019 was a year of not many expectations for the Russian since he did not start one of the last 24 races in the F1 championship. However, he performed very well from the start, scoring a point for Toro Rosso in the Australian Grand Prix and scoring points at Spain, Monaco, and Canada showing good overtaking skills. He had tough races at France and Austria, however, he returned to the points with a ninth-place in Britain and scored an unbelievable podium at Hockenheim in the rain, a day after his daughter was born. It was the third podium of his F1 career and the second in Toro Rosso's history.

After scoring more points than his teammate Alex Albon in the first half of 2019, his sensational podium at Germany, and Pierre Gasly's struggles with Red Bull, the Russian was a candidate for many to take Gasly's seat at Red Bull. However, it was Albon who was promoted to the main team, as the Austrian squad announced on the 12th of August.

After the disappointment of not replacing Gasly at Red Bull, Kvyat then got outscored by the French driver in the final half of 2019. The Russian driver's best score of the second half of the 2019 season occurred at Belgium, where he finished in a solid seventh place. Then, he only finished in the points three times (10th at Suzuka and Brazil and ninth in Abu Dhabi).

Kvyat finished the 2019 campaign in 13th place in the World Drivers' Championship with 37 points.

Kvyat's 2020 Formula 1 season for AlphaTauri had many ups and downs, but his performance in the 2020 Emilia Romagna Grand Prix was awesome, as he finished fourth and was pressuring Renault's Daniel Ricciardo for third place in the closing laps of the race.

Daniil Kvyat driving the AlphaTauri AT01 at the Hungaroring (2020)

Kvyat's Funniest Moments | Behind The Scenes!

Get to know the REAL Daniil Kvyat! It's been a fun few years travelling the world with our favourite Russian, so we compiled all of the best bits from behind the scenes (that..

Meet 20-year-old Japanese driver, Yuki Tsunoda. He's been stunningly quick in both F3 and F2 and now, with backing from Honda, he replaces Daniil Kvyat at Alpha-Tauri-Honda. As..

It was a bit of a mixed weekend for Daniil Kvyat in Abu Dhabi. He blitzed Qualifying in what he described as one of the best Qualifying sessions of his career, however, after a..

Dec.13 - Daniil Kvyat insists he is not making a last-ditch effort to hang onto his place in Formula 1. The Russian qualified seventh in Abu Dhabi, calling it the best qualifying..

Dec.11 - Several drivers are waiting for Red Bull to finally announce its Formula 1 driver lineups for 2021. It is known that Max Verstappen and Pierre Gasly will lead the Red..

Dec.6 - Daniil Kvyat says he has "accepted" the likelihood that he will be left without a Formula 1 seat for 2021. One of the only doubts about Honda-backed Formula 2 driver Yuki..

Nov.29 - Daniil Kvyat says he isn't even sure if he will be offered the role of Red Bull's official reserve driver for 2021. The Russian, likely to be replaced by Honda-backed..

Nov.14 - Two current Formula 1 drivers are floating the possibility of taking sabbaticals in 2021. Alongside Nico Hulkenberg, Sergio Perez is in the running to replace the..

Nov.6 - Dr Helmut Marko blocked Yuki Tsunoda from contesting a recent junior series race so that the Japanese can focus on Formula 1. It is another clear sign that the boss of Red..