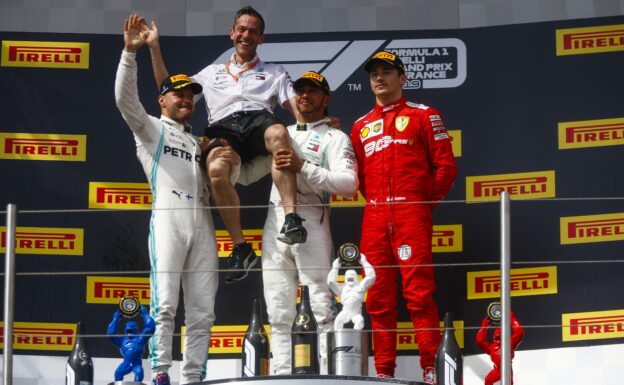 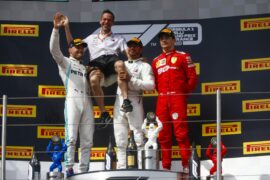 Lewis Hamilton scored his 79th F1 victory and the 95th win for Mercedes today. Valtteri Bottas came home as 2nd and made it the 50th 1-2 finish for Mercedes. It was the 6th race win of the season for Hamilton.

The start of the 2019 French Formula 1 Grand Prix was clean. A lot of cars came very close in the tight first turn. Carlos Sainz almost passed Max Verstappen but couldn't make it stick. Verstappen who was on the racing line had a good exit out of turn 1 and almost overtook Ferrari driver Charles Leclerc for P3, but the Ferrari showed it's speed and accelerated away, leaving Verstappen biting his dust. Daniel Ricciardo lost 2 places because he stayed behind Norris in turn 1.

Lando Norris was passed by his McLaren teammate Sainz in lap 1. Sebastian Vettel who was behind both McLaren drivers passed Norris in lap 5 and Sainz in lap 7 for P5. Alfa Romeo driver Antonio Giovinazzi who started the race on P10 made an error in lap 8 and came into the pits as first to switch to hard tyres.

In lap 10 Sergio Pérez received a 5 sec. time penalty for leaving the track and gaining an advantage in the first lap. 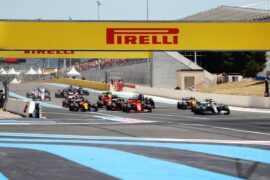 Start of the race during the French GP on June 23, 2019 in Circuit Paul Ricard, France. (Photo by Jerry Andre / Sutton Images)

Daniel Ricciardo overtook his "old" Red Bull Racing car in lap 19 for the virtual P8. Max Verstappen switched from medium to hard in lap 21 to try and under cut P3 of Charles Leclerc. Leclerc answered to pit the next lap for his hard tyres.

Second place driver Valtteri Bottas did his pitstop in lap 24. He also switched to the hard tyre. His teammate and race leader Hamilton did the same the next lap and didn't lost the lead the whole race.

In the penultimate lap Vettel did a pitstop to get a new set of red soft tyres to try and get the extra point for the fastest lap of the race and succeeded. Leclerc came very close to pass Bottas for P2, but came short on the amount of laps.

We also have the animated timelapse of the 2019 French F1 GP for you in which you can clearly see how boring this race was... 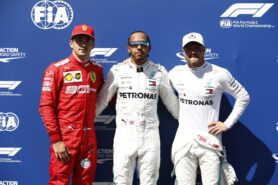 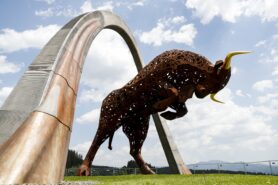