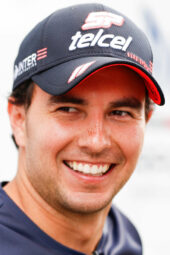 From over-rated pay driver, to Lewis Hamilton’s successor at McLaren, and now back to mid-table obscurity, Sergio Pérez has come along way since his debut five years ago.

The Mexican had a patchy start to life at Force India, but he excelled last season and drove better than ever before. He soundly beat his renowned team-mate, Nico Hulkenberg.

Perez’s F1 career stated at Sauber in 2011 as team-mate to Kamui Kobayashi. Perez is one of many recent additions to the F1 grid who brings his own sponsorship, in this case from a Mexican company, Telmex, who entered an immediate agreement with Sauber.

Due to these circumstances, Perez was welcomed with a lukewarm approach from many inside F1, despite him  finishing 2nd in the GP2 world championship in the previous year.

On his debut Perez, or ‘checo’, revealed his greatest strength, tyre preservation, as he stopped for fresh rubber just once en route to finishing 7th.

Sergio Pérez and his Sauber C31

Although the cars were disqualified, it didn't take log for Perez to net his first points, with a ninth placed finish in Spain. After a heavy crash in qualifying at Monaco’s infamous tunnel exit, Perez missed two races due to the injuries.

A solid end to the season brought him a career best 7th in Britain to finish overall with 14 points. Despite scoring less than half the points of his team mate, Perez was quickly re-signed for the next season.

The 2012 Sauber car was a clear improvement, and Perez’s tyre skills came to fruition very early again. Only a last lap slide saw him go from 5th to 8th in Australia, before almost claiming victory in Malaysia.

In wet conditions Perez was in superb form as chased Fernando Alonso’s slow Ferrari, a poor attempt at an over take cost him an almost certain victory, but a 2nd place did bring him his first ever podium.

A strong series of points in the middle of the season, culminating in another superb drive to finish 3rd in Monza, prompted McLaren to sign him for the 2013 season.

However, Perez’s form dramatically dipped as he struggled for points in the final 6 races. He finished with a total of 66 points, and only six more than Kobayashi.

Perez had a troubled 2013 season. Regular crashes earned him criticism from some of the sport’s biggest names, while he struggled to control McLaren’s poor car.

There were moments of brilliance from the Mexican, but ultimately it was a doomed year which saw him finish 24 points behind Jenson Button. McLaren acted quickly to replace him, but luckily Force India were waiting in the wings. 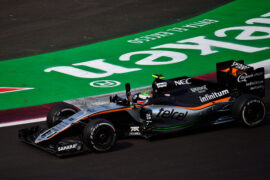 A podium finish in Bahrain was the highlight of an up and down season in 2014, but he finished 37 points behind Hulkenberg.

However, he was outstanding 2015 season as he collected regular points and a podium in Russia. The driver McLaren thought they were getting has finally arrived. The return of the Mexican Grand Prix is of course very nice for Mexican Perez, who can drive a real home grand prix now.

The 2016 season was again a great success for Perez. The Force India VJM09, which is fitted with the very powerful Mercedes power unit could even beat the Williams this season. 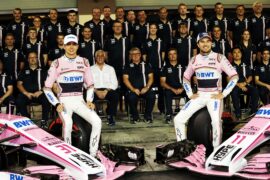 Ocon (FRA) and Perez (MEX) at a team photograph.

In 2017, Perez lined up alongside his new teammate, Esteban Ocon, and both had a thrilling battle which more than once ended in tears for the team. Trouble started in Canada, where they were strong and had a podium on sight, but Perez did not allow Ocon to get through and attack Daniel Ricciardo after the Frenchman asked the pit wall for that opportunity. Then, Ocon attacked Perez and the Mexican blocked him quite harshly. At Baku, they made contact and damaged the race of both cars in an eventful race which easily could have been Force India's first win in F1. Perez collided into Ocon at Hungary and everything exploded at Belgium, were Perez put Ocon into the wall.

The team had to intervene and the situation calmed down. Perez was able to stay ahead of his young teammate in the WDC 100-87 and secured his place at best of the rest for the second straight year. In 2018, he was Ocon's teammate again and had a good year despite the team's financial struggles and judicial situations throughout the season. 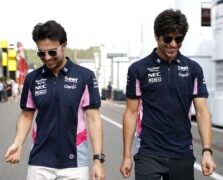 Force India changed its name and management during the 2018 season, with Lawrence Stroll as the main investor to save the team's financial woes. The team was renamed as Racing Point. Perez scored a podium at Baku in 2018 and finished the year ahead of Ocon again, even though he got beat in qualifying by the Frenchman, who lost his seat in favour of Lance Stroll for 2019.

In 2019, Perez dismantled Stroll in qualifying with a 12-0 thrashing. However, the Canadian worked better on Sundays in the first half and finished ahead of Perez on points in the first 12 races 18 to 13. Perez scored points in three races of the first half of 2019 and had a streak of eight races without finishing in the top 10 before the summer break.

Perez had an extraordinary second half of 2019. The Mexican driver scored points in eight of the nine races of the second half. He only failed to score at the 2019 Singapore Grand Prix due to an oil leak when he was running 10th on lap 43.

He finished the year with 52 points, his lowest tally since he scored 49 for McLaren in 2013, but finished inside the top ten in the WDC for the sixth consecutive year.

Pérez had an extraordinary 2020 season, scoring points regularly and fighting for P4 in the World Drivers' Championship even after missing two rounds due to a positive Covid-19 test. In the 2020 Turkish Grand Prix, Pérez achieved his ninth career podium with an amazing second-place finish behind champion Lewis Hamilton. 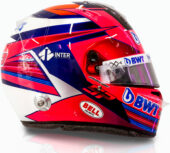 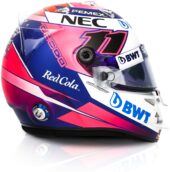 Horner insists that Red Bull signed Perez for his skills

Jan.19 - Red Bull doesn't need the financial backing that can be brought from Mexico by Sergio Perez. That is the insistence of team boss Christian Horner, who says Red Bull only..

Jan.8 - Max Verstappen says his aim is to "destroy" his teammates in Formula 1. It is an ominous warning for the experienced Sergio Perez, who is replacing Alex Albon after the..

Dec.23 - Dr Helmut Marko has defended Red Bull's notorious driver development program - even though outsider Sergio Perez is replacing Alex Albon for 2021. It's only a one-year..

Dec.22 - Nico Hulkenberg says Sergio Perez "deserves" to have been signed up by Red Bull for 2021. Dr Helmut Marko, the key driver decision-maker in the energy drink owned camp,..

Dec.21 - The arrival of Sergio Perez at Red Bull "will make Max nervous". That is the view of former F1 driver Giedo van der Garde, who was commenting on the news that Perez will..

7 reasons why Checo belong at Red Bull By Peter Windsor

This channel, like many others, has been imploring Red Bull to hire Sergio Perez for 2021...and today the team confirmed that it's really going to happen. In this video Peter..

Dec.18 - Red Bull Racing can today confirm that Sergio Perez will join the Team and race alongside Max Verstappen in the 2021 FIA Formula One World Championship. Current driver..

It’s been a difficult year for many Formula 1 drivers, but Alex Albon has had a harder time than most. The British-born Thai driver hasn’t lived up to expectations in the 2020..

Dec.18 - The last two race seats on the 2021 Formula 1 grid look set to be confirmed with just days to spare before Christmas. After a full year of speculation, Mercedes hinted on..

Dec.17 - With AlphaTauri's 2021 lineup now complete, owner Red Bull will turn its attention to the identity of Max Verstappen's next teammate at the senior outfit. The open secret..