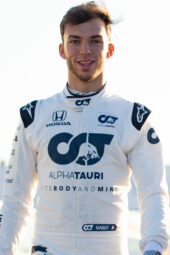 After the first was the 2015 F1 season reserve driver for the Red Bull Racing team. The French driver made his F1 race debut at the 2017 Malaysian Grand Prix in the Toro Rosso STR12 with a Renault power unit for the Toro Rosso team.

He was asked by Toro Rosso team principal Franz Tost to replace struggling Russian driver Daniil Kvyat who crashed again during the Singapore GP 2 weeks before his debut.

The switch was also done to compare both drivers for 2018 drivers choices. He will drive at least 2 races. He cannot attend to the US GP, because Pierre can win the Japanese Super Formula championship that weekend.

Gasly did a very good 2017 season. He finished his first race on P14. He didn't win any points that season. He out-qualified his teammates, Brendon Hartley and Carlos Sainz, 3 times and finished the highest in the 7 races he drove. He ended up as 22nd in the 2017 drivers championship. 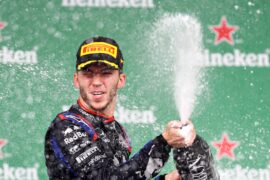 On August the 20th of 2018 he was presented as 2019 Red Bull Racing driver to replace Daniel Ricciardo, who had chosen a future outside the Red Bull family and got a driver at Renault for 2019. However, his Red Bull Racing stint only lasted 12 races, as he was demoted to Toro Rosso on the 12th of August and replaced with Alexander Albon due to his struggles during the first half of 2019.

Gasly scored 63 points and no podiums in the first half of the year, which was not even close to Max Verstappen's tally of 181 points and two wins. The French driver only out-qualified his teammate once and only finished ahead of the Dutchman in the British Grand Prix —after Verstappen's RB15 was hit in the rear by Sebastian Vettel's Ferrari—.

In his first seven races back at Toro Rosso, Gasly performed very well and scored points in four occasions. In the 2019 Brazilian Grand Prix, Gasly's weekend started in a bad way due to an engine problem in FP2. However, he recovered and qualified seventh for the race. A grid penalty for Ferrari's Charles Leclerc meant Gasly started from sixth place.

After the majority of the race had occurred, Gasly was on pace to score good points for his team. However, two late Safety Car periods and a collision between the Ferraris of Leclerc and Sebastian Vettel pushed him close to the podium. With second-placed Lewis Hamilton pitting for soft tyres during the second SC period with few laps left, Gasly was running third, ahead of the champion. 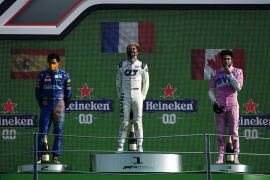 At the restart, Hamilton passed Gasly and was fighting for second place with the Red Bull of Albon. As Hamilton tried to overtake Albon on the inside, both cars touched and Albon spun. Gasly overtook both and was able to hold off Hamilton's charge by just 0.062 seconds in what was a thrilling fight until the chequered flag.

Gasly took his first podium with a P2 finish and called it the best day of his life. After a roller coaster of a season, the Frenchman achieved an unbelievable result for him and Toro Rosso's second podium of the year.

A hit by Lance Stroll at the start of the finale at Abu Dhabi prevented him from scoring points and he had to settle with seventh in the WDC with 95 points.

Pierre Gasly started the 2020 F1 season with great level, scoring points in four of the first seven races for AlphaTauri (previously known as Toro Rosso). In the 2020 Italian Grand Prix at Monza, Gasly won the race after starting from 11th on the grid and seeing an early pitstop and a timely red flag help him take a lead that he would not surrender until the chequered flag.

It was the first win for a French driver since Olivier Panis won the 1996 Monaco Grand Prix.

Pierre Gasly racing the AlphaTauri AT01 during the British GP (2020)

Gasly sure Honda won't give up before their F1 adventure ends

Jan.19 - Pierre Gasly says he is sure Honda won't "give up" in 2021, despite it being the Japanese manufacturer's last official season in Formula 1 for now. Indeed, Honda is..

One last vlog entry for Pierre Gasly for 2020, our Frenchman wraps-up the year after the Abu Dhabi Grand Prix in what was the most successful season in our

Pierre's Podcast | Wrapping Up The 2020 Season | Powered By Honda

Honda sat down with Pierre Gasly to chat about the 2020 season. The highs, the lows, and an Australian Grand Prix that never

Marko insists he has 'nothing against Gasly'

Oct.31 - Red Bull needs Pierre Gasly to lead the AlphaTauri team from the cockpit, according to Dr Helmut Marko. Although already signed up for 2021, Frenchman Gasly expressed..

Friday it was his car, but Sunday it was Pierre Gasly who was on fire! Our Frenchman started the Portuguese Grand Prix in ninth position, made his Soft tyres last whilst making..

Oct.23 - With Haas clearing the decks for 2021, the 'silly season' has exploded at the scene of Sunday's Portuguese GP. Haas' Kevin Magnussen and Romain Grosjean appear unlikely..

Oct.16 - Esteban Ocon "should not be ashamed" of his performance at Renault so far in 2020. That is the view of his boss Cyril Abiteboul, amid speculation the team might be..