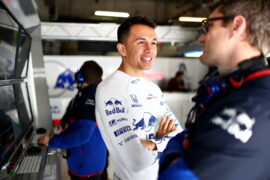 Alexander Albon prepares to drive in the garage during practice for the F1 Grand Prix of China at Shanghai International Circuit on April 12, 2019

Karting
Alexander started karting at the age of 8 back in 2005. He started competing in his local Hoddesdon karting championship. In 2006 Albon took part in the cadet class and finished 1st at the Kartmasters British Grand Prix.

He also participated in the Super National Honda Cadet Championship and finished 1st in 2006 and was 2nd in 2007. From 2008 till 2010 he drove at the KF3 karting class and won a lot of prices during this period. He won the Kartmasters British GP, the Formula Kart Stars Championship, the KF Winter Series, the Super 1 National KF3 title, the CIK-FIA European Championship and even the CIK-FIA World Cup.

In 2011 Albon took part in the KF1 class. He finished 2nd in the WSK Euro Series and also ended up 2nd in the CIK-FIA World Championship behind the Dutch talented driver Nyck de Vries. Alexander Albon & Daniil Kvyat and the Scuderia Toro Rosso team pose for a photo to commemorate the teams 250th F1 race before the F1 GP of China at Shanghai International Circuit on April 14, 2019.

Formula Renault 2.0
In 2012 Albon stepped up to open-wheel racing for the EPIC racing team in the Formula Renault 2.0 Eurocup series. He ended up 38th out of 49 drivers who participated in this championship and had a tough season without scoring any points. He also became part of the Red Bull Junior programme.

He stayed in the series for the next 2013 season but switched teams. He could drive for KTR and was more successful this season. He scored 1 pole position and drove one fastest lap during a venue on the Red Bull Ring in Austria. He ended up as 13th in his second season with 22 points in the 2013 Formula Renault 2.0 season.

In 2014 he was getting the hang of it and finished 3rd in the championship with 117 points and a pole position on the Nürburgring. 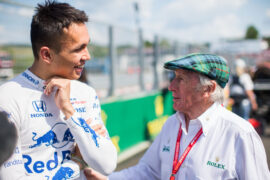 Alex Albon with Sir Jackie Stewart at the Hungaroring on August 04, 2019 (Photo by Peter Fox/Getty Images)

European F3
The next 2015 season he drove F3 at the Signature team. He won 4 races and scored 187 points to finish 7th in this championship.

GP3 Series & F2
Albon again stepped up to the GP3 series to drive for ART Grand Prix in 2016. He became a teammate of Charles Leclerc who won the championship. Albon was 2nd with 4 race wins and would also drive for ART the following season in F2. He ended up in the 2017 F2 championship as 10th with 86 points.

In 2018 Albon also took part in the F2, but switched teams and drove for the DAMS team. He won 4 races and 3 poles that season to score 8 podiums and 212 points, which gave him P3 in the championship. Formula E & F1
Albon signed a contract to race for the Nissan E-DAMS team in 2018/19 to be the teammate of Sébastien Buemi in Formula E. On the 26th of November the news got out that he was released by the Nissan team and would become Formula 1 driver for Toro Rosso F1 Team next to Daniil Kvyat during the 2019 F1 season.

Albon showed his racing abilities with good performances during the first half of the 2019 season, especially in China and Germany. In Shanghai he had to start from the pit-lane because he wrecked his STR14 in FP3 and the team couldn't fix it on time for qualifying. He drove a great race and finished 10th. In the rain-hit German Grand Prix, he drove an F1 car in the wet for the first time and finished sixth. The best result of his career at the pinnacle of motorsport so far.

After scoring points in five of the first 12 races in 2019 for Toro Rosso, Red Bull announced on the 12th of August that the Thai driver was promoted to the Milton Keynes squad. He will drive alongside Max Verstappen to replace the underperforming Pierre Gasly starting from the 2019 Belgian Grand Prix to the end of the season. 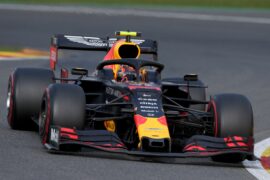 Alexander Albon of Thailand driving the (23) Aston Martin Red Bull Racing RB15 on track during the F1 Grand Prix of Belgium at Circuit de Spa-Francorchamps on September 01, 2019 in Spa, Belgium.

In the 2019 Belgian Grand Prix, his debut race for Red Bull, Albon had to start from 17th place due to penalties for exceeding PU elements. The Thai racer drove a brilliant Grand Prix at Spa and secured the first top-five finish of his F1 career.

Albon produced an amazing overtake against Racing Point's Sergio Perez in the final lap which gave him the fifth position. Albon overtook the Mexican after the Eau Rouge-Raidillon section even with his right-hand tyres on the grass.

Both drivers were called by the stewards but the situation was deemed as a racing incident.

In the 2019 Italian Grand Prix, the Thai driver lined up ninth in qualifying after he could not set a time during a weird Q3 at Monza.

Albon started the race and had a hard fight with McLaren's Carlos Sainz, with the Spanish driver squeezing Albon out of the track at the first Lesmo turn. Albon was able to recover and took advantage of Sebastian Vettel spinning out of the points and Sainz's retirement to finish in a solid sixth place. In the 2019 Singapore Grand Prix, he started from sixth place and finished in the same position. Then, he crashed during qualifying for the 2019 Russian Grand Prix, which forced him to start the race from the Pit-Lane. However, he had a great Sunday, finishing fifth after making great overtaking moves.

In his first seven races for Red Bull Racing, he finished in the top six. During the 2019 Mexican Grand Prix, he ran third in the early part of the race before a two-stop strategy threw away his chance of a first-ever podium. Then, at Brazil, he was running second with less than a handful of laps remaining and Lewis Hamilton crashed into him, which again took away the possibility of his first podium in F1.

He finished 2019 in eighth in the WDC with 92 points. He showed decent pace with Red Bull and consistently put the car in at least in the top six, where it belonged. Although he did not have particularly stunning performances, the team announced on the 12th of November that Albon was staying with them for the 2020 season.

In the 2020 Formula 1 season, Albon had a shot to win the inaugural race of the revised calendar, the 2020 Austrian Grand Prix after a late Safety Car. However, he collided with Lewis Hamilton while fighting for P2 and his chances disappeared.

In the following seven races, Albon had three Top-5 finishes before achieving the first podium of his career in the 2020 Tuscan Grand Prix at Mugello on the 13th of September.

Alexander Albon driving the Red Bull RB16 on theHungaroring on July 19, 2020 in Budapest

Alexander Albon driving the (23) Scuderia Toro Rosso STR14 Honda on track during practice for the F1 Grand Prix of China at Shanghai International Circuit on April 12, 2019

Jan.6 - Alex Albon's Formula 1 career is not over, according to top Red Bull official Dr Helmut Marko. With Sergio Perez replacing him for 2021, British-born Thai driver Albon is..

Dec.23 - Dr Helmut Marko has defended Red Bull's notorious driver development program - even though outsider Sergio Perez is replacing Alex Albon for 2021. It's only a one-year..

Dec.18 - Red Bull Racing can today confirm that Sergio Perez will join the Team and race alongside Max Verstappen in the 2021 FIA Formula One World Championship. Current driver..

It’s been a difficult year for many Formula 1 drivers, but Alex Albon has had a harder time than most. The British-born Thai driver hasn’t lived up to expectations in the 2020..

Dec.18 - The last two race seats on the 2021 Formula 1 grid look set to be confirmed with just days to spare before Christmas. After a full year of speculation, Mercedes hinted on..

Father not sure who Verstappen's 2021 teammate will be

Dec.15 - Jos Verstappen says he doesn't know who his son Max's teammate will be at Red Bull in 2021. It is a sure sign that the energy drink outfit is actually yet to decide..

Red Bull poised to complete teams' lineups for next season

Dec.14 - Red Bull is now poised to complete the driver lineups of its two Formula 1 teams. Even though the news is not official, Daniil Kvyat freely admits that he is losing his..

Marko admits that Perez is on Red Bull's radar

Dec.13 - A 2021 Red Bull contract for Sergio Perez could be announced "next week". That is the news from Niki Juusela, a respected correspondent for the Finnish broadcaster C..

Perez had tequila with Red Bull bosses after Bahrain

Dec.12 - Sergio Perez shared a tequila with Red Bull bosses after his breakthrough Sakhir GP win - but he still isn't sure if he will race for the team in 2021. Red Bull is..

Dec.10 - Red Bull has denied that it will rush to snap up Sergio Perez after the out-of-work Mexican secured his first Formula 1 race win in Bahrain last Sunday. Like Nico..