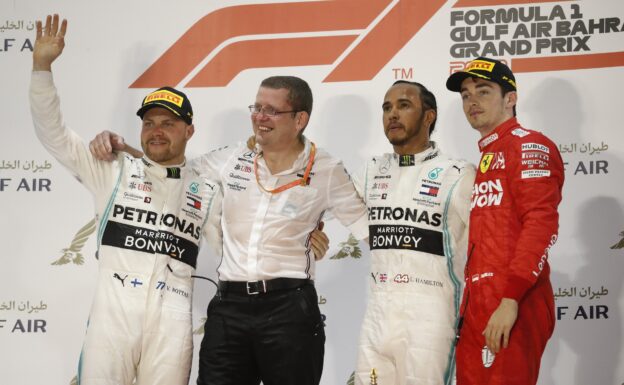 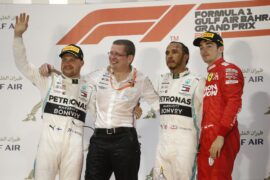 Lewis Hamilton won the 15th Bahrain Formula 1 Grand Prix today. The British driver scored his 74th Formula 1 race win in the Mercedes W10, He scored the 89th F1 victory for Mercedes. It was the 3rd time he won in Bahrain.

The start of the 2019 Bahrain was clean. Youngest pole sitter ever for Ferrari, Leclerc had a poor start and was passed right away by his teammate Vettel. He was passed by Bottas in the Mercedes.

Lance Stroll in the Racing Point touched wheels with Roman Grosjean and both had puncture. A few laps later Max Verstappen and Carlos Sainz collided with their front wheels in turn 4. Sainz came out bad as the collision caused a puncture on his right front. The collision was investigated by the stewards, but no driver was penalised.

In lap 2 Leclerc passed Bottas again for P2 and could ride in clean air towards his team mate again. At the end of the main straight Leclerc passed Vettel for the lead in lap 4.

Verstappen pitted as first of the top 5 drivers in lap 12 to get rid of the Soft tyres end go to the end on the Medium tyres.. He returned to the track on P8. A few moments later Daniil Kvyat spun of the track while Valtteri Bottas did his pit stop to switch from Soft to Medium tyres. Kvyat got hit by Alfa Romeo driver Antonio Giovinazzi, but didn't receive a penalty.

In Lap 14 the race leader Charles Leclerc pitted for Medium tyres and returned to the track as 3rd. Hamilton also pitted, but choose for Soft instead of Medium tyres to do a undercut on Vettel's P2. He will have a 2 stop strategy. When Vettel pitted he came out the pits behind Hamilton on P3.

Around lap 18 Roman Grosjean was the first driver to retire the 2019 Bahrain F1 GP. The collision with Stroll in turn 2 was obviously the reason he had to retire. Hamilton's tyre strategy isn't working and Vettel closed the gap to Hamilton to DRS him on the main straight and the second straight to pass him for P2.

Daniel Ricciardo was the last driver to do his pitstop and pitted in lap 25 of the race. He drove on P2 a while in the early stage of the race. He pit stop dropped back to P13 after his stop. 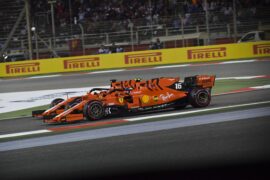 Sebastian Vettel gets passed by Charles Leclerc, Ferrari SF90 during the 2019 Bahrain GP

Half way the race Leclerc had an 8 second lead in the Ferrari on his team mate Vettel and collected the fastest lap of the race. In lap 33 Verstappen did his 2nd pitstop to again get fresh new Medium tyres and return to the track as 6th. Hamilton pitted in lap 35 to go to Medium tyres and came back on the tarmac as 4th. One lap later Vettel also gone in the pit to get fresh medium tyres. He return to the circut as 3rd and lost one place to Bottas. A lap after that race Leader Leclerc came in to get a fresh set of medium tyres.

Lewis Hamilton and Sebastian Vettel had a great fight for a few laps for P2. The English driver had a great pass on Vettel in turn 4 for P2, where Vettel tried to defend to go early on the gas. Because of his spin he had huge vibrations which even caused his front wing to break. He had to come in for tyres and a new nose. Because of his pitstop he  dropped 5 places to P8.

10 laps before the end Charles Leclerc had a power unit problem. His MGU-K failed to recharge his battery. Lewis Hamilton who still was driving on P2 after his hard fight with Vettel passed him to drive to the finish as race leader.

In lap 55 both Renault drivers Daniel Ricciardo and Nico Hulkenberg had a power unit related problem and retired in turn 1. The incident caused a safety car period. In this safety car period McLaren driver Carlos Sainz also retired and parked his MCL34 in the pit garage.

The race finished behind the safety car. 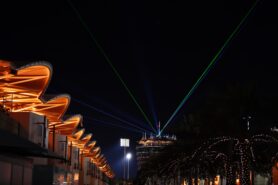 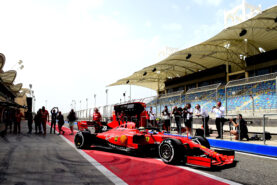