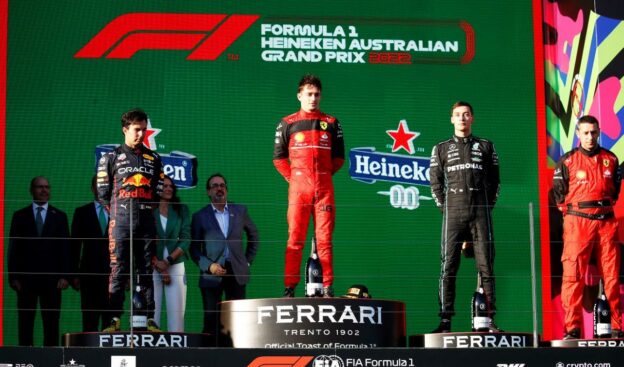 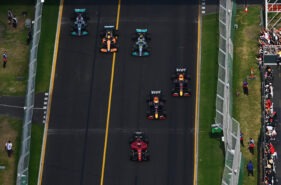 Start of the F1 Grand Prix of Australia at Melbourne Grand Prix Circuit on April 10, 2022 in Melbourne, Australia. (Photo by Clive Mason/Getty Images)

Charles Leclerc scored his 4th race win today. The Monegasque driver won the 36th Australian F1 GP. It was his second race win of the 2022 season. The Ferrari driver started from pole. It was the 240th race win for Ferrari.

A crowd of 128.000 fans saw all cars start the formation lap. The top eight started the race on the medium tyres. Ferrari driver Carlos Sainz and Alpine driver Fernando Alonso started on the hard tyre.

All cars got away clean and Lewis Hamilton and both Mercedes cars had a great start. Lewis Hamilton moved from P5 to P3 and overtook the Red Bull of Sergio Perez for P3. George Russell jumped from P6 to P5. Lando Norris lost two places in the McLaren and now was sixth.

In the second lap a virtual safety car was deployed to recover the Ferrari of Carlos Sainz out of the gravel trap at turn 10. The Ferrari driver was trying to pass Magnussen at turn 9 but lost control and spun off. Two laps later the safety car drove out to slow down the cars even more and work safely. Aston Martin driver Lance Stroll already did two pitstops during the safety car period, to try and make it to the end. The race was back on in lap 7.

In lap ten Perez had already lost 4 seconds behind Hamilton and passed the Mercedes at turn 3. One lap later went off at turn 11 in the Aston Martin, but was able to drive through the gravel trap to continue the race. He only had driven 26 laps around the "new" track.

Verstappen told his team in lap 12 his left front tyre was graining. The Red Bull driver already lost 4 seconds. Both McLarens were chasing both Mercedes cars now with Norris only 0.6s behind Russell.

Williams driver Nicholas Latifi pitted to switch from medium to hard tyres  in lap 14. Mick Schumacher did the same one lap later with a pitstop that took the Haas team 3.5 sec.

Alfa Romeo driver Valtteri Bottas was overtaking Tsunoda to get P11 from the Japanese AlphaTauri driver. A few moments later Magnussen also did try to get pass Tsunoda at turn 9 and almost went off the identical way Sainz earlier did. 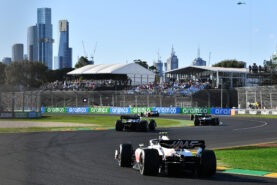 Alpine driver Esteban Ocon who was driving around on P14 pitted in lap 18 and returned to the track on P17 with a new set of hard compound tyres. Verstappen did the same to get rid of his worn medium tyres. His pitstop took 2.9s. He lost several places and came back on the tarmac on P7 in front of AlphaTauri driver Pierre Gasly and just managed to get his tyres up to temperature and drive away. Hamilton now was chasing down Perez for P2 and came very close with the help of the three DRS zones. Perez pitted in lap 21 for a fresh set of hard tyres and came back on P9

Perez' teammate Verstappen drove the quickest lap (1:23.129 min) of the race on his new tyres and was flying to get close down the gap toward Leclerc for the lead.

Leclerc pitted in lap 23 and stayed race leader. It took the Ferrari pit crew  2.7s. Verstappen was 9 sec behind him before the pitstops. The Dutch man now was only 6 sec. behind the Ferrari driver. Hamilton also did a pitstop and came back on P5.

In lap 24 another safety car was deployed to clean up the track after Vettel lost control of the number 5 Aston Martin in turn 4. The Aston Martin again got damaged and Vettel had to retire the car. Russell could make  good advantage of the safety car period and did his pitstop and passed his teammate Hamilton for P3 with it.

The restart after the safety car in lap 27 generated some great racing. Verstappen came very close to Leclerc, but could not overtake the Monegasque. The top 10 now was: LEC, VER, RUS, ALO, PER, HAM, MAG, NOR, RIC, ALB. It took Perez a few laps to overtake Alonso for P4. The Mexican driver used the second DRS zone to pass the Alpine of the oldest driver on the grid. One lap later Hamilton did the same and Alonso who had not pitted yet was no falling back to P6.

Verstappen already lost three seconds in lap 31 and Leclerc was now clocking fastest lap after fastest lap. He extended his lead to 4.5 seconds. Perez who was driving on P4 did manage to close down the gap towards Russell and overtook the Mercedes driver in lap 36 at turn 11 and was now back on P3.

Verstappen retired the Red Bull in lap 39 with an engine problem. He was asked by the team to stop Red Bull after he told his team he smelled something that wasn't right. The Dutchman pulled over and the Red Bull even was on fire. A virtual safety car was used to quickly recover the Red Bull. Alonso and Magnussen used this great opportunity to do their first pitstop. The VSC ended In lap 39 and Alonso now was on P13 with fresh tyres behind the Haas of Mick Schumacher.

Stroll who now was driving on a very good P9 received a 5 sec. penalty for weaving on the straights. It took Gasly who was on behind him a lot of laps before he could pass the Canadian driver. Bottas who now was behind the Aston Martin driver overtook him one lap later. Behind them Alonso was having a hard time on the medium tyres and dropped back from P12 to P15 and pitted in lap 55 for a new set of mediums and now even was last.

Albon had not made the mandatory two pitstops on dry tyres. The Williams driver did his second stop in the very last lap and scored his first point for the Williams team this season. 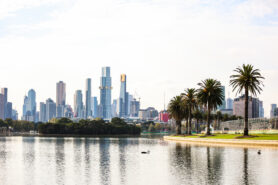 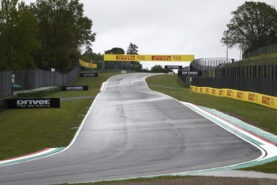