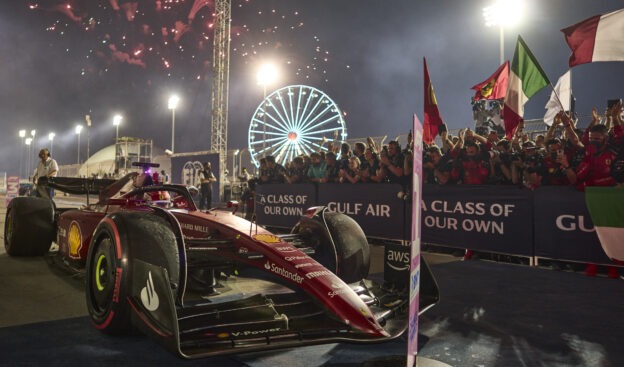 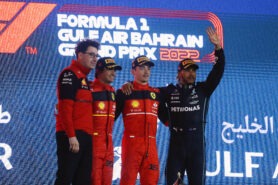 Charles Leclerc won his 3rd F1 race during the 2022 Bahrain F1 GP today. The Ferrari driver started from pole and won the 18th race on the Bahrain International circuit for the first time. It was the 239th victory for the Ferrari team.

The start of the race was quite hectic. All cars got away clean, Lewis Hamilton gained a place in the Mercedes to P4. On the other hand his former teammate Valtteri Bottas in the Alfa Romeo lost 8 paces. The top 3 kept their grid positions. In the first lap Alpine driver Esteban Ocon collided with the Haas of MIck Schumacher. The Haas driver spun but was able to continue undamaged. Ocon received a 5 sec. penalty for causing a collision.

Hamilton was the first that pitted for new hard tyres. His pitstop took 3.4s. When he got back on track he almost couldn't make turn 1 because of the cold tyres that are only heated up to 70 degrees this season. In lap 15 Max Verstappen and Carlos Sainz pitted for a new set op mediums. Charles Leclerc was still leading the race in the Ferrari and had a 10 second lead on Sergio Perez in the Red Bull. 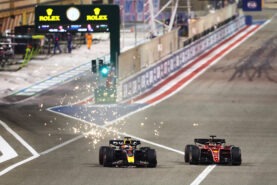 The next lap Leclerc pitted and came out just in front of Verstappen also on a set new set of softs. Verstappen tried to pass Leclerc and on the main straight he overtook the Monegasque driver for the lead. The next straight Leclerc was able to overtook Verstappen back again and the next lap the story was exactly the same and the battle for the lead became epic.

Halfway the race Hamilton already pitted to get rid off the hard tyres as he already was over 25 seconds behind the leaders. He now switched to medium tyres to try and pick up his pace. Russell driving behind him on P6 before the pitstop.

In lap 31 Verstappen pitted for a new set of medium tyres to get by Leclerc. One lap later Leclerc did the same to try to stay in front. It didn't get as close as the first pitstop when Leclerc returned to the track and Verstappen was furious on the radio towards his team, because they probably told him to do an easy out lap. He told his team he could be easily ahead of Leclerc if he didn't had hold back.

Kevin Magnussen was driving around P7 in lap 40 which is an amazing achievement for the team that had to do a last minute change of drivers after Russia attacked Ukraine earlier this month.

At the end of lap 50 the safety car period ended and the race got back on. At the restart Sainz almost passed Verstappen for P2 on the main straight. Schumacher who was on P10 lost his position to Yuki Tsunoda and Fernando Alonso.

In lap 55 Verstappen had to retire the Red Bull and drove to the pit box. in the very last lap Perez had an engine problem and retired in the first corner and gave his podium to Hamilton who finished 3rd. 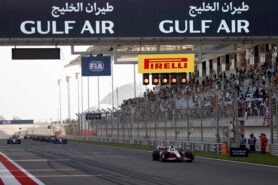 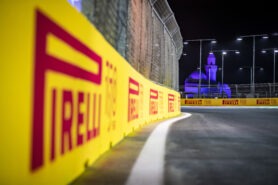