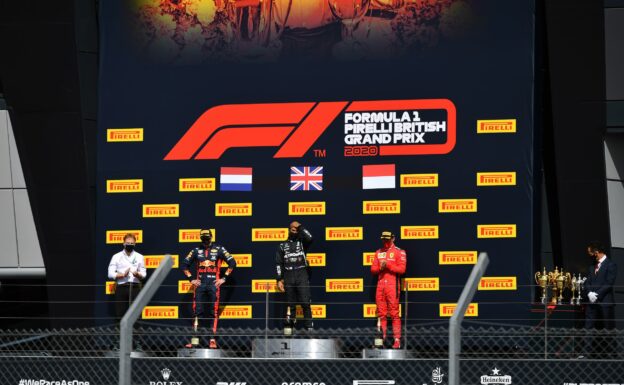 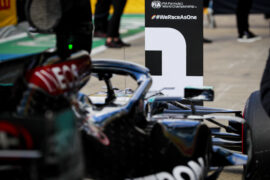 Lewis Hamilton could just win the 2020 British F1 GP today. He started from pole and won his 87th F1 race at Silverstone. It was the 105th victory for Mercedes and Hamilton's second 3rd win in a row of the 2020 season.

Nico Hulkenberg who was called on Wednesday to replace Sergio Perez, who was tested positive on COVID-19, had a rough moment when his car could not be fixed on time before the start of the race. The Racing Point had a power unit problem.

The start was clean all cars got away without incidents. There was some pushing and shoving and on the end of the first lap Alexander Albon collided with the Haas of Kevin Magnussen. The Red Bull driver hit the right rear tyre of Magnussen with his left front tyre. The Danish driver crashed into to barrier and had to retire. Albon was able to go on. The crash caused a safety car period and Albon received a 5 seconds time penalty.

A few lap after the safety car period ended, the Thai driver went in on lap 6 to switch from his medium tyres to new hard compound tyres.

Daniil Kvyat who started from P19 in the AlphaTauri spun off on lap 13 in Becketts corner because his rear right tyre blew-up. Kvyat had made up 7 places and drive on P12 behind his team mate Pierre Gasly. He hit the barrier head-on and the AT01 was totally demolished by the collision. Fortunately the current safety standards are very high in F1 and the Russian driver could walk away disappointed on his own. 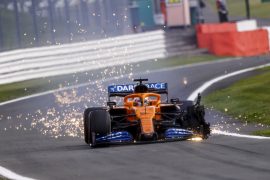 Carlos Sainz, McLaren MCL35, heads into the pits with a front puncture

Almost everybody rushed into the pits to get as set of fresh hard tyres. Only Romain Grosjean was the only driver who stayed out and moved up to P5 in the Haas At the end of lap 18 the race was on again.

In lap 50 disaster struck for Valtteri Bottas when he got a left front puncture. He limped back to the pits to return to the track on P12. One lap later Carlos Sainz and Lewis Hamilton had the same problem. Hamilton even finished the race as race leader with a flat tyre! 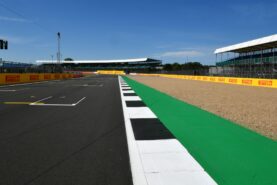 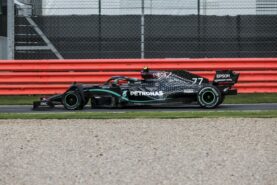