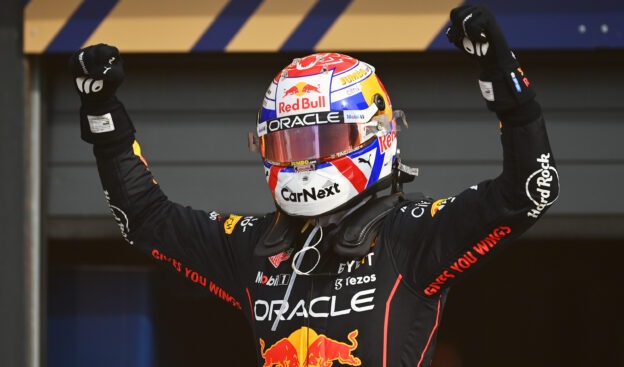 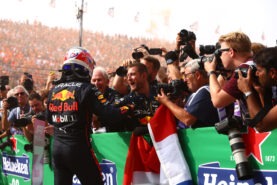 Max Verstappen won his 30th F1 race at the 2022 Dutch F1 GP today. The Red Bull driver started from pole position and won on the Zandvoort circuit for the second time in a row. It was his 10th win and the 4th consecutive victory of the season. The Red Bull Racing team scored their 86th race win.

The top three started on softs, while both Mercedes drivers started on medium tyres. The start of the race was clean. Mercedes driver Lewis Hamilton dived into the Tarzan corner next to Ferrari driver Carlos Sainz to get his P3. Both got tangled a bit and had contact with their tyres. Hamilton had to slow down and even almost lost P4 to McLaren driver Lando Norris for few laps. 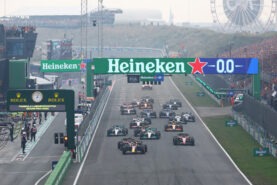 In lap two Kevin Magnussen went wide in turn 2 and hit the barrier, but was able to continue with the Haas as last. Max Verstappen slowly extended his lead all the way to the first pitstops. In lap 15 Carlos Sainz did his first pitstop to from softs to the medium tyres. The Ferrari pitstop went horribly wrong, because the left rear tyre wasn't there on time. The stop took 12.7 sec and Sainz fell back from P3 to P13. Meanwhile Red Bull driver Sergio Pérez also pitted and drove over one of the wheel gun of the Ferrari team and could continue undamaged.

Both German drivers Mick Schumacher in the Haas and Sebastian Vettel in the Aston Martin had a great fight on track and where side by side for several corners. Schumacher did get passed Vettel in the end.

Both Mercedes driver were on a one stop and that strategy looked like the quicker strategy until AlphaTauri Yuki Tsunoda had a strange technical problem that caused him to stop on the track in lap 47 and caused a virtual safety car period.

Verstappen, Hamilton, Russell all pitted to get fresh rubber. Verstappen got a set of hard tyres and both Mercedes drivers choose for the medium compound tyres. 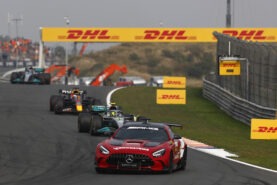 In lap 55 the Ferrari engine in the back of the Alfa Romeo of Valtteri Bottas stopped doing what it was designed for. Bottas had to park his car at the end of the main straight just before turn 1. A safety car period was needed to recover the Alfa Romeo. Verstappen Russell and Leclerc pitted for a fresh set of soft tyres. Hamilton didn't stop because he was in the lead of the race, which cost him dearly again.

Right after the restart he got passed by Verstappen and even his team mate Russell who made the call to get a fresh set of soft tyres also passed Hamilton on the main straight. Leclerc also was much quicker on the softs and pushed the seven times world champion of the podium to P4.

The Dutch crowd went wild when their hero Max Verstappen crossed the finish line to score his fourth consecutive F1 win this season. 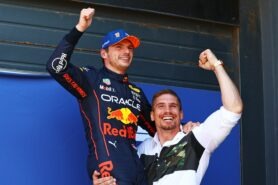 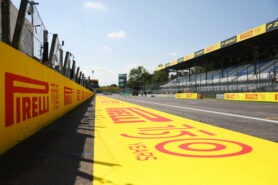