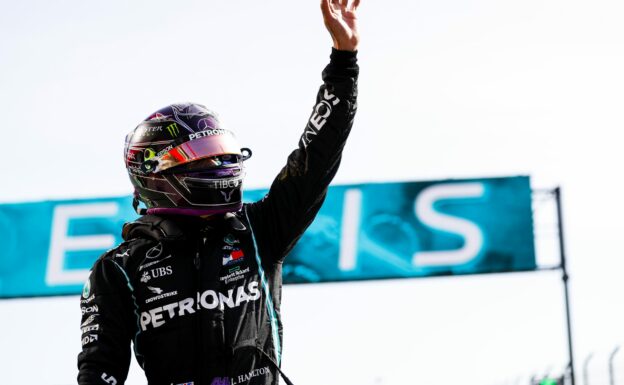 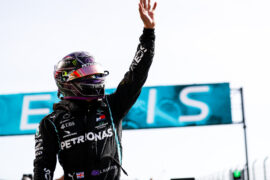 Lewis Hamilton won his 92nd F1 race at the 2020 Portuguese F1 GP today. He started from pole position and won the race on the Algarve circuit for the first time. It was his 8th race win of the 2020 F1 season and the 112th victory for the Mercedes team.

The start of the first ever Formula 1 race on the Portimao circuit was quite different than we have seen before in the 2020 F1 season. In turn 1 Valtteri Bottas had lost P2 to Max Verstappen but Bottas took back P2 from Verstappen in turn 2. The following corners Verstappen and Sergio Perez collided, both could go on. Verstappen did lost a few places and Perez drove towards the pits to switch from soft to medium tyres. Carlos Sainz had a great first lap in the McLaren and even took the lead for 5 laps.

Kimi Raikkonen who started from P16 had passed 10 cars in the first lap and drove around on P6. He got passed by Charles Leclerc in the Ferrari in lap 8. In lap 6 Sainz who was still driving in the lead got overtaken by Bottas, one lap later he lost P2 to Lewis Hamilton and again one lap later the Spanish driver lost P3 to Verstappen.

In lap 14 Verstappen was telling his team that his left front tyres was dead. In lap 16 Hamilton also told his team on the radio his left front was getting bad. Pierre Gasly was driving a very strong race in the AlphaTauri. The French driver who started from P9 was having a great pace and was driving on P6.

In lap 19 Hamilton passed Bottas for the lead on the start-finish straight with DRS. In the same lap Lando Norris and Lance Stroll collided in turn 1. Both had to go to the pits for a new frontwing. In lap 21 Sainz told his team on the radio it started to rain again. 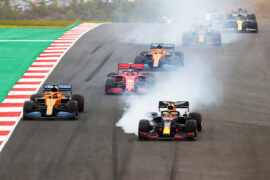 Max Verstappen driving the RB16 locking up during the F1 Grand Prix of Portugal at Autodromo Internacional do Algarve on October 25, 2020 in Portimao, Portugal.

Verstappen pitted for medium tyres in lap 24 and returned to the track as sixth. At that time Stroll got the news he received a 5s penalty for causing a collision with Norris. In lap 31 Stroll received again a 5s penalty because he didn't respect the track limits enough.

Halfway the race in lap 33 Bottas told his team he had a warning on his dash that told him to cool the car. The unique layout of the Algarve track delivered a lot of entertaining battles we didn't saw before this season. Leclerc pitted in lap 36 to switch from medium to hard tyres to try to get onto the podium.

In lap 41 race leader Hamilton did his pitstop to get new hard tyres. He returned to the Portimao track on P2. One lap later his team mate Bottas did the same. Lance Stroll was the first driver to retire his car in this race. In lap 54 he drove into the Racing Point garage. A few moments later Daniil Kvyat received a 5s penalty for exceeding track limits.

In the end of the race a great battle for 5th was evolving between Gasly, Perez and Sainz. 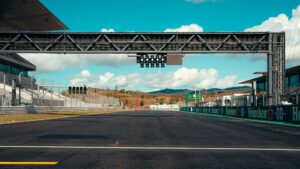 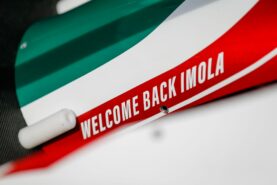