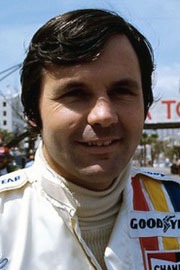 Born on the 2nd of November in Melbourne, Australia, Alan Jones’ racing roots began at a really early age. His father, Stan, was part of Australia’s elite class of drivers in the 1950s, which propelled Alan’s passion for the sport. Although his father was a winner of the non-championship Australian Grand Prix and had a car dealership, Alan’s racing career presented many issues related to economics.

He started off with karting, as many champions do, but it was not until after his mid-20s when he established his racing career in Europe after many sacrifices and working tirelessly.

George Robinson was vital in Jones’ initial phases in racing, as he would provide Vegantune engines for the Australian. In 1972, he competed driving Formula Three cars in different series, without impressive results. His tough mentality and aggressive driving helped him and slowly but surely he improved his craft, all while renting rooms for foreigners and preparing breakfast for them alongside Beverley, his wife at the time.

In 1973, he entered the John Player Formula 3 Series, in which he finished second overall behind the wheel of a Group Racing Developments’ 373. Alan’s father died in 1973 and Jones put the Laurel Wreath from his F3 victory at Silverstone in his father’s coffin. 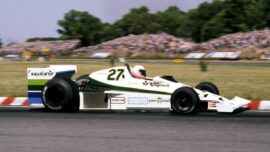 The following year, he competed in the Formula Atlantic with a March 74B, finishing second in the championship. Also in 1974, he went on to race in the F5000 with a Chevron B24. Harry Stiller who was a British Formula Three champion, helped Jones get into Formula 1 in 1975, providing the Australian talent with a Hesketh 308.

Jones’ Formula 1 debut came in the 1975 Spanish Grand Prix. He started the race from 20th and retired on lap three. The race at the Montjuïc circuit is well-remembered for bad reasons, as five persons’ lives were taken away after German Rolf Stommelen crashed and his car went into the crowd.

After four races, the Hesketh car was not available anymore and Jones went on to race for Embassy Racing, Graham Hill’s team. He completed four races with the two-time champion’s team and finished fifth at the Nürburgring in what was his last start of the season.

For 1976, John Surtees came calling and Jones spent the season with the team. The results were not spectacular as Jones scored points in only three races. At the end of the year, Jones and Surtees, who did not get along well, parted ways, although Jones was the only Surtees’ driver to score points during the year.

After missing the first three races of 1977, Shadow offered a seat to Jones after the tragic death of Tom Pryce at South Africa. Jones took the most of the opportunity and went on to take his first Grand Prix win with a triumph in a difficult 1977 Austrian Grand Prix from 14th on the grid. It was Shadow’s only win in their F1 journey.

Jones ended the year flawlessly, with a third place in the 1977 Italian Grand Prix and two fourth places in a row at Canada and Japan. After almost ending up at Ferrari for 1978 (the Italian team signed Gilles Villeneuve instead), AJ signed with Williams, which was not yet a force to be reckoned with in the sport at that time.

He was the only Williams driver in 1978 and delivered the team’s first podium since it was finally established as the Williams we know today (opposed to Frank Williams Racing Cars, which was the original project). Also, he won the Can-Am Challenge Cup in 1978 with Haas-Hall racing.

A good 1978 was followed by a strong season for Jones and Williams thanks to the ground-effect FW07. Now with Clay Regazzoni as his teammate, Jones achieved his first (and the team’s first) Pole Position with a solid drive in the 1979 British Grand Prix. However, a water pump failure prevented him from delivering the team’s first win and it was Regazzoni instead who won the race at Silverstone. 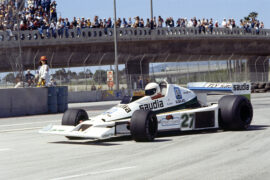 Then, Jones had a streak of three consecutive wins after his great drives at Germany, Austria and the Netherlands. A ninth place in the 1979 Italian Grand Prix ended his winning streak, but he recovered and started from Pole in the last two races of the year, winning the second-to-last GP at Canada. AJ finished third in the 1979 World Drivers’ Championship, but he was hoping for more.

With 1980, the FW07B —which was a development of the car of 1979— came in and Jones made the most of it. Starting the year with victory at Argentina in the inaugural race and following up with two other podiums in the first five starts, Jones was clearly looking for the title. He was two points behind the championship leader René Arnoux after the first five races and he needed consistency to take the trophy home.

After retiring from the next race at Monaco, Jones picked up another gear for the end of the season. He won consecutively in France and Great Britain to take the championship lead from Nelson Piquet, who took it after the Monaco race.

Third in Germany after starting from Pole and second place in Austria continued his run of good results. However, a bad outing in the 1980 Dutch Grand Prix helped Piquet close the gap in the WDC to two points with three races left.

Then, Piquet won at Imola to take the title lead away from the Australian, However, the Brazilian’s quest ended desperately in the 1980 Canadian Grand Prix, where he qualified on Pole and was leading before his car, which was set up mostly for qualifying, had engine failure.

In the then called Circuit Île Notre-Dame —current Circuit Gilles Villeneuve— Jones crossed the line second behind Didier Pironi’s Ligier. However, the Frenchman had jumped the start and was given a 60-second penalty, which made Jones the winner and secured the title for him with one race to spare.

Although a win awarded nine points and Piquet was behind juts eight points heading into the final race, the title was decided in favour of Jones. Due to the scoring system of that year only counting the best five results from the first and last seven races towards the championship, Piquet had no chance. The Brazilian had already scored points in five races in the second half of the year, which meant he would lose two points —fifth place at Austria— if he was able to win the last race and it was not going to be enough against Jones. 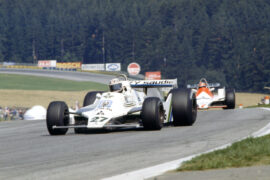 Jones won the last race of the year at Watkins Glen and ended his title-winning season with five wins and ten podiums.

Although he started 1981 with even better results than 1980 in the first few races, his results regressed during the year and he could only finish third in the WDC, behind Piquet and his teammate Carlos Reutemann, with whom Jones had some issues.

Jones informed Frank Williams during the 1981 Italian Grand Prix —where he arrived with a broken finger after a fight with thieves in England— that he was retiring at the end of the year. In the last race, in Las Vegas, Jones dominated on Sunday with a 20-second gap over second-placed Alain Prost.

He competed in the Bathurst 1000 in 1982. Then, he left his farm in Australia and returned to the pinnacle of racing for a race with Arrows. He tried to race with a broken femur, but promises of a big sponsor did not look clear and he did not compete for the team again.

He retired again, but then returned in 1985 with Team Haas. However, in 19 races, his best finishes were fourth in the 1986 Austrian Grand Prix and sixth in the following race, the 1986 Italian Grand Prix.

After retiring from F1 for good, he competed in the 1987 24 Hours of Le Mans with Toyota, but could not finish the race. He kept participating in the Bathurst 1000 as well as other series like the V8 Supercar Championship and the Asia-Pacific Touring Car Championship.

Later he became a media member, working as a commentator during the Australian coverage of Formula 1 and various Australian Motorcycle Grands Prix. Also, he has worked as FIA steward in some races, although he said in 2019 he was “disillusioned” with the sport and might quit.

And so we face the final three in Jonny Williams' list of all-time favourite WilliamsF1 GPs. Flashback to Zandvoort, Holland, 1979, and that glorious summer for Williams Grand..

"Disillusioned" 1980 world champion Alan Jones has indicated he might quit as a Formula 1 steward. The outspoken Australian, who is 72, told speedcafe.com that he may step down so..

F1 with Peter Windsor - Austria2. When Williams were winners

Alan Jones 2019 Beyond the Grid interview

He’s renowned as one of racing’s toughest nuts – a driver who gave his all on the race track and didn’t suffer fools off it. And this week on F1’s official podcast,..

Mar.19 - Red Bull has completely ruled out suggestions it faces losing Daniel Ricciardo at the end of the year. After the similar rumours of 2015, a potential move to Maranello..

Mar.17 - Kimi Raikkonen's manager has admitted 2016 will be a crucial year for the 2007 world champion. Most pundits are predicting that, if Ferrari is able to match Mercedes'..

The meteoric rise to stardom of Australia’s Daniel Ricciardo has stuttered somewhat of late, but anyone harbouring concerns about the 26-year-old’s driving ability need only..

After a low-profile period for F1's official supplier, suddenly "tyres" and "Pirelli" are being talked about again. Following the days of tyre explosions and disintegrations a..

Two former Australian F1 drivers sided with their compatriot Daniel Ricciardo after qualifying in Melbourne. Ricciardo's huge grin is plastered over seemingly every billboard in..