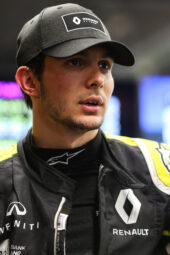 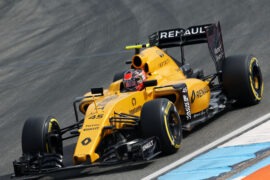 Esteban Ocon started his racing career in 2006 with karting. He ended up on 8th place in the French mini-championship. In 2007 and 2008 he became champion and switched over to the Euro Series until 2011. He won the French KF3 title and scored 2nd place in the European championship.

In 2013 he also made his debut in Formula 3 to take part in the Grand Prix of Macau. In 2014 he raced in the European F3 championship and won it. He won 9 races and had to race against some tough competition like Max Verstappen those days. 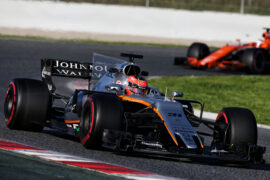 His F1 career started at Lotus in 2014. He took was selected for there young driver program. His first lap times were clocked on the Yas Marina circuit for the Abu Dhabi Grand Prix. He drove 28 laps during free practice. In 2015 he was asked to test for Force India, switched to DTM and then was asked to be become test driver at the Mercedes F1 team.

In 2016 he moved back to Lotus that was bought back by Renault to be their reserve driver in 2016. His first race however was not at Renault, but at Manor. He replaced Rio Haryanto seat at the Belgian Grand Prix and stayed there to drive all races of the season. He didn't score any points, but was able to be faster in the last 2 races than high profiled team mate Pascal Wehrlein.

Financial problems was the end of Manor and Ocon had to look for a new seat to race in 2017. Esteban got a racing seat at Force India to replace Nico Hulkenberg who left the team to race at Renault. Ocon drove a very good first season at Force India. His performance was steady. He retired only once in Brazil, because he got hit by Roman Grosjeans Haas and crashed into the barrier. 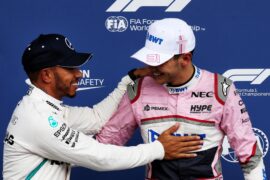 He scored 87 points in 2017 and his best finish was 5th in Mexico and Spain. His best quali was 3rd in Italy, were he finished 6th. A fears battle inside the team was giving the team management a hard time. Sergio Pérez and Ocon crashed in to each other several times, Baku and Spa both drivers had collided several times.

In 2018 he also raced at Force India alongside Sergio Pérez. Both drivers had a hard time beating each other again and collided several times. In Singaprore Perez pushed Ocon in the wall of turn 3 right after the start and had to retire. They threw away a lot of points again.

Ocon's best moment was in Spa when his future in F1 had becaome uncertain, because the Force India team was bought by a consortium led by Lawrence Stroll (father of Lance). Rumours said that Ocon's seat at the now named Racing Point F1 team would go to Lance Stroll the next 2019 season.

Although Ocon qualified 3rd in Belgium, he was ousted by Stroll. His worst moment of 2018 was during the Brazilian GP when he crashed into race leader Max Verstappen. Ocon was trying to unlap himself in lap 44, but hit Verstappen. Both drivers spun and Verstappen lost his lead to Hamilton. Verstappen was very angry after the race and shoved Ocon around.

During the 2019 F1 season Ocon was reserve driver at Mercedes. Rumours sad that he will return on the grid in 2020 at Mercedes to replace Valtteri Bottas and drive alongside Lewis Hamilton.

On the 29th of August Ocon the news got out that he had signed a contract for two years, to drive for Renault next to Daniel Ricciardo.

Ocon's return in the 2020 F1 season was a struggle, as he only scored one Top-5 finish for the team and had difficulties matching his teammate's Daniel Ricciardo's pace.

Oct.28 - Cyril Abiteboul has denied rumours suggesting Renault might oust Esteban Ocon. Rumours in Portimao had claimed the works team is so disappointed with Ocon's performance..

Oct.26 - Esteban Ocon admits it has been a "long process" to get back up to speed in Formula 1. In Portugal, rumours swirled in the paddock that Renault might look to another..

Oct.22 - Formula1.com and French media are confirming reports that Romain Grosjean will leave Haas at the end of the 2020 season. Later today Kevin Magnussen confirmed the news on..

Oct.16 - Esteban Ocon "should not be ashamed" of his performance at Renault so far in 2020. That is the view of his boss Cyril Abiteboul, amid speculation the team might be..

Oct.14 - F1's 2021 driver market is hotting up once again. Red Bull has been supporting the struggling Alex Albon this year, but Dr Helmut Marko is now admitting that Nico..

Abiteboul: Renault will be prepared for Alonso

Sep.23 - The 'party mode' ban did not alter the team hierarchy in Formula 1, according to Renault boss Cyril Abiteboul. The ban came down at Monza, and it had been expected to..

Aug.30 - Renault's 2020 engine is continuing to turn heads. While Dr Helmut Marko claims Red Bull's Honda power is better in the races, he admitted that the Renault unit has "a..