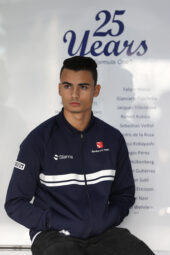 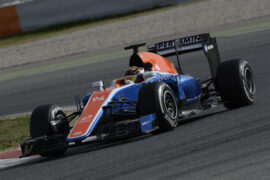 German Pascal Wehrlein completes the 2016 grid, alongside fellow rookie Rio Haryanto, at Manor and will make his F1 debut in Australia.

The 21-year-old is on the books of Mercedes, and is highly-tipped to one day take over from current stars Lewis Hamilton and Nico Rosberg.

But first he must prove himself F1-worthy, after an interesting junior career which has seen him so far avoid GP2 and GP3.

Instead, Wehrlein started his single-seater career in ADAC Formula Masters, where he finished sixth in the championship with one victory and three podiums.

From there, he went into Formula 3 Euro Series where he finished second, before switching across to DTM.

This is where he really made his mark, as two wins and five podiums helped him on the way to become champion last year.

He combined that with his role as Mercedes and Force India test driver, before Manor came calling in 2016. The Manor wasn't very fast and the team had to pullout at the end of the season.

In 2017 Wehrlein was driving for Sauber. He ended up as 17th in the drivers championship with the worst car of the grid. Although he scored all 5 valuable points for the team from Switzerland, he wasn't offered a seat for the 2018 season. Pay driver Marcus Ericsson was given the race seat.

Also the fact that Ferrari was buying into the team to become title sponsor with the Alfa Romeo name was not good for his F1 career. Ferrari was not in the mood to educate a driver with a Mercedes contract.

In 2018 it was announced that Wehrlein broke up with Mercedes to get a change on the Toro Rosso seat. Whether or not we will see the very talented driver back in the future is unclear.

Pascal Wehrlein appears to have withdrawn his support for a potential new Formula 1 team. Even amid the corona crisis, a prospective new team called Panthera Team Asia that is set..

Pascal Wehrlein will continue to spearhead Ferrari's F1 simulator program. "We have very experienced drivers in the simulator for next year," team boss Mattia Binotto told the..

Pascal Wehrlein says he does not want to return to Formula 1 in order to race at the back. The German lost his race seat after stints at Manor and Sauber, and he now races in..

Pascal Wehrlein is not getting too excited about the prospect of a return to Formula 1. The former Sauber and Manor driver has been closely linked with a potential new team for..

Pascal Wehrlein says he "definitely" is not angling to return to formula one with a back of the grid team. The former Manor and Sauber driver now races in Formula E, but he has..

Vettel not planning to retire yet

Sebastian Vettel says he has no plans to retire. At the end of last year, the German was criticised for making mistakes that contributed to Ferrari not winning the world..

Four drivers will work in the Scuderia Ferrari Mission Winnow simulator during the 2019 season, thus contributing, alongside the race drivers, to the development of the car. They..

Pascal Wehrlein says his countryman Sebastian Vettel deserves to win the 2019 world championship. Ferrari has announced that German Wehrlein, who also drives in Formula E, will be..

Pascal Wehrlein has admitted to having "talks" with Ferrari. Reports suggest the former Manor and Sauber driver, who recently split with Mercedes and is now a Formula E driver,..

Pascal Wehrlein will be Ferrari's new test driver for 2019, according to international media reports. L'Equipe says the former Manor and Sauber driver, who recently parted with..