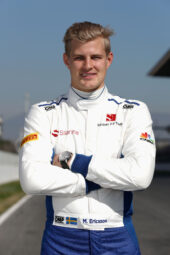 It was a surprise when Sauber announced that they had signed Marcus Ericsson for the 2015 season, after an underwhelming debut year.

The Swede had a rough deal at Caterham but he struggled to make an impression despite their widely publicised problems.

He now joins another team in financial difficulties in Sauber, and there is little doubt that Ericsson’s financial backers influenced the team’s decision.

The 24-year-old will be the team’s senior driver alongside Felipe Nasr, so he will have to impress and show speed many believe is above him if he is to remain in the sport for much longer than 2015.

Prior to F1, Ericsson had a steady but unspectacular racing, and he hasn't won a championship since the 2009 Japanese Formula Three title.

In several seasons of GP2, he consistently improved each year and he progressed from back-marker to podium achiever in five years.

Ericsson has had experience in F1 before. He competed in the Young Drivers Test in 2009 and received positive feedback from Ross Brawn, who said that he showed exceptional maturity.

Ericsson was signed to be Kamui Kobayashi’s team-mate at Caterham in 2014, but the car was riddled with problems and was often described as difficult to drive.

Kobayashi, a more experienced driver, dominated the Swede over the course of the season, but it was Ericsson’s performance in relation to Andre Lotterer that surprised many and dented his reputation.

Lotterer was drafted in for Kobayashi in Belgium to help raise funds, and he drover quicker than Ericsson all weekend.

The 2014 season ended badly for the Swede after Caterham’s financial problems worsened and they entered administration with three races to go. Sauber have given him an F1 lifeline, and he has to take it.

In 2015 Marcus got a seat at Sauber and became teammate of Brazilian Felipe Nasr. He scored 9 points, 18 points less then his Nasr, His best performance was an 8th place finish in the first race of the season in Melbourne. Both driver also competed in the 2016 season. In that season Ericsson didn't score any points and 11th was his best classification. Nasr scored the only 2 points for Sauber that season, but was not driving the 2017 Sauber, while Ericsson kept his seat. 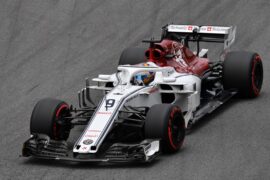 The 2017 season also was without any points. His best place finish was 11th in Spain and Azerbaijan. Again his teammate Pascal Wehrlein was the driver that scored the only 5 points for the team, but wasn't given a seat for the 2018 season. Again Marcus Ericsson survived and was "hired" to drive the 2018 Alfa Romeo Sauber alongside highly rated rookie Charles Leclerc.

Ericsson's 2018 season was lot better. The Sauber also was a lot better because the Ferrari power unit was upgraded to the same version as the Ferrari team used that season. The season before 2018 Sauber always received the less powerful power unit of the season before. He scored 9 points in total and drove one of his best seasons of his career. His teammate was the highly rated 20 year old rookie Chales Leclerc. At first Ericsson could beat Leclerc with his 4 years F1 experience, but after 4 races Leclerc got used to his car and scored a 6th place in the always chaotic Azerbaijan GP. Leclerc scored 30 points more than Ericsson and in September 2018 it became clear that his F1 career would end at the end of the season. He will be replaced by Antonio Giovinazzi for 2019.

Sep.6 - F1 should look to the Indy 500 in order to solve the problem with qualifying at Monza. That is the view of former F1 driver turned Indycar driver Marcus Ericsson, who..

Marcus Ericsson looks set to take another step away from the Formula 1 paddock in 2020. This year, the Swede split his time between a full-time Indycar race seat and a reserve..

Kimi Raikkonen has admitted he may need to sit out the Belgian GP. When Marcus Ericsson pulled out of his latest Indycar race to be on standby for Alfa Romeo at Spa, rumours began..

Ericsson in no hurry for F1 race return

Marcus Ericsson says he is in no hurry to return to the Formula 1 grid. The Swede lost his Sauber race seat at the end of last year, but retained his connection with the team by..

Marcus Ericsson says the "real races" occur not in Formula 1, but in Indycar. The Swede, who lost his Sauber seat at the end of last year, is still an Alfa Romeo reserve driver..

Marcus Ericsson is a good example of how Formula 1 must improve. That is the view of McLaren driver Carlos Sainz, as the new rules for 2021 begin to shape up this weekend in..

Marcus Ericsson is disappointed F1's driver weight rule change arrived a year late for him. The Swede, whose 2018 teammate Charles Leclerc progressed from Sauber to Ferrari for..

Marcus Ericsson has departed F1 by saying the category is "a bit artificial". The Swede drove in F1 for Caterham and Sauber, but he has lost his race seat for 2019 and is..

﻿ Here is a video of Marcus Ericsson in his Sauber making incredible barrel rolls at the Italian Grand Prix.

Sauber driver Marcus Ericsson is switching to Indycar for 2019. The Swede, who debuted in 2014 for Caterham, has lost his race seat with Sauber despite being linked with the Swiss..