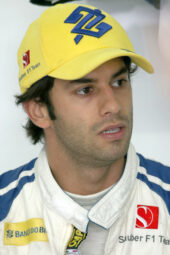 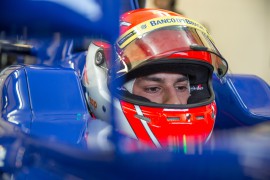 Felipe Nasr looks at data during winter testing in 2015.

Felipe Nasr's name may take some getting used to, as it sounds so much like his compatriot Felipe Massa, but his debut season hinted that he could around for a while.

Nasr is the latest in a long line of Brazilians to enter F1, and if he is as good as the hype around him suggests then expect him to be here for some time.

Furthermore, it is rare that Williams hire bad drivers, so it is in recognition of Nasr’s talent that they signed him to be their reserve driver in 2014.

He also raced in F1 feeder series GP2 that season, and he won four races on his way to a third placed finish in the championship. Those wins, his first in any form of racing since 2011, were imperative to proving to Sauber he is up to the task in F1.

Nasr moved to single seaters in 2009, and gained immediate success with two poles and win in his opening two races in Formula BMW. Four more wins followed as he won the championship.

In 2011 he moved to British Formula Three, where he piped future F1 driver Kevin Magnussen to the title before he moved to GP2. 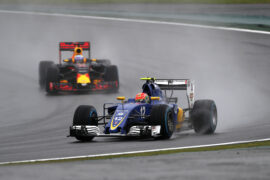 Nasr showed consistency throughout his GP2 career, and he will need to replicate that in order to impress with Sauber.

As per usual, the car the Swiss team produced was solid. It started promisingly, with points in Australia, China and Monaco, but other teams quickly moved past.

the 2016 season brought more of the same, so the pressure was on Nasr to show he deserved more. But The financial situation of Sauber wasn't in favour of Nasr. The pace of the Sauber C36 was poor and Nasr wasn't able to show his speed. Except for his home grand prix in Brazil. In the extreme wet conditions he scored 2 very valuable points for Sauber.

Sep.27 - Former Sauber driver Felipe Nasr says he wants to get back to racing next year. The Brazilian contested two seasons with the Swiss team until the end of last year, when..

Apr.27 - Felipe Nasr says he is working on a potential return to formula one for 2018. With strong backing from Banco do Brasil, the Brazilian raced for Sauber in 2015 and 2016..

Dec.28 - Felipe Nasr has admitted it is possible he will be left without a F1 seat for 2017. And if that happens, unless Felipe Massa returns from retirement, the sport will be..

Dec.12 - Felipe Nasr says Nico Rosberg's shock decision to retire improves his chances of staying in F1 next year. Until Rosberg's shock news, the Brazilian looked set to lose his..

Dec.7 - Felipe Nasr has indicated he has the patience to wait for clarity regarding his future in F1. Until mere days ago, the Brazilian looked set to lose his place at Sauber for..

Dec.1 - Monisha Kaltenborn says Sauber would like to complete its 2017 driver lineup "as soon as possible". The Swiss team's chief headed into the last two races of this season..

Nov.25 - Felipe Nasr's chances of staying in F1 next year have nose-dived. Amid the economic situation in Brazil, the Sauber driver's sponsor, Banco do Brasil, has announced its..

Nov.21 - Felipe Nasr's future remained uncertain on Monday, as Sauber extended its deal with Marcus Ericsson into 2017. "The second driver ... will be announced in due course,"..

Nov.17 - Felipe Nasr's father has played down claims the Brazilian may have hurt rather than helped his chances of keeping the Sauber seat in 2017. By passing Manor for tenth in..

Nov.15 - Bernie Ecclestone has admitted he is not sure if F1 will have a Brazilian driver on the grid next year. It is reported that, to safeguard the important Brazilian..