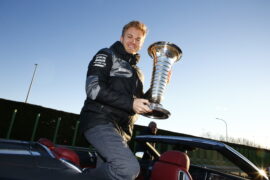 See all 2016 F1 Championship scores for each race, driver and team. Here you can find all F1 results since 1950.

The 2016 season did not present many technical changes from the car’s side, though it did bring various teams and drivers changes, including the return of Renault as a works team after four years.

Renault signed 2014 GP2 champion Jolyn Palmer to partner the McLaren-departing Kevin Magnussen instead of the previous Lotus duo of Romain Grosjean (now going to the newly-formed Haas team) and Pastor Maldonado, who suffered after his sponsors were not able to match contract obligations.

At Red Bull, Daniel Ricciardo and Daniil Kvyat started the year, but the Russian was demoted to Toro Rosso in favor of Max Verstappen ahead of the fifth round at Spain. The Dutchman ultimately won his first race for Red Bull.

The 2016 season did not present many technical changes from the car’s side, though it did bring various teams and drivers changes, including the return of Renault as a works team after four years.

Renault signed 2014 GP2 champion Jolyn Palmer to partner the McLaren-departing Kevin Magnussen instead of the previous Lotus duo of Romain Grosjean (now going to the newly-formed Haas team) and Pastor Maldonado, who suffered after his sponsors were not able to match contract obligations.

At Red Bull, Daniel Ricciardo and Daniil Kvyat started the year, but the Russian was demoted to Toro Rosso in favor of Max Verstappen ahead of the fifth round at Spain. The Dutchman ultimately won his first race for Red Bull.

Mercedes and Ferrari maintained their driver lineups, while the Maranello-based team was expected to compete closely with the defending champions after their 2015 resurgence. Lewis Hamilton and Nico Rosberg were expected to be again in the championship mix, but ultimately the pecking order had Mercedes well in front of the rest, which made the WDC a battle of only two cars.

Mercedes’ German driver got off to a great start of the year. Having won the last three races of 2015 after Hamilton had sealed his third championship, Rosberg won at Australia after Ferrari made a strategic mistake with Sebastian Vettel, who was leading before a red flag caused by a heavy accident between McLaren’s Fernando Alonso and the returning Esteban Gutiérrez (Haas). It was a Mercedes 1-2 in the first race, with Pole-sitter Hamilton recovering to P2 after a bad start and having to go out of the track at Turn 1 to avoid Rosberg’s car.

In the second race, at Bahrain, Hamilton started from Pole Position but was spun round in the first corner by Williams’ Valtteri Bottas, giving Rosberg an easy run to his fifth straight glory.

Hamilton started last in China due to an engine failure in qualifying as Rosberg won from Pole Position. The Englishman’s strategy was weird in the race and he only finished seventh. At Russia, Q3 turbo failure for Hamilton meant Rosberg got Pole and the British racer had to settle with tenth place. The start of the race was chaotic, with Kvyat taking Vettel out just a race after Vettel had called him a “torpedo” in the cooldown room before the Chinese GP podium. The crash ultimately was a factor mentioned by Red Bull when demoting the Russian back to STR.

Spanish disaster for the Silver Arrows and Verstappen’s rise

Now 43 points behind Rosberg, Hamilton qualified on Pole at Spain, but the Mercedes pair collided on lap 1 when Hamilton, who lost his lead at the start, tried to overtake Rosberg on the inside of Turn 4. Rosberg closed his line after the Englishman already had a wheel on the side of his car and it was too late to back out of the move. Hamilton avoided Rosberg and went to the grass, where his car lost control and the two crashed out of the race.

The Mercedes’ clash was highly controversial, with Hamilton saying in the press conference prior to the finale at Abu Dhabi that he would write a book in many years to explain what was said afterwards.

In Spain, it was Verstappen’s day. The young Dutchman took advantage of a one-stop strategy opposed to his teammate’s two-stop to win the race. Ricciardo led most of the race, but an unexpected second pitstop on lap 43 ultimately lost him the chance to win.

Verstappen became the youngest driver to win a Grand Prix and the youngest to achieve a podium at 18 years and 228 days.

Red Bull started on Pole Position in the next race, at Monaco, but a wet race and a horrible pitstop were terrible for the Australian on Sunday. Hamilton, who made a great stint with wet tyres on the drying track, saved a pitstop and emerged victorious after Ricciardo’s trouble. The Englishman suffered to maintain his place after Ricciardo came out of the pits on fresh tyres, but ultimately took the 44th victory of his career.

Sergio Pérez finished third at Monaco for Force India, while Rosberg’s lead was cut to 24 points after a lowly seventh place. Rosberg even led Hamilton through on the early stages as he could not find pace on the wet track.

Hamilton won five of the next six races, with Rosberg winning the first-ever race at Baku after Hamilton crashed in Q3. At the end of the first half, Hamilton was holding a 19-point lead over Rosberg, but he was set to suffer a grid penalty at Belgium for exceeding Power Unit elements. The pair had collided again while fighting for the lead at Austria, in the final lap, with Rosberg crashing into Hamilton and damaging his own car, while Hamilton won the race.

Rosberg started the second half with three straight wins, taking advantage of Hamilton’s grid penalty at Spa, where Mercedes also made strategic errors with the recovering Hamilton, who had an extra pitstop and finished third behind Ricciardo. Hamilton’s bad start at Monza gave Rosberg a comfortable win, while a perfect weekend for Rosberg in Singapore (and holding Ricciardo behind in the end) meant the German recovered the championship lead.

At Malaysia, Hamilton started from Pole and Rosberg almost got taken out at the first corner by an out-of-control Vettel. On lap 41, Hamilton’s comfortable lead disappeared after his car let him down once again due to an engine failure. Ricciardo led a Red Bull 1-2 after a thrilling battle with Verstappen and Rosberg came third to increase his lead to 22 points with five races left.

Rosberg outqualified Hamilton at Suzuka for the third straight year, and Hamilton’s grid spot being wet for the start of the race further damaged the British driver’s chances. Rosberg dominated at Japan and made sure he could win the title with four P2 finished in the last four races.

Hamilton qualified on Pole Position for the last four races and won all the events. At Brazil, an extremely wet track showed us an amazing race, with Hamilton unmatched out front and with Verstappen having an extraordinary outing, which included a fantastic final stint in which he recovered from an untimely pitstop to finish third.

In the finale at Abu Dhabi, Hamilton needed to win with Rosberg out of the podium, as the German entered the race with a 12-point lead. Hamilton did his best to help his cause, backing Rosberg into the path of Vettel and Verstappen, but Rosberg held his P2 to become the second son of a World Champion to reach the title glory (after Damon Hill, son of Graham, did it in 1996).

Rosberg achieved nine wins, eight Poles and 16 podiums to Hamilton’s 10 victories, 12 Poles and 17 podiums. However, Rosberg’s year was unblemished on the reliability and strategical sides and it was enough to beat Hamilton by five points.

Hamilton was gracious on the podium and congratulated his long-time rival. Rosberg, on his side, looked exhausted after the race and just days after achieving his childhood dream, he retired from the sport.

Ultimately, Mercedes won the World Constructors’ Championship way ahead of Red Bull, who beat the winless Ferrari to P2 and was consistently the second-best squad throughout 2016.

Ricciardo finished third in the WDC for the second time in his career.

Force India finished fourth behind Ferrari, achieving their best result in the WCC at the time with 173 points (they finished fourth again in 2017 with 187 points). Williams had one their last good years in 2016, finishing fifth with a podium by Valtteri Bottas in Canada.

McLaren had another difficult year and finished sixth, followed by Toro Rosso and the impressive Haas, which achieved a great sixth place in their first race with Romain Grosjean.  Renault, Sauber and Manor closed the field as the only teams with single-digit points in the WCC. Manor scored their only point in the 2016 Austrian Grand Prix, with Pascal Wehrlein finishing 10th.