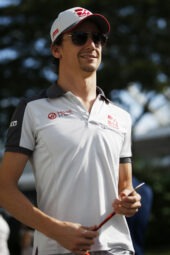 That was the general feeling from the 2013 season where Esteban Gutierrez was largely anonymous. The Mexican had a difficult start to his Formula 1 career and it was a surprise to many when it was announced he had been retained in 2014 alongside Adrian Sutil.

In a season where F1’s rookies came under fire for not being up to scratch, Gutierrez did initially look out of his depth despite a glowing review. His pace was considerably slower than his team-mate Nico Hulkenberg and he only scored 4 points in comparison to his team mates 51.

Things got worse in 2014, where Sauber produced one of the worst cars in their history. In both Sutil’s and Gutierrez’s hands, it failed to score a point.

The 23-year old has only been racing in cars since 2007, but he has a chequered CV. He finished second in the 2007 BMW USA championship, before winning the European version in 2008. 2009 saw him race alongside fellow F1 débutantes Valtteri Bottas and Jules Bianchi in the Formula Three Euroseries where he finished 9th in the championship.

A move to GP3 followed where he dominated the 2010 season and strolled to a comfortable championship victory, his second career championship.

Lotus was quick to sign him for the 2011 GP2 series, where he finished a disappointing 13th in the drivers’ standings. After a far better 2012 GP2 series it was widely rumoured that Gutierrez would be named a Lotus driver for 2013 alongside Kimi Raikkonen following the struggles of Romain Grosjean.

Lotus clearly felt he wasn't ready and Sauber picked him up. He has not been retained for 2015 and after two dismal years, it would be a surprise to see him in F1 again.

Gutierrez shows you around at the Nurburgring

F1 returns to the Nürburgring for the first time since 2013, so Esteban Gutierrez jumped in the simulator to help talk us through the track ahead of the Eifel Grand Prix! 👀..

Mercedes just couldn't wait for our first look at Mugello. So they grabbed Esteban Gutierrez and fired up the Simulator for our first laps! Come take a look at the home of this..

Esteban Gutierrez onboard at Sonoma Raceway

Go onboard with Esteban Gutierrez, Simulator and Development Driver, as he takes our Championship-winning Mercedes W07 for a spin at the 2019 Sonoma Speed

Robert Kubica has admitted that moving to a testing role at Ferrari is a possibility for 2019. The Pole's other major option in F1 for next year is to get a promotion to the race..

Esteban Gutierrez says he is trying to get back onto the F1 grid. The Mexican lost his Haas seat after the 2016 season, and since then has made appearances in Formula E and..

Mar.8 - Gene Haas thinks the F1 midfield will be a closely fought competition in 2017. The American team owner lends his surname to the small, Ferrari-linked F1 outfit, which for..

Feb.15 - Esteban Gutierrez admits a personal mistake meant he had to look outside of F1 for 2017 to continue his racing career. After a year out to be Ferrari's reserve driver,..