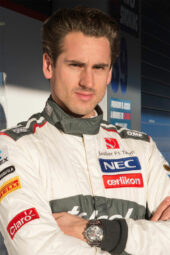 After a disastrous first season, it is a surprise that Adrian Sutil has lasted as long as he has in Formula 1. But fast forward seven years and the 31-year-old has proven to be a consistent performer, and an ever present at Force India.

Like many drivers at the back of the grid, Sutil wasn’t expected to be any more than a one season wonder when he signed for Spyker in 2007. He was notorious for crashing, but he was kept for 2008 when Spyker turned into Force India and he began to show flashes of talent.

His forte is wet weather racing and in Monaco he ran as high as fourth in the worst car on the grid in torrential conditions, before Kimi Raikkonen crashed into him and dashed any chances of a remarkable points finish. Still, Sutil had shown there is more to him than had previously been seen.

Force India clearly saw talent, as they kept Sutil on and off until 2013. He grew with the team and helped turn them from being the slowest car on the grid, to regular point’s finishers.

With age came experience and consistency, and Sutil was without doubt Force India’s leading man. His performances were rarely acclaimed, but you knew he would finish where he should. In 2010, he scored more than double the number of points of his team-mate, Vitantonio Liuzzi, while in 2011 he beat the much hyped Paul di Resta.

But like most consistent drivers, Sutil was never fancied as a race winner or a driver who could do something out of the ordinary. The German is a driver who will do what he should, nothing more and nothing less.

So 2012, Force India replaced him with Nico Hulkenberg but brought him back immediately in 2013 when the Hulk left for Sauber. However, it was clear that Force India has outgrown their former star and he left for good at the end of that season.

A miserable year at Sauber beckoned, where no points were scored in a dismal car. The team, blighted by financial problems, decided against keeping Sutil for 2015 which could end a consistent but not spectacular F1 career.

Sep.15 - Nico Hulkenberg is set to take over an unenviable record in formula one. In Singapore, the German is set to beat countryman Adrian Sutil's mantle as the driver with the..

Jan.14 - Once again as a new F1 season looms, there is legal trouble ahead for the Swiss team Sauber. Last year it was the high-profile dispute with Giedo van der Garde, and Swiss..

Nov.16 - Adrian Sutil admits his future beyond the forthcoming 2015 finale in Abu Dhabi is not clear. When Valtteri Bottas struck trouble with a back injury early this season,..

Sep.23 - F1's return to Suzuka circuit will be particularly poignant for Adrian Sutil. Last year in fading light and on a damp track, talented Frenchman Jules Bianchi slid off the..

Test driver Susie Wolff has admitted that she suffered a major blow when Williams announced that Adrian Sutil was to become their reserve driver. The Scottish racer will compete..

Adrian Sutil's legal dispute with Sauber is still ongoing. Late last year, although both the German driver as well as Giedo van der Garde had already signed contracts for 2015,..

After a quiet winter for the experienced 32-year-old, Adrian Sutil has kept his formula one dream alive. Some Le Mans rumours and a low-profile legal dispute with Sauber aside,..

Williams has signed German driver Adrian Sutil as its reserve driver for this season. Sutil raced for Sauber last year, but he was dropped in favour of Felipe Nasr and Marcus..

Adrian Sutil's manager has denied reports linking the German driver with a top Le Mans seat for 2015. The Swiss newspaper Blick reported this week that, after losing his place at..

Adrian Sutil could keep his top motor racing career alive in 2015 with a Le Mans seat. Late last year, the German veteran hinted he might take legal action against Sauber, as..