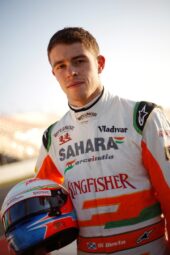 Make or break is an overused term but is sums up the 2013 season for Paul di Resta. The Scot is entering his third season in the sport, but has yet to finish ahead of his team mates in the championship come November. With moves to big teams expected in the future, di Resta needs to cement his tag as ‘the next big thing’.

In Britain we have always made hype around the 26 year-old, and his junior career merits it. In 2006 he became the Formula Three champion, beating his team mate and future F1 winner Sebastian Vettel. A strange career move saw him end up in DTM, where he eventually won the 2010 championship beating the likes of David Coulthard and Ralf Schumacher.

His talent was spotted by McLaren, for who he competed for at a test, and Force India, but Paul narrowly missed out on a race seat, although became test driver for Force India in 2010. Here he competed in several tests, replacing Adrian Sutil. In 2011 he was confirmed as a race driver and impressed alongside the vastly more experienced Sutil. A first point arrived in his first race after both Sauber were disqualified, and scored another point in his second race in Malaysia. After a dry mid-season, di Resta was back in the points in Hungary, Italy and Singapore, where he finished a career best 6th. 27 points saw him finish 13 the overall standings after an impressive first season.

With Nico Hulkenberg guaranteed to be a Force India driver for the 2012 season, the team had a decision regarding the second seat and whether they would retain the long serving Sutil or young di Resta. They retained the Scot and what a wise move it proved to be. A strong start to the season in an improved Force India car saw di Resta dominate his highly rated team mate. As the season progressed and di Resta impressed, there was a number of rumours linking him with big moves to Ferrari, Mercedes and McLaren. However it became increasingly apparent that no move was coming, and this coincided with a drop in form, while team mate Hulkenberg went from strength to strength.

Eventually he finished the season in 14th, although with 46 points it was his best ever season. Force India was quick to confirm di Resta in the team for 2013, and he will race alongside the returning Sutil. If the Brit can produce a whole season driving the way he was in the first half of 2012, a big move will surely be on the cards soon. However a lack of improvement could see him resigned to mid table teas for the baulk of his career. Only time will tell, but 2013 is make or break for di Resta. 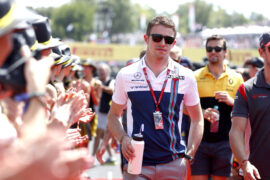 After 3,5 year he got his change to drive the Williams FW40 at the 2017 Hungarian grand prix to replace Felipe Massa who was ill and could not qualify for the race. During the 3rd practice he stepped out of his race car and wasn't able to go on.

Paul di Resta who was called to replace sick Martin Brundle to work as commentator for television, was again called by pregnant Claire Williams to replace Felipe Massa for the qualifying session and race. He only had driven the FW40 on the simulator and had to use Fellipe's setup. He qualified 19th and was only 0,766 sec slower then his team mate Lance Stroll who qualified 17th, which was a great result and got him huge respect.

Mika Hakkinen is sure that quadruple world champion Sebastian Vettel's Formula 1 career can carry on beyond 2020. It is reported that Ferrari has offered the German a new two-year..

As coronavirus and the associated and disproportionate hysteria grabs Formula 1 (and the world) by the you-know-whats, it's worth having a little think about who might be missing..

Valtteri Bottas may be lacking the "hunger" to beat Lewis Hamilton at Mercedes. That is the view of Mark Webber, who told Britain's Channel 4 that 2019 was "a tough season" for..

Oct.18 - Paddy Lowe is remaining quiet about Robert Kubica's chances of joining Williams in 2018. Recently, Pole Kubica followed up his Renault test duties with a run in Williams'..

Oct.12 - Williams is not releasing info about Robert Kubica's test that took place at Silverstone this week. All a spokesman for the British team would say about the Pole's run in..

Oct.6 - Felipe Massa has questioned the wisdom of Williams' apparent decision to hold a 'shootout' test between Robert Kubica and Paul di Resta. As it appears the duo are the..