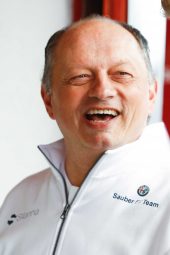 Alfa Romeo Sauber C37 on the grid with Charles Leclerc (2018)

In 1993 Suisse car owner Peter Sauber saw his dream come true when his Sauber team were admitted into Formula One. At last the popular owner had a Formula One car with his name splashed down the sides. His team have rarely threatened at the front of the grid, their only major challenge came in 2008 when they were called BMW Sauber, but Sauber are one of the more popular teams on the gird.

There forte has always been blooding young drivers. World Champion Kimi Raikkonen and race winner Felipe Massa have both started their careers with Sauber, while in recent years talented youngsters Nico Hulkenberg and Sergio Pérez have been given a chance. The team has always enjoyed a friendly relationship with Ferrari, who encourages their novices such as Massa to gain experience with the team.

Sauber have mainly been the ultimate midfield team with the odd podium here and there and consistently finish about 7th in the constructor’s standings. However when BMW came in 2006 they had the wish to win the title.

Robert Kubica had one of the biggest crashes ever seen in Formula 1. He crashed in to a wall at full speed during the 2007 Canadian GP and was unhurt. This severe crash showed the unbelievable strength of the carbon mono-cock  Formula 1 cars use to get through the safety test of the FIA.

With star driver Robert Kubica driving for them the team was in the hunt for the 2008 world championship, with Kubica winning the teams only ever race in Canada. Ultimately he fell short of winning the title as Lewis Hamilton and McLaren won , but it seemed a positive stride had been taken by the team.

However just a year later BMW announced their withdrawal from the sport and sold their share back to founder Peter Sauber. The team retook its original name and, unfortunately, retook its position back in the middle of the pack.

In 2012 they did had on of their best season ever as private team. Mexican driver Sergio Pérez was a right fit and unique car design of the C32 was remarkable narrow, which gave them a huge top speed advantage. Perez won 3 podiums with the car (Malaysia, Canada and Italy) and Sauber ended up on 6th place.

Financial problems have arisen for Sauber and they have been forced to sign young drivers who bring in lucrative sponsorship. Their future in the sport is unclear, but everyone will be pulling for one of the grids most popular teams. 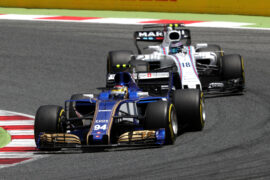 In 2017 Sauber went trough a financial crisis again. They had Marcus Ericsson (pay driver) and Pascal Wehrlein as their drivers that season. Ericsson didn't score a single point and retired 7 times. Former DTM champion Pascal Wehrlein who was connected with Mercedes scored 5 points for the team and retired only 3 times.

The team ended up on 10th and last place in the 2017 constructors championship. Half way the season Sauber's team principal Monisha Kaltenborn was replaced by Eric Vasseur, who switched over as team principal at the Renault F1 team and Sauber closed a deal with Ferrari to become their B-team for 2018.

In 2018 Pascal Wehrlein was replaced by Ferrari young driver program member Charles Leclerc who became the 2017 GP2 Champ and is regarded as one of the biggest talents for the future.

Part of the Ferrari deal was that the Sauber team name would change to Alfa Romeo Sauber F1 and that the cars of 2018 would get the newest Ferrari engine spec. instead of last years.

For the 2019 season the team name of Sauber changed to Alfa Romeo Racing just before the launch of their C39 car. All information about that team had to be place on a new page.

Nov.6 - Sauber, the company that races in F1 as Alfa Romeo, will remain an independent team. That is the insistence of boss Frederic Vasseur, countering the widely held narrative..

Sauber Motorsport celebrates half a century of history today, as the company marks the 50th anniversary of its founding on the 15th of May, 1970. Since that day, when Peter Sauber..

F1's Swiss-based team will survive even if it loses its Alfa Romeo backing. That is the claim of Ossi Oikarinen, a former BMW Sauber engineer who is now a pundit for Finnish..

Marcus Ericsson is disappointed F1's driver weight rule change arrived a year late for him. The Swede, whose 2018 teammate Charles Leclerc progressed from Sauber to Ferrari for..

Female driver to race in Formula 2

Peter Sauber has admitted that the departure of his surname from formula one "hurts". The 75-year-old Swiss, no longer involved with the Hinwil based team he founded, was on hand..

As last team of the grid, Alfa Romeo Racing (former Sauber) has revealed their C38 F1 car. The car will also be tested for the first time this year at Catalunya

Fiat Chrysler could buy the team formerly known as Sauber. Earlier, it was announced that after more than a quarter of a century on the grid, the Sauber name will be replaced..

Sauber - now called Alfa Romeo - could have a surprise in store with the design of its 2019 car. That is the claim of Italy's La Gazzetta dello Sport. The authoritative sports..